So forty years ago..

Right. After yesterday's post it was time to give the whole thing a go. For the purposes of this game I used the Litiana Bridge scenario (Commandos attacking Vichy French holding a bridge in Syria in 1941), substituting XIVth Army and Japanese. I attached labels to the back of the bases so that I could mark them up with the values from the original counters.

Phil was my guinea pig. Alas, unlike everyone else, he completely avoided SPI games in the 1970s and since, so he took some time getting up to speed. As did I. The SPI rule writing methodology doesn't take any prisoners.

I took the Japanese defenders, and deployed first. I dropped the indirect fire forces for the defenders to make things simpler. 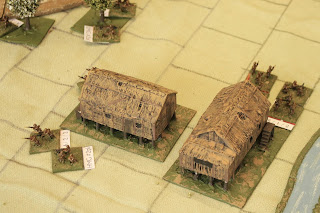 I had two platoons and I needed to hold onto the buildings and the bridge. I had to deploy all on one side of the river, within 4 squares/hexes of it. I got that a bit wrong. Some of my stuff was more than 4 spaces away. I put most of one platoon into the buildings. It looked nice. 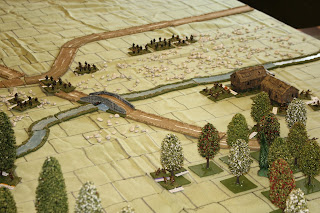 Phil had two thirds of his force across the river deployed within 4 spaces of the river on that side, and the remaining third coming on in the bottom right corner on my side of the river, just out of shot of the picture. The areas marked with pebbles are rough going that slow you down, but offer no cover. The trees are all heavy cover.

My troops were all out of command on the first turn, so Phil got a free turn's firing with no reply. He did a fair amount of damage, but I was mostly okay as all my stuff was in decent cover. 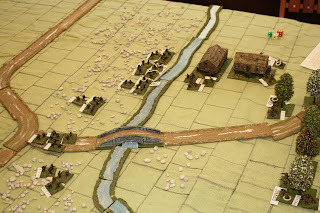 Phil pushed up to the river line so he could close assault the following turn. He has 6 Movement Points, and the river takes 4 to cross. Alas you need 3 MPs to enter the buildings, which neither of us realised at the time, so it would take another turn. Meanwhile, out of shot to the right, his other platoon is sneaking up through the trees. 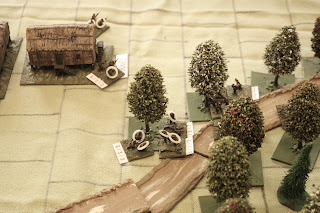 This enables him to get in and close assault me, as his other troops were drawing all the fire. 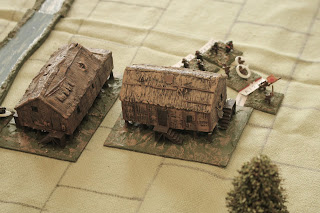 He was also able to mass enough firepower to shoot his way into the buildings. 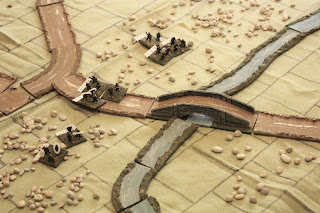 I was able to pin his other troops in place the other side of the bridge, but couldn't inflict enough damage to drive them back. 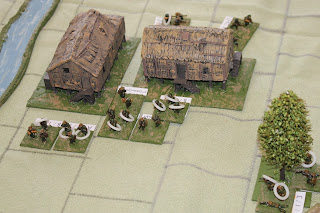 Phil was then able to occupy the buildings fully, which meant I had to get figures onto the bridge to force a draw, or kick him out of the buildings. 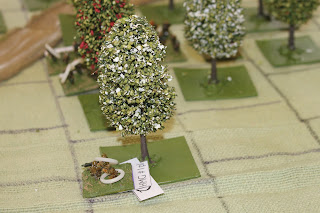 One of my last hopes was my HMGs in the trees, but they took a lashing. As fire is not simultaneous even with Overwatch fire, you can get wiped out before you can return fire. As happened here. 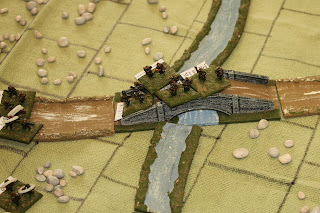 Which meant that Phil was able to occupy the bridge and take a win.

Thoughts? Well, it would have been more balanced if I'd used the mines and the indirect fire, but I thought it was a hard task for the Brits, attacking with odds of 3:2. This proved not to be the case, partly because when they got in close their high preponderance of sub-machine guns was telling. Also, the layout of the table made it hard for me to set up interlocking fields of fire. The system, as I said above, has non-simultaneous fire so winning the initiative for shooting is important. I also forgot to apply the "MG Cone of Fire" rule in the first part of the game, which would have shot up a lot more of Phil's chaps across the river.

The game has some issues. The idea of rolling to see who fires first and who moves first is just bearable, but you also have to do this for each round of close assault, and you have to say exactly which base you are firing at, rather than just shooting at a square. You also really need to understand the rules and study the scenario for the thing to work well. Admittedly this scenario was a blood bath historically, but fighting this game over open terrain isn't a bundle of laughs. There is too much certainty with the CRT at the left hand end. Firing four bases at a unit in the open will kill it, regardless of dice rolled, for example. And you have to get the interplay of Direct Fire, Overwatch Fire, Movement and Opportunity Fire right for the game to make sense of it all. It's also confusing that facing is important for MGs, but they also seem to fight when attacked from the rear at full effect.

But then again I don't think the rules are any more complicated than PBI or IABSM. In many ways they are simpler, - much simpler than "Sniper!" and do provide a platform for quite a good company level game.

I would play it again, - in fact I will play it again - but I don't think it will fight its way onto the roster of rules we use for low level combat. Phil tried really hard, but it isn't pushing a lot of the right buttons for him. The thing is you really need to learn this properly to get it to work right, and I don't think any of us has the enthusiasm to try. It's a game that's nearly 40 years old. The world has moved on.

NB Rifle/SMG bases take 4 hits to kill, HMGs 3 and LMGs 2. Hits on the bases were marked with white rings. There's a reorganisation phase that lets you re-man the MGs if they aren't completely wiped out in a urn.