So I bit the bullet on the rebasing. I did a trial batch of Imp infantry and they came away okay after a good 12 hour plus soaking. They needed a bit of cleaning up, but have now been re-glued to their new size bases. I'm sufficiently happy with the look to move forward with a few of the British regiments. These are more of a concern. I can afford to make a complete cock up of one Imp unit as I've got hordes of them, but the Brits are a one for one unit recreation of the 1859/60 expeditionary force, so they have to come away unscathed. 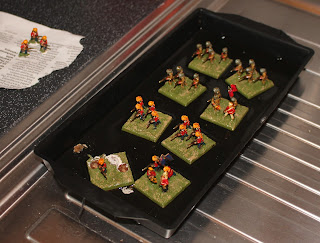 For starters on this front a couple of Sikh regiments have gone into the foot bath. That's because I can then clean the paint off the spares and use them as EVA infantry as they wore western uniforms with turbans/head dresses. I'm using a plastic tray that once had oasis in it, - that foamy stuff that florists use for floral arrangements. The trays are designed to keep the oasis moist, so pretty much perfect for standing the bases in water. After a couple of hours soaking I was able to lever a few figures off, but then decided it was best to leave them overnight. 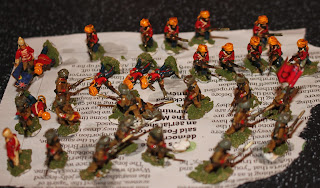 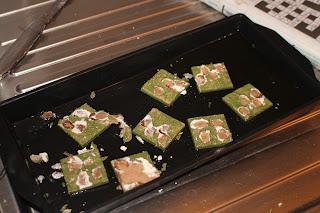 As you can see from the above couple of pictures they came off pretty smoothly. Apart from one base, where I may have used superglue, which needed some intervention by my trusty penknife the figures all peeled away from the mdf bases with little pressure. As Mr "Bruno" Brunavs, my chemistry master at O Level taught me, water is the universal solvent.

What has precipitated this action was Mr Friday's suggestion I look at the Lancashire Games website. After it being out of action most of the weekend it was back up and running today and they seemed to do most of what I wanted in their 15mm 19th Century Europe (1860-1880) range for the French expeditionary force. They also had a sale on, so it was a good time to dive in and buy up what I needed. I therefore had to come to a conclusion of unit size, - 16 or 12 men per regiment/battalion? Being a cheap skate I've gone for 12, so hence the need to rebase.

I only hope the figure sizes are compatible.

The other upside for all of this is that these figures will be based the same as the Chileans/Peruvians and so if I lurch into mid-late 19th century European warfare I've got a basis for some rules as well.

This has lead me to thinking further. I do like the look of three 15mm figures on a 30mm frontage, rather than the normal four on 40mm or on the 30mm x 30mm squares for pre-modern eras. My post WW1 stuff still looks right on the square bases, but I'm beginning to wonder seriously about my other 15mm armies I've done in RFCM style.

Could be I have an on-going project ahead of me.
Posted by Trebian at 12:04

Email ThisBlogThis!Share to TwitterShare to FacebookShare to Pinterest
Labels: rebasing