"Am I Boring you?" The Wednesday Worthing Ambush 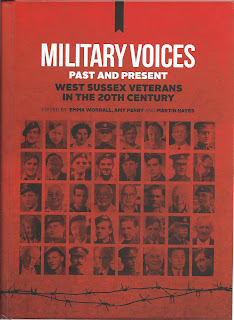 As I have written before my grandfather was wounded on the First Day of the Somme, and left a set of memoirs of his experiences. He also left us with a good selection of photographs and documents. In addition to being interviewed by Martin Middlebrook he also took part in a BBC radio documentary in 1976. What we were less aware of was that he was also interviewed at length by a local history teacher in Worthing, Peter Barker, who in the mid-1980s tracked down and interviewed all the Great War veterans he could find who lived or had retired in the West Sussex area, of which there were 32. These tapes were then used in history lessons at the school where Peter taught.

A couple of years ago, contemplating his retirement, Peter offered the tapes to the Worthing Library Service who were only too happy to add them to their archives. Their reaction, in fact, was beyond creditable. Not only did they take the recordings, digitise them and store them, they also decided to create an oral history project to obtain further interviews from veterans in West Sussex from any other conflicts of the 20th century. In addition they also researched the original 32 veterans to provide further background. During this research they came across me (through the blog postings) and my brother, through The Great War Forum. We were able to share further details and photographs.

After all this hard work the project had a book and website launch last Wednesday in Worthing Library, so we headed down south to take part. I haven't visited Worthing for nearly 30 years now, not since my Grandfather's funeral. It was a bit emotional, although a lot has changed.

So many people were involved that they had to do the launch twice, once in the morning and once in the afternoon. We got to say something on behalf of the family, - me in the morning and my brother in after lunch. I hadn't written anything specific down, but I'd got my thoughts lined up and made 5 bullet points in my pocket notebook. I only had 5 minutes anyway.

We had the usual introduction from the Project Sponsor and the Project Manager who explained about Peter's tapes and how they'd gone about getting the funding from the National Lottery and the Armed Forces Covenant and expanding the project to the whole 20th century. The project has two parts, a website with clips of audio and also a book, which has biographies and further information on all of the interviewees. The book is almost like a user guide for the website, and there'll be copies sent to every school in West Sussex, and also held in all West Sussex libraries and museums. It's intended as a reference work, and the initial intention wasn't to sell any (there are rules about using Lottery funding for a commercial enterprise, apparently).

After all of that the techie lady got up to do the website demo and play a few audio clips. There's one from a woman who was a code breaker at Bletchley Park, a pilot running Exocet drills for the Navy during the Falklands Campaign, a marine reflecting upon being given his Green Beret and then finally she says something like "This last clip is of Walter Evans. He was our favourite and we all came to love him, particularly the way he asks the interviewer 'Am I boring you?' part way through".

Then she clicks the link, and my Grandad's voice comes out crystal clear, like he's sitting next to me "You see whistles blew at 7.30am, zero hour. Whistles blew and they said 'go on, over the top, over the top' and of course we got up the short scaling ladders we had...." and it's like he's never been away. I'd never heard the recording before, and didn't really know anything of Peter and his project, and then there's tear's filling my eyes, and he describes being shot and trying to crawl to safety, and he pauses and says "am I boring you?" And I can see his eyes twinkling as he teases the interviewer and I've gone to pieces. Then it stops and Emma says "And now a few words from one of Walter's grandsons..."

I'm not often lost for words, but that was tough. Everything I was going to say seemed irrelevant, so I said some other things, about how only 110 of his regiment got back  out of 650, and he wasn't one, how he lay in no-man's land for days before being found by some stretcher bearers, how the ambulance driver who took him to hospital was a Quaker who couldn't abide swearing so they didn't swear, and how you can never know what someone who has gone would want, but that this is what he would want, for the story to be told, and how he inscribed my brother's copy of Middlebrook's book with that well known quote from the philosopher George Santayana "Those who cannot remember the past are condemned to repeat it" and how we all loved him as did anyone who met him. And a load of other stuff too.

Apparently I went on for more than 10 minutes. Normally I can talk for an allotted time precisely, but having been ambushed by my Grandfather through a recording I'd never heard before I was not completely in control of myself.

And then they presented all the veterans and volunteers with copies of the book (I got one too, but felt a bit of a fraud accepting it). It's a weighty book, over 500 pages. A brilliant job done by the project team

They've put together a website with some of the choicest bits of oral history here.  My grandfather's picture is on the front page. That's him on the left, in 1915 at the age of 22 or 23.

My grandfather's testimony about the first day on the Somme that reduced me to tears is here.

The book is available for £10 from libraries in West Sussex, which is a ludicrously cheap price for something with so much information and work in it. They weren't sure about postal sales, but if you contact West Sussex Library Services through this link I'm sure they can sort it out for you. They've only got 400 copies spare, so don't hang about.
Posted by Trebian at 11:18