I had Shedquarters newbie Gary over for a game or two on Thursday. We had resolved to play SPI's "Raid!" as Gary likes SPI games, and I transposed it into a toy soldier game, because I like them.

WE played a couple of the simple scenarios to get a hang of the rules. 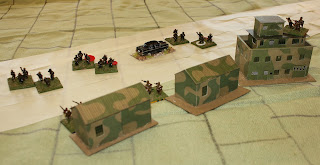 First of was "Raid on Entebbe". This is a two turn game where 6 Israeli fire teams try to destroy 3 Ugandan equivalents. It's fast and furious and not as dumb as it sounds.

The Ugandans are in the airport buildings, the Israelis out on the runway. I assume as this is classified as "Medium" terrain that there are supposed to be aircraft and such like on it. I just put out my black Mercedes Dictator car for show. If memory serves the Israelis took one with them on the raid to dupe the defenders into thinking Idi Amin was paying a visit.

I was the Ugandans and got first fire, which was lucky, and suppressed two bases in the middle of the runway (red markers) and hit one base on the right hand end (white ring, - and also a suppression marker). Suppression prevents movement and gives a negative modifier on fire. 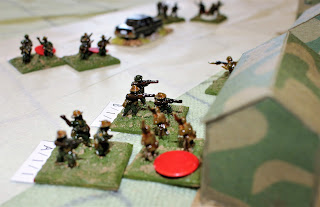 Gary returned fire with his suppressed units, hitting one of my bases (it may have been two, - one out of shot at the other end) and then close assaulted my left.  After a few rounds of fighting my base had been eliminated, leaving the Israelis in possession of the left hand end of my line. 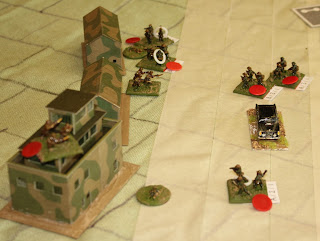 I can't quite get the sequence here (pathetic, I know, for a two turn game) but I was able to use opportunity fire on the group attacking the control tower and kill it. Either that or I did for him in close assault. Probably the latter. 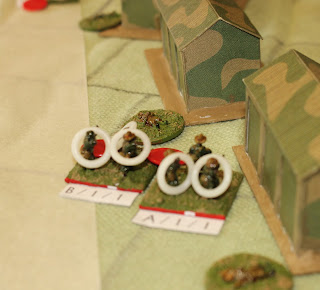 In turn two the two Israeli units from the left hand end then stormed into the next square of buildings, and did for the defenders. They had earlier managed to shoot at and suppress one of the bases on the runway. 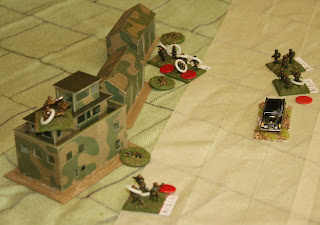 The bases in the middle had shot in support of the central close assault and so couldn't fire at the control tower. This had greatly helped the central assault, but condemned the group attacking he tower to being gunned down on the runway as they charged the building.

Win for the Ugandans. Then we swapped over to see how we would do with the other side each. 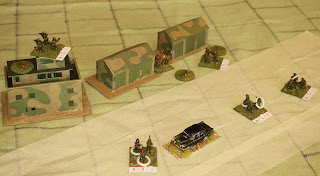 Gary spread his opening fire fairly thinly, so I was able to close assault in turn one, after a solid round of suppressive fire from the units he had hit but not killed. This meant I was mostly going into action with an advantage for the first round of combat. I had wins at the left and right hand ends, and took a beating in the middle. 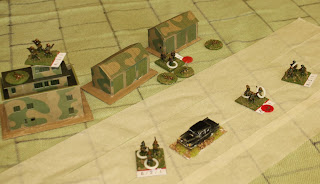 Not a problem as I then rolled him up in turn two, having comprehensively shot up the defenders. Solid win for the Israelis.

We realised we weren't quite playing the firing correctly. The Israelis are armed with "Auto" weapons, and the Ugandans with "Semi", so have a CRT* shift advantage, as well as a DRM**. We also came across one of those stupid situations where a base can't do any more damage but the enemy has to get a 6 to kill it. In theory hand to hand like that could go on forever. I'm not sure you should ever be in a position where you can't do any damage at all. In practical terms we were talking about one individual firing at very close range at a group of three people in a building and completely unable to kill any one at all. Doesn't feel quite right for a tactical game.

Anyway, having mastered the basic scenario (we thought) we moved onto something more complicated, - the raid on the Son Tay camp by US forces to free prisoners from the Vietnamese. 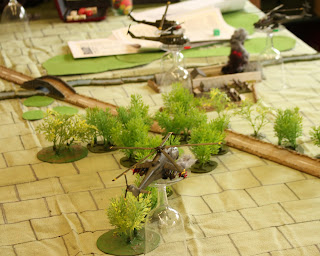 The US force of 6 fire teams and one platoon commander are delivered by four transports, supported by one gunship. The Vietnamese have 12 fire teams but no command. The US forces have to break into the compound, free any prisoners there***, kill all the defenders then escape having only lost the equivalent of one fire team.

I started by attacking the compound buildings with my helicopter gunship rockets. 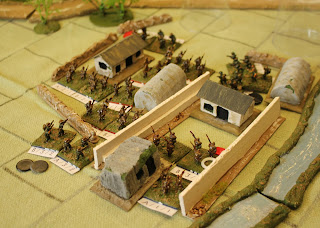 My forces then landed, - bottom left, top right and top left. The black markers are demolition charges for the walls. As the Vietnamese have no command structure they can't fire in the direct fire phase. They also aren't allowed opportunity fire in the first couple of turns. That's pretty good for the US forces, but the killer is they are allowed overwatch fire. Consequently the moment the US forces open fire they get absolutely swamped with small arms fire. 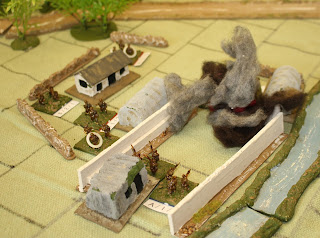 I blew in the wall of the compound, and attempted to shoot my way in. However the returning overwatch fire wiped out the groups outside the base. By this point I had lost more than four men (ie one fire base) and the best I could hope for was a draw. I fought my way into the compound and did a lot of damage, but eventually everyone ended up dead.

We reset and played again. I swapped my tactics slightly, making better use of the gunship and not firing until I really had to and only close assaulting after the gunship had softened up the target. Alas the gunships only get three rounds of HMG fire and two rocket attacks. Still got beat.

It was when we were tidying up that Gary noticed we'd been playing the HMGs from the gunship wrong. They actually hit three squares/hexes in a row, not just one. That means that if you line it up right, and don't do anything with the infantry for the first three turns you can take out 9 defending fire teams with the gunship as you are guaranteed to destroy a base per shot. The rockets them can badly damage another two. That takes 5 moves of time, so you probably need to be fighting your way in as well as you have only 7 turns to blow in the compound wall, search it and then exit. It's a tight scenario as the Vietnamese only need to be lucky once or twice and you've taken 4 hits. I may replay it solo.

Although this isn't the most complicated tactical game - the rules are shorter than PBI, IABSM and Crossfire - they are quite involved and it is easy to forget stuff as I have in all the games I've played. Clearly repeated playings are needed to learn the game, but I think Gary is less inclined to do this than he was previously. He prefers strategic/operational games, and I'm good to go with those on my gaming outings with him, as I can get enough tactical stuff from my local group.

There are quite good things in the game. I like the simple command and control system and the way that units out of command can only react through opportunity/overwatch fire. The single CRT with simple modifiers is handy, but in the end there isn't enough variation. When things are most favourable you can't miss, and when things are bad you can't hit. It is also odd that when firing into a zone you can completely wipe out one base in the square/hex, but the others are unaffected, - not suppressed or pinned at all. And the close assault system rolling to see who hits first in each round of combat is nearly unworkable at times.

Other thoughts? Well, it transferred okay as a figure game, and possibly if I had Hexon tiles I'd look at it more. My squares were a little tight once I'd popped terrain on them. It looked good, however. Helicopters on wine glasses is always a winning combination. And the scenarios are interesting. I think I might revisit them for games with PBI or perhaps even an "AK47 Republic" variant.

But it has certainly made me wonder even more why our group has never developed our own rules for such games.