My DBA army for the Khmer Empire (III/23) is now finished. I used Irregular Miniature figures, and purchased all the options, because I'm like that. And who wouldn't want Maiden Guard and Cavalry or a bolt shooter on an elephant or men waving what looks like a garden hoe. 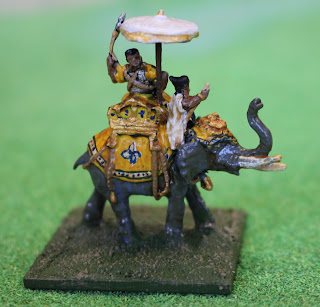 First off we have an Elephant with a General on it (Irregular Miniatures V36). Whilst we have good information of the physical look of the medieval Khmer Army because of the wall carvings at the various temples I wrote about earlier we don't really have any information on the colours. In the end I based mine on the colours worn in traditional Cambodian ballet performances. Kings are usually depicted in Gold/Yellow. We also have a report that one of the Khmer kings as encased in metal, so he's got an iron breast plate. Traditionally only Khmer Royalty could carry a White Umbrella, so that rounded him off.

Alas on my figure the umbrella pole broke off during cleaning, so I had to drill out a hole and insert some wire. Probably for the best any way. 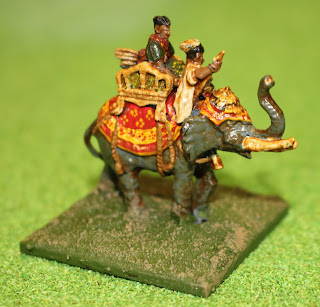 Next we have an Elephant (El) element (Irregular Miniatures V37). As the Khmer army reportedly based its tactics on a solid mass on elephants drawn up in the middle of the army, only having two in the army (this one plus the General) is less than generous. The overall colour theme for the army is red as, again, soldiers in Cambodian ballets seemed to be dressed in red. The King's trusted councillor is often in Green, so command type figures in the army are in green, like the chap on this elephant. 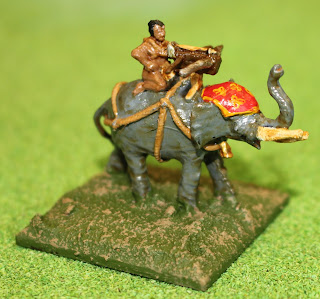 The army allows you to have a bolt-shooter (Art), and as the carvings at Angkor have one on an elephant (Irregular Miniatures V38) it would be rude not to have one. 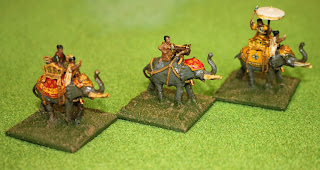 At least in that way it looks like you are fielding 3 elephants. 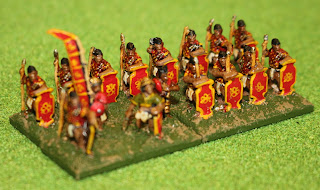 The main body of the infantry are spearmen with long shields (4Ax). These are Irregular Miniatures V38, plus V49, V50 & V51 making a command stand. These are mainly in red, with a green officer but wearing plain linen loin cloths. There's really nothing on Khmer heraldry but they did seem to use flower like symbols, so my army has interlocking figures of eight to give that impression on shields and such like, or clusters of 4 dots on clothing. By  the way I don't see why these would be classified as Auxilia (Ax) and not Spears (Sp). I've read the same sources as the list designer and looked at the same pictures and they look like formed foot to me. 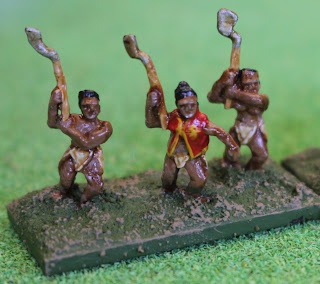 These are Ph'kak men (3Bd), Khmer warriors armed with the traditional axe like implement (Irregular Miniatures V47). As you can see in the one code Ian Kay of Irregular gives a variety of poses and clothing. This is an odd looking weapon and it is hard to see how it would be of much use in any walk of life. Not sure why these are Bd and not Wb. 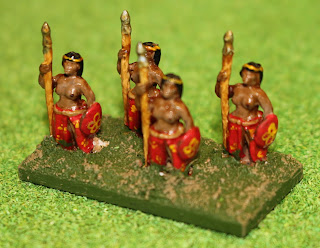 These are one incarnation of the Maiden Guard (4Ax). I don't recall much evidence for these in the carvings we saw (Irregular Miniatures V45). The army list desciption says that they were armed with ph'kaks but not a lot of evidence about. The ph'kak may well have been ceremonial rather than practical. 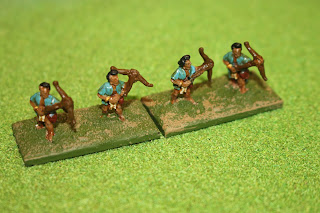 For the two bases of crossbow armed psiloi (Irregular Miniatures V52) I departed from the red colour scheme and went sort of blue. Watching Cambodian folk dancing as opposed to traditional ballet the men usually wear blue, although a deeper shade than this one, so I thought that would do for irregular type foot. 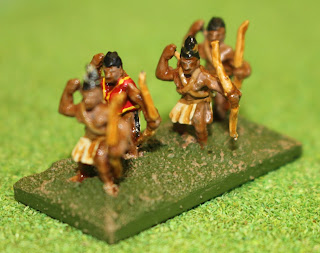 These are "archers with pavises" (4Bw) in the army list, but as you can see I didn't bother with the pavises as the figure (Irregular Miniatures V48) doesn't come with one. Don't know why the list insists on the pavise as it comes from one single carving and there are more pictures of them without. 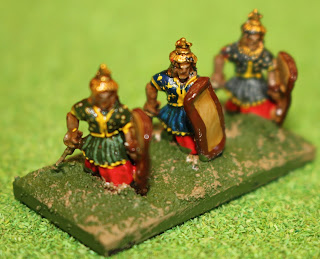 There'll be more of these fellows in my next army as they are Thai (Siamese) mercenaries (3Wb). I can't see me ever using them as they're in the queue behind the elephant bolt thrower and the Maiden Guard. These figures are Irregular Miniatures V55 - "Thai Spearman" although the castings have swords not spears, mostly. 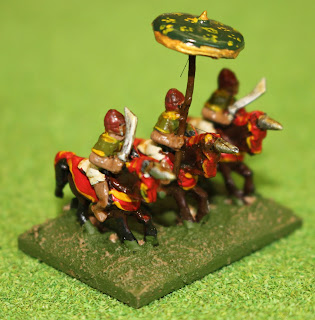 These are the compulsory cavalry unit (Cv). I have a problem with this in the army as the jury is definitely out as to whether the reliefs show cavalry units or command staff. They don't seem to show units, and the Khmer had many elephants and few horses, which had to be imported from India. This group are mounted on "Dragon" horses and also have a "standard bearer", who has a parasol. (Irregular Miniatures V39 and V40). The evidence for Dragon Horses in Khmer armies is pretty thin as well, but having once been mentioned it becomes something "every wargamer knows", so they're accepted. Personally I think these should be an optional element, allowing the way for another elephant. I painted them in green tunics to indicate their officer status. 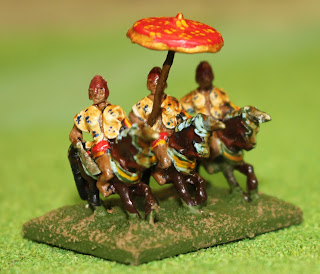 Finally we have the mounted version of the Maiden Guard (Cv). The evidence for these as a unit is even weaker, but hey-ho, that's what you've got (Irregular Miniatures V41 and V42) 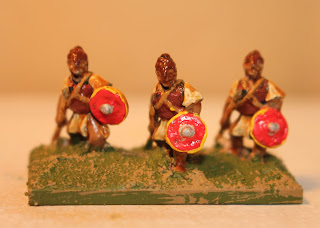 For reasons beyond my comprehension these fellows got missed from the original photo shoot. They are "small shield spearmen" (3Ax). They are wearing the curious tubular armour you see on the carvings, held in place it seems by cords or ropes. I have chosen to paint the armour as buffalo leather, and the helmets likewise, as I think the accounts such as we have point to the King's metal armour being quite a thing, so not likely to be seen elsewhere (Irregular Miniatures V44). 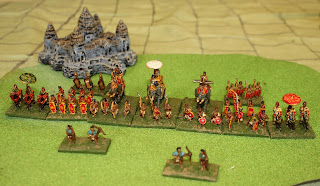 Finally here's all the chaps (and chapesses) all lined up together, with my mini Angkor Wat in the background.

I think it's a nice looking army, and my painting and photos haven't really done justice to it. As indicated above I have an issue with the army list, which I think should look more like this:

Given longer time to thing I might change it even more.

BTW I see that the DBA list covers both Khmer & Cham (the Muslim rules of the Vietnam area of the time). I can't see why that is the case. They each deserve to be treated separately and the Cham as depicted on the reliefs are distinct, - mainly from their helmets/head pieces which look like they are made from overlapping scales. These are ubiquitous, and aren't worn by the Khmer. This means you can't use the same figures for both armies. Reading the description in the army list and having possession of all the quoted references, I feel that this list and the statements about it are pushing our knowledge to the boundaries.

Anyway, on now to the Siamese,  who sit undercoated on my painting desk.