This last weekend - 6/7 May - was Campaign at Milton Keynes. This is an odd little show, and one of my favourites. It's odd because it's free entry, and it is also in the middle of a shopping centre. This means you get lots of the general public, not just hard core wargamers come and stop at the stand. If there was ever a show that was about spreading the hobby, it's Campaign, and not the likes of Salute or Partizan.

The show has a lot of competition games going on, a goodly number of display and participation games and a nice selection of trade stands. Alas the operators of "Centre:MK" have mucked the local club about over the last few years. I heard that they only got the go ahead in February this year, and that sort of thing scares off the traders. Next year is also in doubt at they're talking about putting in retractable seating. Having said that I had a good chat with Dave Lanchester and he was very positive and had a very good weekend for sales 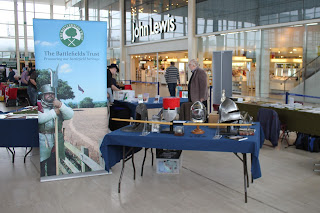 I was there with Phil & Will promoting the Society of Ancients, the Northampton Battlefields Society and the Battlefields Trust. We had my "Northampton 1460" game up, plus Phil's Naseby model and also the display version of "Call it Qids" the Society of Ancients rather good game of the Battle of Kadesh (limited numbers still available, I believe). 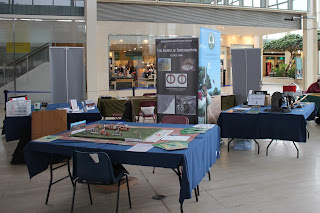 We also had our display table of armour, weapons and awards. On the Sunday we even had a medieval re-enactor fletching arrows.

I ran the game probably a dozen times on the Saturday and perhaps 5 or 6 on Sunday. Mostly the Yorkists won, but we had a couple of messy draws as well. 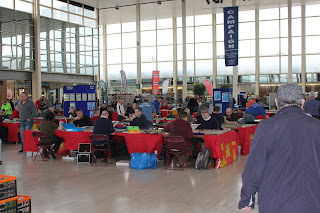 The centre of the hall was taken up by the various tournament games. Lots of very intense activity, and nice to see some people with armies in metal tool boxes. 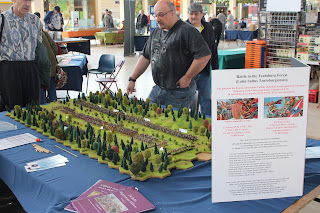 Next to us was this game of Romans blundering around in Teutoberg Forest with DBMM. Much as I don't really like the hexes it did look a nice little game and the guys running it worked hard to involve the public. 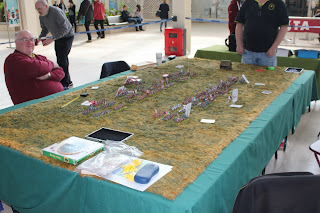 On the other side of us was, I think, the Battle of Barnet. I'm not a fan of the teddy-bear fur terrain, but the figures were nice. My big disappointment with this is the table clutter near the camera. That sat there most of the day on both days. It doesn't look good, guys, sorry. 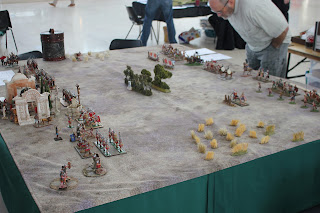 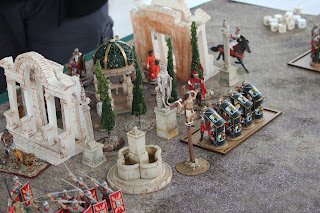 I wasn't entirely sure what was going on, but the Romans were defending some temple with some nobles in or something like that. The crew running this were chatty with the public and tried to get people involved. Good work. 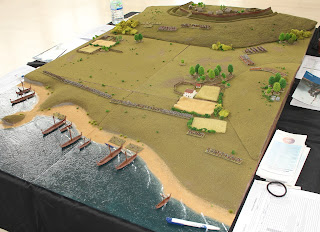 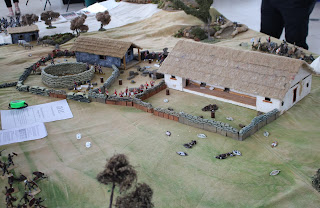 Next to them was a 54mm Rorke's Drift game. This did look good, but have a look at that picture. Why is there a set of rules and a fluorescent green tape measure slap bang in the middle of the table? And they weren't there for a little while either. Shame as they've obviously gone to a lot of trouble. Nice looking Zulus. I didn't play, but the grapevine says it was a fun game. 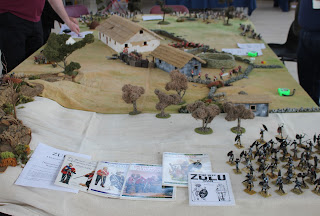 Here's a longer shot of the table, alas still marred by the clutter. 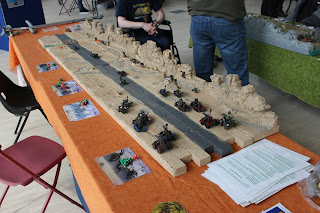 I don't know anything about this fantasy motor cycle race game as no one was running it. 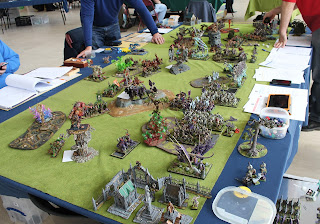 Elsewhere there were some big fantasy games. Again, not sure what is going on here but the chaps playing it seemed to be enjoying themselves. 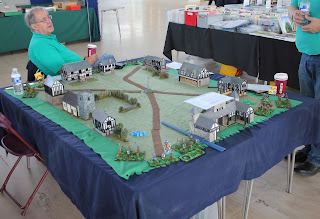 Lance & Longbow Society had a 40mm medieval game run by the boys from Tring. Good bunch of lads and a nice looking game 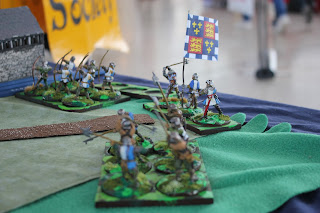 It's a shame that I have so little time to play games when I go to a show these days. I've also missed pictures of a few eye-catchers as well.

So, a good weekend, which I hope will be back next year.