PBI in the desert

After we'd had a go at Paraitacene we turned our attention to the Vichy French holdings in North Africa. Phil had brought along his tiles and hills and I provided the white buildings and most of the palm trees.

This was a PBI scenario aimed at getting Phil's rather tasty Vichy FFL and Italian Desert Forces (newly bolstered by some Bring & Buy purchases at Campaign) onto the table. I got the French, Richard got some German paratroops and the Italians.

The central aim of the game was to capture the broken down Tiger tank in the middle of the board. 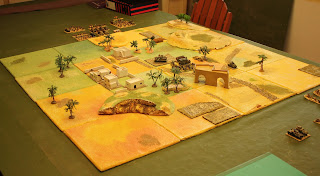 I came on, mostly, from the left hand edge, but I had some armoured cars who also turned up from the right hand corner. I also had some Arab partisans, hiding out in the black limo (see below). Quite by chance I put this in the area which ended up being the most heavily defended. What I really wanted to do was shoot up the defenders, then have the Arabs pounce from the neighbouring square. As it was I opened up on a square that had both mine and Richard's forces in it, and inevitably killed one of my own. To make it even worse, of course, it turned out to be their leader. 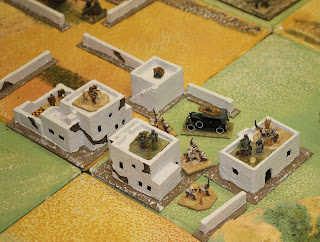 I was able to get some of my FFL into the buildings on the left, then the Arabs leaped out of the car and started to hack at the defenders.... 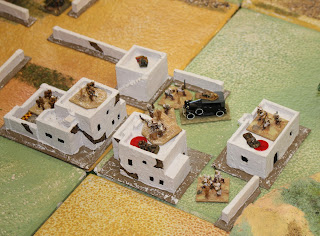 ....some of whom fell in pools of blood. Having wiped out the defenders, you'll be pleased to know I failed the morale test the next turn and had to withdraw from the square. 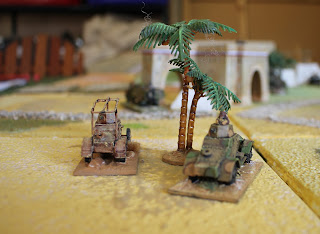 My armoured cars then pulled up and blazed away ineffectually at a truck with an autocannon on the back. Failing to knock it out or kill the crew turned out to be unfortunate. 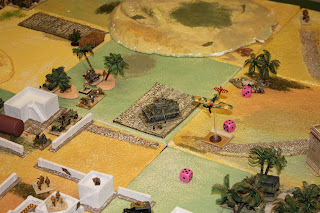 Talking of being unfortunate my airstrike ended up shooting up empty squares as well. Curses. 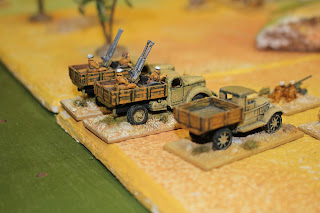 I did get some reinforcements on (that cursed PBI reinforcement mechanism that ensures you can bring many toys to the table but you can't get them on) and they're jolly nice AA guns in trucks. All of my other stuff stayed resolutely off the table edge. 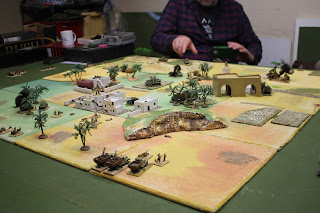 Richard got some reinforcements on too, up in the top left hand corner. I had a run of those dice rolls when you end up motivating troops with 1AP or not motivating at all, and them achieving lots of hits which are them saved (or in my case, not saved). I think that the PBI motivation system which piles disappointment upon disappointment can be a trifle wearing sometimes. 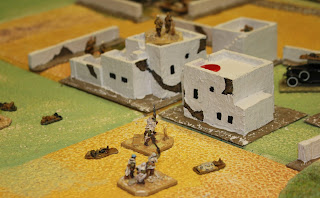 As it was the lack of APs on my side and an abundance on Richard's lead to my main forces getting caught in the open and shot up quite badly. By now it was getting late, and Richard needed to leave for the West Country. In any event, I think I had been comprehensively stuffed, and it was just a case of playing out the end game from here. Phil's more detailed report with more pictures can be found here.

I continue to have a love/hate relationship with PBI. It winds me up something rotten from time to time, and whilst it isn't broken the Motivate/Activate sequence is now a bit much. I'm inclined to prefer a command radius type of Motivation approach and then use average dice for APs. On the other hand I haven't seen anything I prefer to it. PBIs zonal system has a lot going for it, for a start.

The low level modern (say 1930 -45) game is one area where we/I play games and we/I have never gone as far as writing our own rules. Perhaps once I'm through the current projects I'll take a look.