Honestly, the Coke experiment was a disappointment. The paint that did come away needed a good scrape to remove it, and anything in undercuts was immovable.

So, back to the drawing board. Clearly I needed to get a bit more professional. In the last post on this subject Rumblestrip recommended "Nitromors", which is a paint and varnish removing gel so should do the job.

My visit to the local DIY superstore, Homebase, revealed a profusion of potential products, In the end I went for their own brand, for two reasons:

The main downsides seem to be:

1) It is more expensive than Coke
2) You can't drink it, even with rum in it. 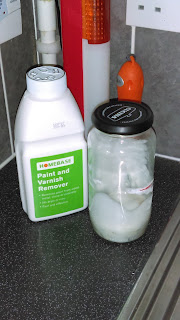 Anyhow, I put the figures to be cleaned in a jar and topped it up with the cleaner. And put the top on, because this stuff gives off fumes.

As you can see it's a sort of white colour.

After a few hours it started to go a bit browny/greeny, so I gave it a shake to mix it all up. It was clear that flakes of paint were coming off.

You are supposed to leave it for 40 minutes. I took a few samples out with tweezers after an hour and gave them a quick scrub with an old tooth brush and they came up nice and clean. I think I have a difference between figures that were undercoated in grey car paint primer and those where I used thinned black Dulux, but I'm not sure. I couldn't tell at this point if the metal on some of them had become pitted by the process. However on reflection they looked okay.

So I left the jar overnight and by the morning it was definitely
that green/brown vomit colour you got at primary school when you mixed all the colours together during an art lesson to see what it would look like and then got told off by Mrs Stuart because no matter no hard you try there aren't any new colours in the universe for you to discover through the random mixing of poster paint.. 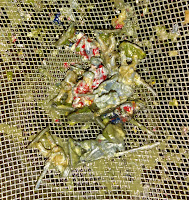 I strained the mixture through a sieve and they do seem to have been sneezed out of the nose of the Great Green Arkleseizure. I then attended to them one at a time. I should probably have used gloves but I couldn't get a grip on the figures properly. I tried holding them with clamps or tweezers, but that didn't work either. In the end I scrubbed them under running water and I've still got most of my skin left.

The paint came off really easily on most of the figures. Some of those which were a combination of car undercoat, premium varnish and lots of under cuts still have a few remaining scraps that won't come off, but that won't be a problem.

The annoying side effect was that there were a few figures in the batch that I'd had to repair after their first painting. Mr Irregular does sometimes make figures with thin ankles and a few had come off their bases. These are usually easily fixable with superglue. Well, this stuff dealt with the superglue too. And it may have dissolved some Miliput or similar I was using as a base supplement. It certainly did for the polyfilla.

So a success, I would say, with some more figures back into the lead mountain.