After the initial trials everything seems to have come off the bases just fine. Even the stuff on the Peter Pig plastic bases, which I can probably recycle, unlike the mdf ones that turned to mush. Some figures had ankle failure, but they've recovered with a bit of superglue. 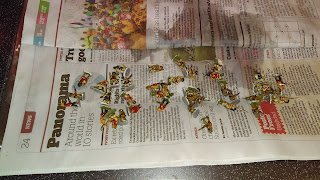 The rebasing has gone pretty well. I haven't had too many shortfalls/spares on the figure front, except I knew that I'd have a couple of battalions of British left over. The Sikh regiments aren't a problem as they'll be repainted as Ever Victorious Army, and the spare Imps needs to be repainted as a single unit.

The next order of business then is to strip the paint off the spares. A brief tour of the internet revealed several suggestions. Phil recommended Dettol, but we didn't have any in the house. One favourite on the GW fan forum was Coke and I had a few cans lying around. To go with the rum we brought back from Cuba, you understand. 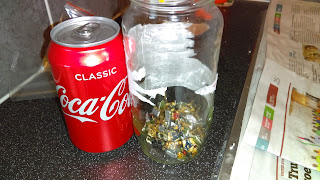 So I decided to pop the figures in a jar... 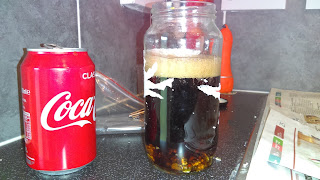 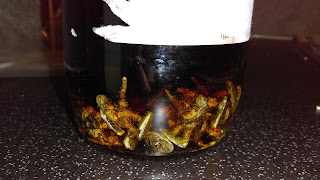 Eventually it settled down, so I put a lid on the jar and left the figures to it. You can see them in the murky depths, hopefully getting all bright and clean.

Post Script: The overnight situation isn't brilliant. Little evidence of the paint coming loose, so I'll leave them in for another day. It's not urgent I start work on them anyway. It might be, of course, that using Ronseal varnish on them is protecting the paint quite effectively.