I may have done something stupid. Yes, I know it is hard to believe, but I might just have.

You will recall recently that I rebased all of my Opium Wars/Taiping Rebellion figures, putting them on nifty 30mm x 15mm bases, at 3 figures each. That increased my number of Chinese units and gave me some spare Europeans that are in the process of being bulked out to make Ever Victorious Army units and the such like. I reckon I can use my spare Sikhs as the EVA wore turbans. Okay, so I have to make sure you can't tell they've got beards as Malaysians & Filipinos are not notable hirsute, but they'll do.

So whilst I was thinking about adding these I thought to myself why not go the whole way and do the French forces from 1859/60 as well?. They only took a couple of infantry brigades and a cavalry squadron, so a nice compact little army that did fight an action or two on their own.

So what I needed were some early Second Empire troops in summer uniforms, if possible. Luckily the changes to the French Uniform from 1850-1870 are minimal, and I was prepared to use figures in normal dress, - I can always paint kepis white and add neck cloths if needs be. Be nice to have some in the French pith helmet or broad brimmed sun hat, however.

I found information on the uniforms worn in China sparse ( I do read/speak French a bit and so I can search Google "pour les uniformes du Deuxieme Empire en Chine") so I resorted to those worn in the Solferino campaign, mostly.

Based on all of that I started to hunt around for suitable figures that weren't Franco-Prussian war if possible.

I then chanced upon the Lancashire Games range of figures, that purports to cover Europe from 1860 -1880. Result! They also do a Crimean War range, but I went for the later figures as there's a change to uniform just after, if memory serves.

The figures were even in a sale. Result!!, with two exclamation marks. They looked okay in the pictures on line, - a bit bulky perhaps, and they'd all got packs, which wasn't ideal. And no Marine figures, but if I thought I could just use some in a simple kepi as Marine Fusiliers wore them and not berets. 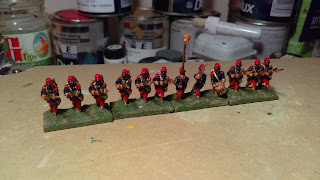 The figures arrived and are, in deed, a bit bulky. The detail is clear, and they painted up well enough. The only fault is that the French trousers/breeches are a bit of an ankle strangler, and that's a weak point in the figure. As you can see I didn't bother with the neck cloths or kepi covers for these.

The problem came when I went to put them in the box. 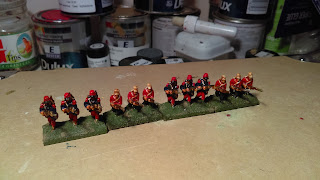 Yeah. Many of you will have seen this coming. Here they are, lined up with some stout fellows from my British forces, made up of figures from Irregular. Flippin' 'eck. That's a 3mm difference at least. You can just about wear that at 25/28mm sizes, but in 15mm it's a massive difference.

This was just careless of me. I suppose I should have done a check. It appears that Lancashire Games are quite well known for being on the large size. I know 15mm figures vary in height by manufacturer, but I've mixed Peter Pig, Essex and Irregular in armies and got away with it. Not so here.

On the positive side, the Frenchies were always deployed in their own brigades, so they will be away from the Brits, and Europeans were taller than Chinese, so perhaps I can live with it.

In the long term I'm inclined to build mainland European 19th century armies, so these will make a base for those forces, which I'll match up against other Lancashire Games figures. In the interim I'll keep an eye out for anyone who makes anything more compatible with my Irregular fellows. I mean I will finish painting these, but there's a chance I may end up transferring them to another front or,

And whilst I'm on the subject, does anyone out there know what the regulations were for the issue of Eagles and battalion colours under the Second Empire?

Damned if I can find them anywhere, even with my awesome French language googling skills.