Our regular weekly game ended up on Tuesday this week. It was Will's birthday, and having celebrated with his family the day before he decided he'd like to do some wargaming on the day itself.  As ever I was more than happy to oblige. 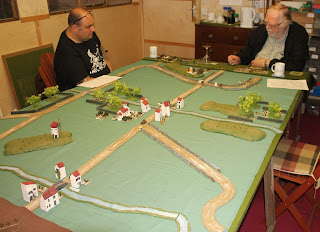 As I'm still refining things for COW I'm afraid Will got SCW again. For this session we were joined by a very occasional visitor (like over 5 years since his last showing), Mr Graham Sargeant. I was expecting also to be joined by Chris K and Phil, so I gave the two early arrivals command of the Fascists.

For a change I did this as an end-to-end game, rather than a cross table as usual. The Nationalists were attacking up the road. The forces consisted of 6 battalions of Italians, with some tankettes and a couple of artillery batteries, accompanied by a couple of Falange banderas and a unit of Civil Guards in trucks together with a unit of Regular Cavalry.

The defenders were mostly Basques with a few workers militia units... 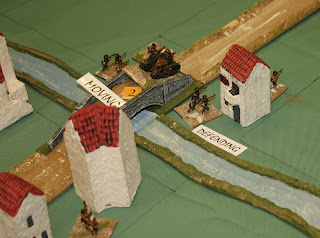 ...and a tank or two. I ran them until my late arrivals showed. Despite the Nationalists having the initiative they lost it early on in turn one, so I pushed one of my Renaults up to beef up the defences in the forward village, where Will seemed to be concentrating his armour attack. 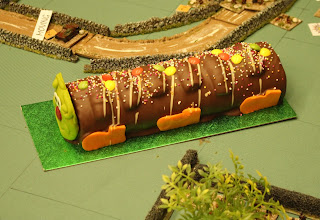 Chris K then turned up, so it was time to break out Clyde the Caterpillar. His offensive powers are weak, but he's fairly effective at delaying an offensive. 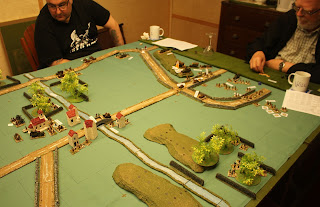 With Clyde mostly disposed of, we went back to the game. I took advantage of an observer in the church tower to call down a howitzer battery on the Italian guns deploying on the crest line to the left of the main road. Sarge sent his trucks down the left hand road at top speed to try and out flank me. 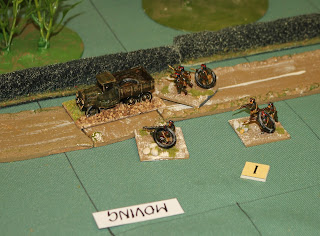 The lead truck unit was shot up quite badly. They've lost a company and every other base has taken damage. This was the first proper use of the anti-vehicle rules where troop carrying is involved and they worked okay, although perhaps Sarge wouldn't agree. 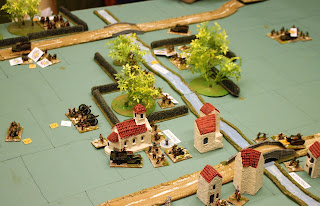 That unit drew the Republican fire quite effectively, allowing the cavalry to ride up and conceal themselves in the olive grove on the table edge. 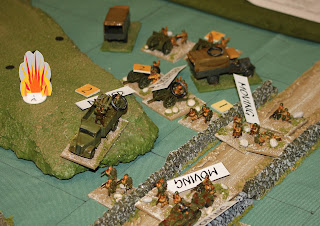 Up on the hill crest the Italian guns were having a rough time, and were effectively blasted off the hill and into retreat.  The AA truck unit luckily survived unscathed. 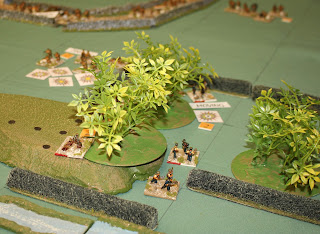 On the Republican right the Italians started to close on the militias hiding in the olive grove. Fire was exchanged. 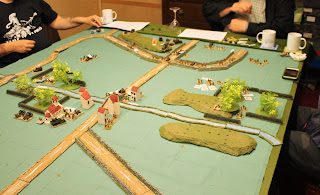 The Italian advance had otherwise stalled on the line of the sunken road (marked by the dry stone walling) that ran across the line of their advance. 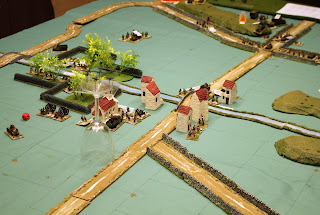 At this point both sides got an airstrike. The Nationalist flew in first, and failed to spot and bomb their target, which was the church. 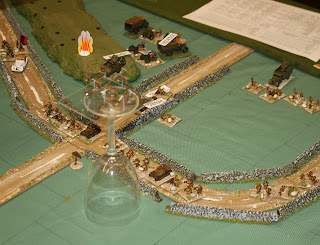 The Republicans likewise failed to acquire and bomb the units on the cross roads. Yeah. Rule re-write coming up. 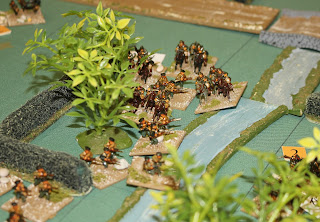 Luckily taking the initiative the Regular Army cavalry charged the Basques in the left hand olive grove in the flank. In a tight fought combat the Basques were evicted and thrown back a square. 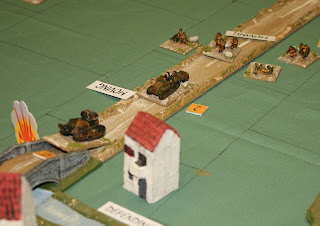 Inspired by the cavalry Will charged his CV35 flamethrower tank up the road. Chris K was heard to remark "I thought it was a Panzer 1", oblivious to the fuel tender behind it. The Renault and the tankette exchanged fire, all to no effect.

Due to the fact the four of us (yes, Phil had joined us by this point, and Clyde suffered a further butchering) hadn't met up for a while the game wasn't a fast paced as usual. Eating birthday cake also takes up time too. So, after 2-3 hours play we hadn't reached a conclusion, but the game was nicely poised. The Nationalists were having a more difficult time than normal, and their prospects of prospering on this front were diminished.

I considered leaving the game up for next week, but on reflection I decided that if I was to play the scenario further I would reset it and restart from the beginning with a few changes both to set up and the rules.

As I'm only a couple of weeks away from COW I need to get my scenario for that workshop sorted. The game needs to occupy 4-6 people for about 3 1/2 hours, explaining the rules and also the design philosophy, such as it is. Much as the end to end type game has a lot going for it, I think I'll stick with a cross table game as more stuff gets into more action quicker.

Right, now I need to go and finish that Italian AA truck with the 20mm Breda on the back.