My Khmers now have some opponents. These are Thai/Siamese, (DBA IV/40) using Irregular Miniatures figures from the same range as those I used for the Khmers over on this posting.

I regret that this is a "minimal research" army, unlike the Khmers*, meaning I used the army list and the catalogue listing to put it together, plus a bit of internet "research".

I finished these a week or so back, but I've been off for a week catching some sunshine on a last minute break on a Greek Island. Today was a lovely sunny day so I took advantage of it to get them photographed under natural light. 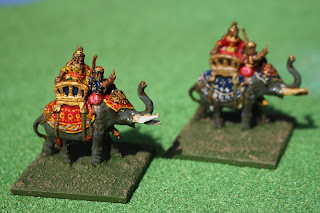 This is the Elephant General and an Elephant element (Irregular Miniatures V53). I used the same model for both and as it is a one piece casting decided not to do any conversion work on either of them. The main difference is a lot of gold on the General figure, nearest the camera. 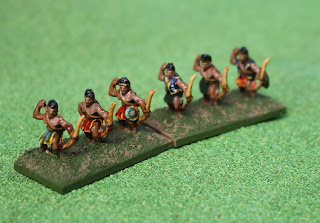 Next we have two elements of Archers "3Bw". These are Irregular Miniatures V48. The figure has a lot of variations in pose, costume and equipment, so they make a good light unit. Most of them are posed drawing an arrow in the selection I got, which is a nice dynamic position. These figures also pop up in the Khmer army. 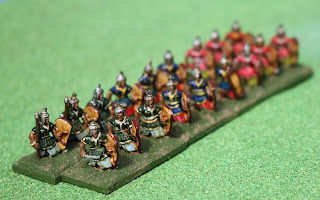 The bulk of the army is made up of "Warriors" or "Levies" or "Soldiers", which are respectively "3Wb", "3Ax" or "3Bd". All of them are on the same sized base with the same number of figures, so they're fairly interchangeable. The figure is Irregular Miniatures V55, which also appeared in the Khmer army. It has a few variations. Some have spears, some have swords and the shields are at different angles. I've painted them in pairs so I can distinguish between them if I want to mix the troop types. I probably should have got some lighter armed figures for the levies on reflection, but these look just fine.

Here they are from the other side, so you can see the shield variations. 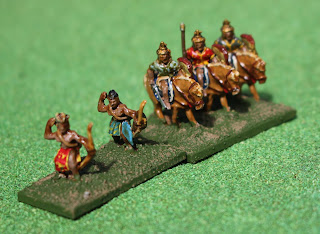 Lastly we have a unit of Psiloi (same figure as for the Archers above) together with some cavalry. The cavalry are Irregular Miniatures V54. Again there are variations in the figures. The one in the middle with the spear/lance  stands out quite well. Mostly the costume is the same as the main infantry units.

Here they are, all arrayed ready for action. A good colourful mix if figures.

I probably need to make some jungley terrain pieces to go with them, but then they're good to go.

* 'Cos, like, I bought an ACTUAL book about them.