Previously, on Wargaming for Grownups...

I had cunningly ordered three armies (Khmer, Thai/Siamese and Burmese) at the same time to provide opponents for each other and to save on postage. The genius part of this was to order only three crossbowmen for a unit that required four, so I had to submit a follow up order to Irregular of some bits and pieces to justify the extra figure.

The excellent Mr Kay responded promptly to my need for an extra crossbowman, so I was able to finalise the third part of my South East Asian trilogy over the weekend. This one is DBA III 9b Burmese 1044-1525AD.

This meant I had to leave the last unit until the figure arrived to ensure they all had the same paint job.

I've been annoyed with the depth of field in recent pictures, so I got the camera manual out and had a look. I've set it to Aperture Preferred and set it to F29. This means a longer exposure with camera shake an issue. Luckily I have a small table top tripod, and using this with the timer solved the camera shake problem. To bring out the colours I've used forced flash as well. 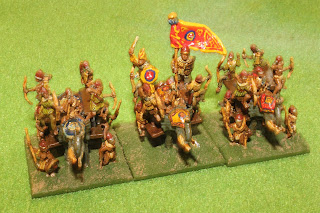 The Burmese Army is top heavy in elephants. In fact, the elephants are top heavy as well. When I mentioned I was going to do this one Phil remarked "Oh, that's the one with the double-decker elephants". As I hadn't researched the army at all at that point this all came as a bit of a surprise. The elephants also have escorts. The army list say "large crew or escorts". Well, I thought I'd go for both. 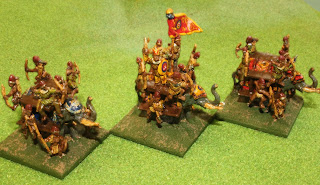 The central elephant is the General, of which more later. 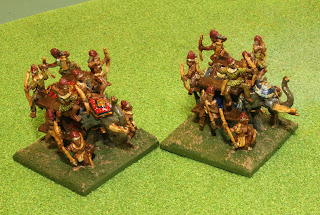 The battle line elephants are Irregular Miniatures V57, with V58 as escorts. They're quite a cluttered model, and there's a lot going on in the poses. They are a bit fiddly to paint, as I decided to stick all the crew on before I applied the brush to them. 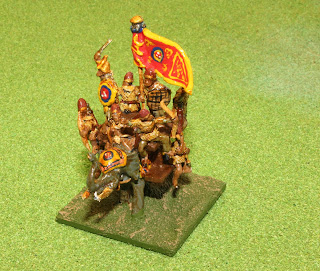 Irregular don't do a Burmese Command elephant. I could have used one from another range with a howdah, but instead I decided to stick with the double-decker. To make it commander-y I added V63 & V64 (Burmese Infantry Officer and Standard Bearer respectively), and hid the bases with Miliput. The army list has the option of putting your general on a "Dragon Horse" and having a Cavalry (CV) unit instead. Yeah. Right. I took the elephant.

I have to say at this point that I had issues with colours and designs again, so this is all made up or based upon best guesses. 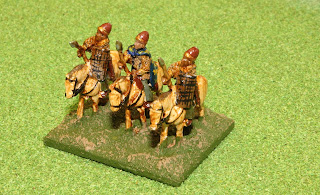 The army does have a Cavalry (Cv) unit. These are Irregular Miniatures V59, which come in a mix of styles. I think  the Burmese used wicker shields, so I've had to paint lines on the shields, with mixed success. 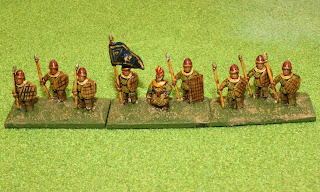 Next up with have 3 "Spears", or, in this list, 3 x 3Ax elements. These are Irregular Miniatures V60, together with one each of V63 & V64 again. The figures have quilted armour (as do a lot of the elephant crews), which I've undercoated in black and dry brushed with a pale green. 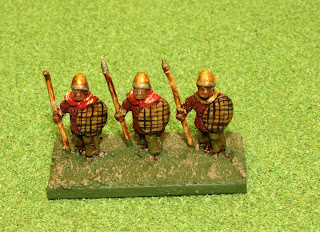 The army has two units of "Guards". These are the "3Bd" element, using the same figures as the Ax elements. As some of the figures come with cloaks I kept them back for the Guards. 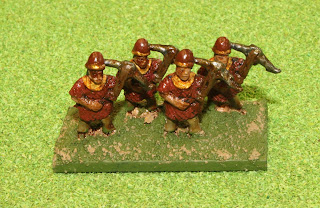 The other Guards are a "4Cb" unit, - those chaps who were a man short and held me all up. These are Irregular Miniatures V62. I would have liked a more active pose with the crossbow, but those can be a bit of a pig to cast, so I understand why Ian has done them like this. Again quilted armour, but this time dry brushed with red leather. 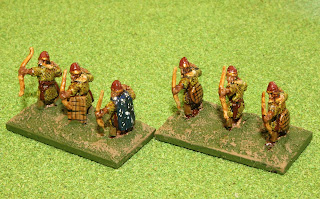 The army has quite a bit of firepower as it has a couple of elements of Archers 3Bw. These are Irregular Miniatures V61 and there are a few variations in the selection so we have a man with a cloak and a few different shield shapes and sizes. 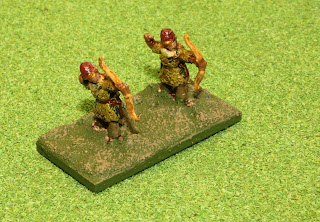 Lastly we have a unit of Psiloi (Ps) Archers, using the same figures as the 3Bw elements. 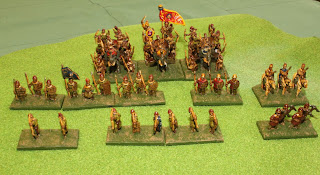 And here they are all assembled.

They're a nice looking army, - well they've got three elephants - with a bit of colour. I shall be intrigued to give them a go. Perhaps in a three cornered round robin solo tournament.


* For those of you who don't get this reference, then you need to watch this: link
Posted by Trebian at 16:33