Another year has passed, so it was off to Knuston Hall in glorious sunny Northamptonshire once more. I spent most of the day discussing the ins and outs of the Battle of Edgcote with one of my normal wargaming friends, Phil, and we are making decent progress. More will be written on this project over the next few months as our production schedule should see it ready for COW in 2018, so I was well ready by the time I got there.

COW starts with a Plenary Game which all attendees take part in. This year's game was "The Most Dangerous Place on Earth" which was about the Berlin Crisis of 1961.

Some Plenary Games are a bit of silly fluff, over in 30 minutes, including briefing and wash-up. Others are more ambitious and involved. This game was one of the latter. There were five teams, I think (West Germans, East Germans, Russians, the UK and the USA), together with individual players representing Charles De Gaulle, Mao Tse-Tung, Willy Brandt and Marilyn Munroe and probably the world news. As far as I could tell every player (and there were about 50) got a named, written briefing. For example I was Bobby Kennedy. It was a mammoth piece of organisation and authorship for a game top last about an hour.

Each team had maps as well, but the main aim was to circulate with other teams whilst trying to reach your own personal objectives (mine were to stop the Third World War, prevent the Cuban missile crisis ever developing and upstage vice-President LBJ). I think I achieved all of them.

I don't have any pictures of the game in progress, - it was really rather hectic. I'm not sure who won, but I think the East Germans lost, having to back down after being very bellicose over Berlin. They may have invaded the French sector for a short while.

All in all a very impressive game.

After the Plenary it was time to break out the After Dinner Games. I was there to present "Northampton 1460", an event eagerly awaited by me and at least two other people, who button holed me for a copy of the game almost the moment I walked through the door. 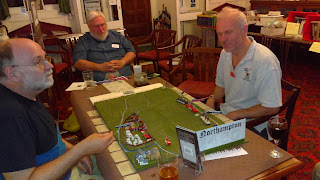 It probably got played half a dozen or so times at least. We had a good range of results, including a high scoring Lancastrian victory, - quite a rare outcome. I didn't even have to play in most of the games, as you can see from the picture.

Overall the feedback was good and positive. That's gratifying as the audience at COW is a well informed selection of wargamers, most of whom design as well as play. Most of them spotted the game's antecedents, which provoked some interesting discussion.

The game got played on and off throughout the weekend, using the game book version as it takes up considerably less space. The changes to the core system that I had to make were well received and one participant took a copy, claiming it would make a good template for El Alamein. Best of luck to him.

I know it was well received and popular as I finally got to bed at 2am.

Which wasn't ideal, as I was due to run a large SCW game at 9am the following day.