Having warmed up with "Northampton 1460" the previous evening my big show of the weekend was the full Saturday morning double session for my Spanish Civil War game "If you (still) tolerate this" that regular readers will know has dominated the last 6 months in Shedquarters. On receiving the COW programme I realised that the session was a bit of a dinosaur. Not only am I using revised rules from 5 years a go, but it's the only full-fat table top 15mm figure game with serious amounts of metal on the table. Except, perhaps, for Ian Drury's Pony Wars game. Had I missed the Conference's Zeitgeist this year? It was a relief to see the sign-up sheet full, so thanks to Rich, Alan, Tony, (Republicans) Alex, Mathew and Andrew (Nationalists).

Having staggered off to bed at 2am I set the alarm for 6:30am to give me a fighting chance of getting everything set up before breakfast.

On the positive side I was down in the Practical Room, which is just off the main car park, so I could back the car pretty much all the way up to the door to unload.

I hadn't written a full scenario but I had a good idea in my head of how I wanted it to go, using the "Three Bridges" layout I tried a couple of times in the last year, including at one of my whole day wargaming days. Tony threw in a curve ball the previous evening, saying he'd only be able to make the second half, so I sketched in a reinforcement role in my head. Then Alex said he could only make the first half, so what the hell, I decided to play it by ear mostly.

Luckily both Will & Phil from the Shedquarters Regulars turned up as technical advisors and to fill in for the missing. Many thanks to both of them. It was really appreciated, as I'm reluctant to ask them to get involved as they have usually suffered enough for my art in the months leading up to COW.

The set up turned out to be not too difficult, with my sub-conscious really doing the business as I laid the terrain out. 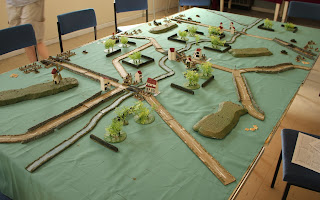 In this fictional encounter I went for a broad mix of troops on both sides. The Nationalists (top left above, on the right below) had a small Italian Division, complete with tankettes, field guns and an AA truck. They were helped out by two mixed brigades of Regular Army each with a Falange Bandera attached, and some guns and at the far end some Condor Legion Panzer 1s. 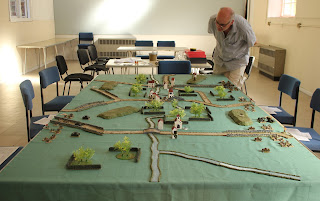 The Republicans had a couple of weak Basque brigades, holding two of the river crossings, and an International brigade with some T26s arriving to help take the third.

I also placed a motorised column of Communist Militias off table, for Tony to use when he arrived. I kept the arrival point open to allow me to balance up the game after the initial Nationalist successes. 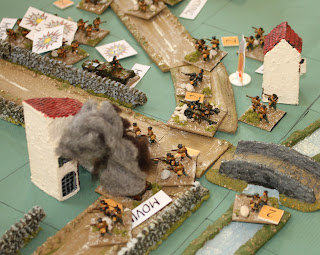 The Italians under Mathew really went for it, and rushed the village with all they had. This was a high risk strategy and it didn't really work. Caught in the open the infantry got badly shot up, and the leading tankette squadron broke into the village losing its infantry support. The plucky Basques had it at them with grenades and whatever else came to hand, inflicting numerous casualties and leaving the squadron going up in smoke. 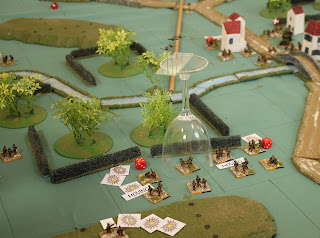 Just when it looked like it couldn't get any worse for the Nationalists a flight of Ratas turned up, managed to avoid their own troops, and shot up a fair few Fascists. The rules worked okay, which was a massive relief. 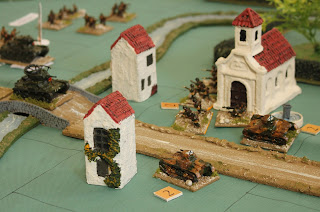 Over on the Republican right Alan had put one of his T-26s on the bridge. Mostly because he could, I think. This was the only bridge/town not occupied at the start of the game, and Andrew had got in there in force, with Panzers, so this was a fairly ballsy move. 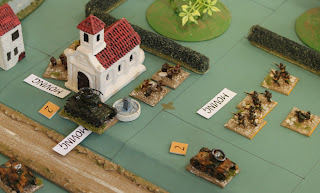 However, supported by IB infantry he was able to take control of the Cathedral area, driving the Fascists back. The Germans may reconsider the efficacy of having their armour equipped with HMGs when coming up against AFVs with a decent sized gun. 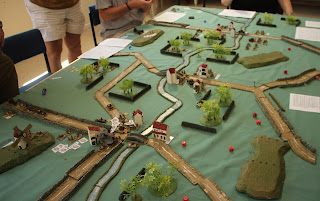 In the centre Alex seems to have come unstuck. I have few pictures of this action, but he seems to have been reduced to a single unit of Falange skulking in an olive grove (for those of you not familiar with my terrain conventions, in Spain dry stone walls denote a sunken road and hedges the boundaries of olive groves). Or perhaps he had ignored the central village, and sent his regular infantry off to support Andrew on the left. 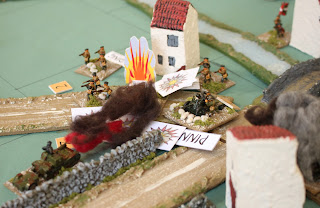 Mathew had had enough of this Basque impudence and brought up his flamethrower tank to sort them out. 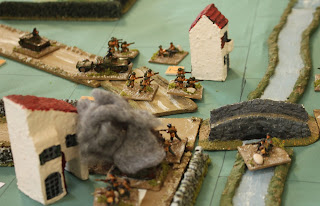 This softened them up sufficiently for him to launch a successful combined infantry/armour assault on the village. 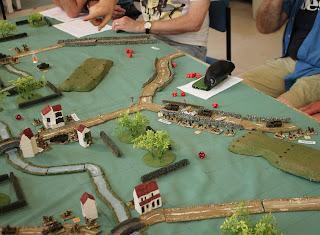 We had a quick break for tea/coffee/home made biscuits enabling Alex to sneak out and be replaced by Will. Phil was taking an increasingly active role as Soviet advisor to the Republic, and Tony now turned up with his workers' militia in trucks, lead by a brave commander in a commandeered white staff car. What could possibly go wrong? 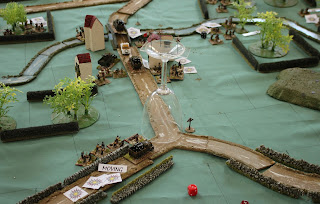 Well, next turn one of the Nationalists' Fiat squadrons turned up, and despite losing a plane to AA fire they succeeded in shooting up the column, including the white car, killing its occupant. It could have been worse. Mrs Tony was there and kindly chose the Fiats. It could have been a whole flight of He111s. (On a side point here there was another air attack by the Republicans at some point, where they shot down one of their own aircraft. So that was interesting.) 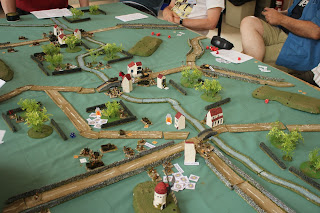 This is the last picture of the game. The Nationalists are mostly going backwards, although they are still clutching at straws in the centre.

Everyone pronounced themselves happy with the game and, except for Alex stuck, it for the whole double session. I got quite a few "drop ins" who sat and watched for a while. I was pleased with how it went, although having just re-introduced it I again forgot the "retire under fire" rule.

I reckon I've got this game about where I want it. Until I invest in one of those table tops with layers of foam over metal base with magnetised strips to make sunken roads more authentic looking I'm happy with the look of it all. The actual simulation looks good too. The combined arms attacks work well, but you need some luck and it all can become unstuck. The attack/counter attack mechanism in street fighting is quite exciting too.

So I think that can all go back in the box for a year or so.

Now off for a well deserved lunch and a pint of the excellent Phipps IPA that Knuston has introduced to the bar.