Having spent the morning running my own session in a converted stable block, it was time to go and sample other people's hard work.

My first after lunch session was John Bassett's "Fall Edelweiss". John is better known for his semi-role playing games set either in the ancient world or in the dark corners of the modern day. As someone who has been involved in an Eastern Front campaign on and off for about 30 years, mostly as the Russians, I as intrigued to see John's take on this, the Caucasus campaign of 1942. 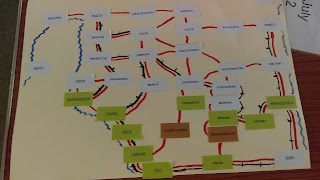 John's aim was to have a game that focused on logistics and intelligence, so the game board and the units were all slightly stylised. As the Germans we entered from the top of the map, with the aim of taking Maikop, Grozny & Baku and also severing the pipeline on the Caspian Sea (right hand side of the map as you look at it).

White areas are open ground, green are hills and brown are mountains. Attacking into the latter two reduces the number of regular divisions you can use, but allows any number of mountain troops. I was von Kleist, so I had loads of armour and not a lot of the mountain chaps. Units were represented by oblongs of coloured card, with the unit description and key details on one side. Placed face down, and with the introduction of blanks they provided a solid hidden movement system without too much fuss. 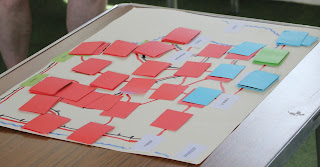 The Soviets deployed first. The face down blue units on top of the reds are our Recce. JB simply picked up the stacks we were recce'ing and gave a vague description of what was there. We could then decide where to advance, and where to allocate resources. Of course you could just charge straight in, but if you do you have to spend the log first, and you only get half back if there's nothing there to fight. I did it one or twice when I was sure I knew that the Russians had fallen back into a square, so I would have something to fight. The combat mechanism was simple, - you could roll as many dice as you spent log points, and you could increase them for the schwerpunkt units, tripling or doubling them which burnt through log, but really frightened the Ruskis. 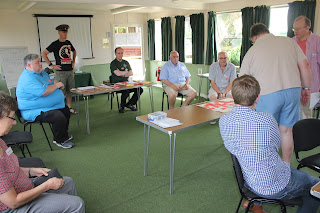 That's the Russian HQ staff at the far end... 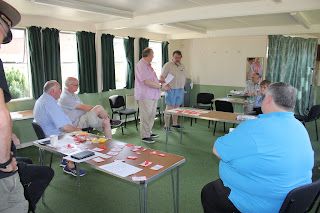 ... and this shows more of the Germans at the other end. 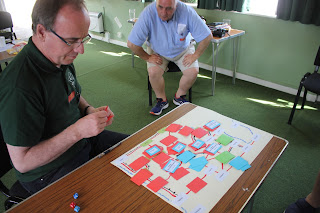 Here's Russian Mike pondering really carefully where to place. He's about to descend into a very dark place in the face of the overwhelming power of German armour. As someone who has played Russians on this front A LOT it is easy to be bedazzled by the Germans. You just have to remember that's there's an awful lot of the Soviet Union and only a finite amount of Germans. The trick with the Germans is to appear larger than you are and make the Soviets feel inferior. 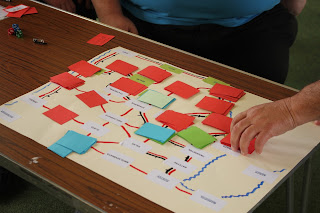 Ignoring orders to veer to the left I have punched straight through the middle, and even taken on Russian forces in Cherkessk,  a hilly area. The intention here was to find a big stack of Russians and destroy them to put them on the back foot and frit the living daylights out of them. It succeeded really well, which was lucky as I'd had to spare some of my infantry to help the Roumanians take Armavir as a preliminary to the assault on Maikop. 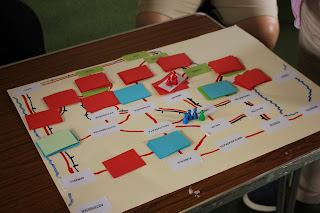 Next turn I left a covering force in Cherkessk (actually all dummies) and drove to the coast. I was sure that the Soviets were in sufficient awe of our military prowess not to counterattack, as proved to be the case.

So, although we didn't capture everything we meant to we had a pretty good run, so I'm claiming a victory.

It was an interesting game, and my write up doesn't do justice to the simple elegance of the recce and log systems. They were the key to victory and once we'd got ourselves sorted out we did okay. In retrospect there were things that as a team we could have tightened up, buy nothing major. My only issue with the game was that the board needed to be bigger with clearer locations. I went the wrong way in one turn as the roads (or lack of them) were obscured by the scruffy layout of the Soviet unit cards.

After a tea break with cake it was time for the second session; Martin Rapier running Phil Sabin's Kartenspiel. 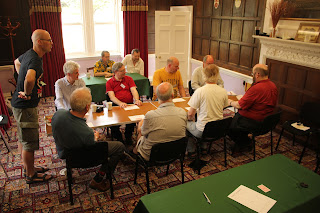 Kartenspiel is a simple card based resource management game simulating early 19th century warfare. Each side has 5 players, being an army commander and four corps commanders. The army commander has half a pack of standard playing cards. Plain cards are infantry, court cards cavalry. These are allocated to corps commanders and once given can't be got back. As the game is won by beating a corp (ie removing all its cards in combat), you need to keep some in reserve to prevent the breakthrough becoming a rout. 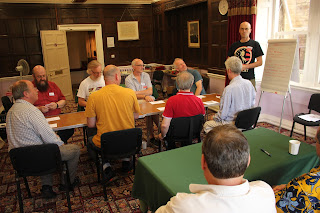 Players decide each turn whether they are attacking or defending,what they are using and if their cavalry are charging. They indicate the decision to attack or defend through a simplified version of rock, paper, scissors without the scissors, same with whether the cavalry is charging or not.

We had a brilliant plan (it was mine, as I was army commander). We would refuse the left and hit them with a strong right wing. Mainly the right was run by John Salt (in red with the beard) as after an initial rebuff I put Alan sitting next to him on the defensive.

We nearly had the game won, and had pulled in all their reserves when our left wing corps commander gave the wrong order and attacked. Caught in the open field by a stronger opponent he was overwhelmed and destroyed. Luckily I had some cavalry in reserve against our breakthrough which covered our retreat. By this time Jerry, leading the other army, admitted he had no reserves so if we hadn't screwed it up we'd have been through with a complete win the following turn.

After the first game I dropped out to have a look about. Kartenspiel is a fun game that takes no more than 30 minutes and I can see it being a lot of fun at a club Christmas evening.

Popping into the Lounge I had a quick glimpse at Ian Drury's Pony Wars game "Hurrah Boys, We've Got Them!" 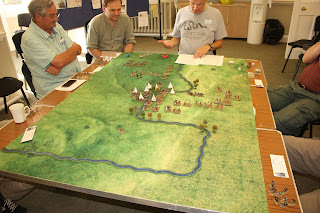 I clearly had come in at a tense moment as the US Cavalry were preparing to mount up and charge the Redskins, having given them a volley with their car-beens. 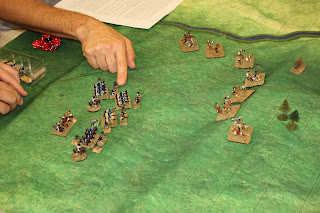 Nice looking terrain, with a slightly more subtle grid marked on it than I use for my SCW game. 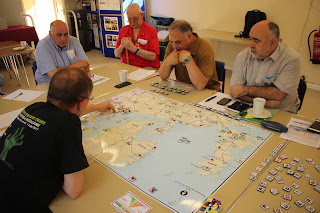 Elsewhere Tom was running an epic matrix game called "Baltic Challenge". I was intending to play this in the evening, but it got shifted to the afternoon after I'd signed up to Kartenspiel. It looked really interesting, being an analysis of issues that might arise in the Baltic states today between Russia and the USA as well as the locals. 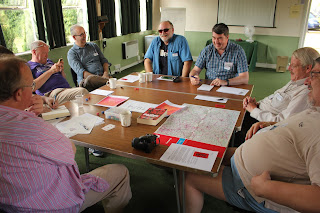 Across the lawn John B was running another matrix game, this time based on the Baader-Meinhof gang. This was another game I would have liked to have played in, but John ran it back-to-back with "Fall Edelweiss", so I thought it was only fair to give him a break from me.

It was then time to go for dinner, to discuss our day's achievements.

The evening's main entertainment for me was a WW1 trench raid RPG run by Tom, in the style he has successfully used for WW2 commando raids, secret agents and weird stuff and spaceships.

The game starts with roles being allocated. I ducked out of being the leader this time, nestling in to a part half way down the hierarchy as a Corporal 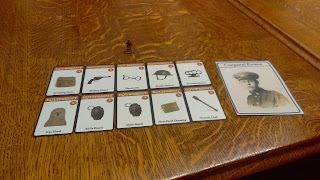 You then have to share the kit out and make sure you have everything you need for the mission. It is important to co-ordinate between players to make sure all the important kit gets taken. As you can see I had the handcuffs for our prisoner. 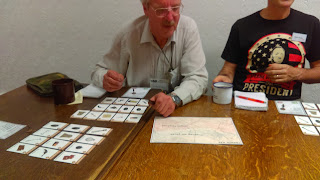 The leader then gives us a briefing about how to perform the mission that Tom has given us. 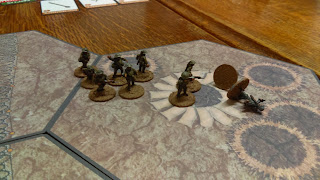 For this game Tom had made some really nice big hexes for us to navigate our way across. On this one we've just found a Jerry listening post and done for the chaps manning it. We're now just about to crawl down the access tunnel to the main trench.

After this it all went a bit pear shaped and we never did find out what the Germans were up to, although we did capture a prisoner. The Lieutenant got wounded, as did a couple of other chaps, and the Sergeant got killed. Not a rousing success, but Tom was very kind to us in saying we'd done jolly well.

Then most of us died a week later when the Germans unleashed their new fiendish gas distribution method.

After this there was some time for a few more games of "Northampton 1460" before I headed off to bed.