Up at a reasonable time for an excellent cooked breakfast, Knuston style. My only criticism is the paucity of brown sauce supplies. A bottle of the old HP on the table would be a real improvement.

My morning's entertainment was "Rattenkrieg", Andrew Rolph's game of the siege of Stalingrad, based on Mike Elliott's Easter Rising game of last year. Andrew has been a supporter of my games since attending COW last year, so I was keen to see what he had been up to. 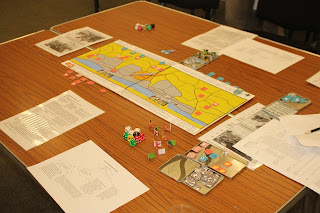 Andrew introduced it as a two player game, but in true COW style we played it with three players aside. And very convivial it turned out to be. There's nothing like discussing your secret strategy ideas in front of the opposition (this is not a criticism of the game, which was very enjoyable) 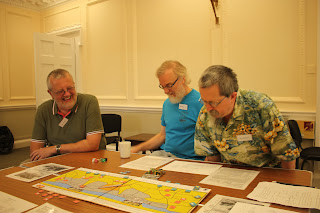 I got to be the Soviet Northern Front commander in this one. That's the Germans getting themselves sorted out in the picture above. The zonal movement system was very simple, and the areas were colour coded as to whether they were open or city spaces. 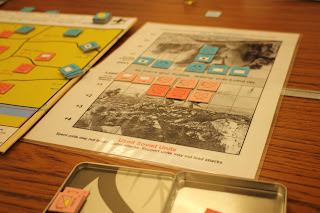 The combat system took the playing pieces off the board into a tactical display where a form of DBA combat resolution system was used. Defences, such as rubble, are placed in the row between the two armies, which deploy from the centre outwards. Rubble, by the way, is caused by shelling areas of the City, and also reduces movement. 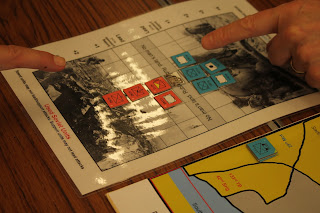 Lots of opportunities for pointing. 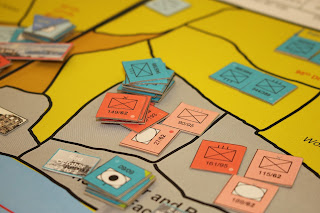 This illustrates my low point as a commander. Having withdrawn into the grey city spaces I failed to cover that knife shaped open space, pointing directly into the Red October and Barricades space. The Germans slipped round behind me and occupied one of the areas leading to the bridges. I managed to seal the area off so it caused no more problems, and was able to recover it when the units were withdrawn to form an army reserve.

It was a very tense game and featured a hard fought engagement in the Grain Elevator, so it was doing something right.

In summary an excellent session for an excellent game. With a few tweaks as discussed at the time it would make an interesting commercial product. Not bad at all for Andrew's first COW session.

After this it was time for a smashing roast Sunday lunch and a few more games of "Northampton 1460" before the WD AGM and time to take our leavings. Until next year.