One project I am committed to over the next 12 months is to do with another local battlefield. Edgcote, fought in July  1469 as part of the "Robin of Redesdale" rebellion, is just inside the boundaries of Northamptonshire and so falls within the remit of the Northamptonshire Battlefields Society.

In recent years we have focused mainly on the 1460 battle in the grounds of Delapre Abbey but we have always recognised that we owe a duty of care towards less well known battlefields. Edgcote suffers from being one of those battles that is only not well known, but there are also doubts about exactly where it is. The evidence allows us to place it within a 2 1/2 mile square area between Chipping Warden, Culworth and Thorpe Mandeville with a fair amount of certainty. 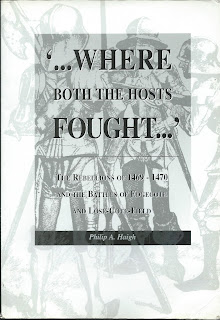 The one dedicated book on the subject "Where both the hosts fought" by Phillip Haigh argues for it being fought at the northern end of the square, across the River Cherwell and Trafford Bridge. My go-to book on most British battles, Richard Brooks' "Cassell's Battlefields of Britain & Ireland" has it towards the south. Both set ups are on the Battlefield Trust website's map of the battle.

Haigh's book is good because he reprints most of the available sources as an appendix, so you can make up your own minds. I'm leaning towards Brooks' interpretation because the sources don't mention fighting over a bridge or stream, which is the case with Haigh's analysis.

Haigh, of course, has got form as his "Military History of the Wars of the Roses" repeats the traditional error in respect of the positioning of Northampton.

I'm also more inclined to accept Brooks' numbers against both Haigh and the Battlefields Trust. Another problem with his conclusions is that he hasn't tried to fit the number of men involved on the real estate available. If you try to draw them to scale on the map he suggests they just don't fit. His best estimate is that the armies are about 20,000 strong. Assuming a depth of 8 men per unit at two foot per man (and that's tight) the frontage ends  up being just shy of a mile. That's a lot of ground space. If you go for a shallower formation - which is more likely - of 4 men at a more generous frontage of a yard per man then that's over 2 3/4 miles. For reference the blocks on the maps on the Battlefield Trust's website are about 1,000 yards. The Trust reckons on 5-6,000 men, which fits with their version of Haigh's layout. If you go for the more likely position, then the numbers have to be down to 2-3,000 to fit, which is closer to Brooks' interpretation.

The area itself is under threat from the HS2 project. Depending on which interpretation you take the line either goes through the battlefield (Haigh), or mucks up the view from it and the possible approach marches (Brooks), although an old disused rail line does this a bit already.

As part of our work on the battlefield the Society is going to build a battlefield model/game. We've been supplied with a fair number of figures by Wargames Foundry from the original Perry range, back in the day. These are now 28mm, although I'm sure when I acquired some they were 25mm. Hey-ho.

Phil & I are working on this together, and we're kicking a few ideas around, as I mentioned on one of my COW blogs. Phil has been thinking about this for a while, and he has a view that the gap in our show armoury is the lack of a 28mm classic modern style wargame, using big figures and Warlord Games type rules. Whilst this isn't my normal stomping ground what he says makes a lot of sense. There are people who won't give the time of day to a table with 15mm figures on it, let alone a game that uses wooden blocks with flags stuck on matchsticks.

Which is why I've spent some of today painting some 28mm figures, and thinking about "Hail Caesar".. 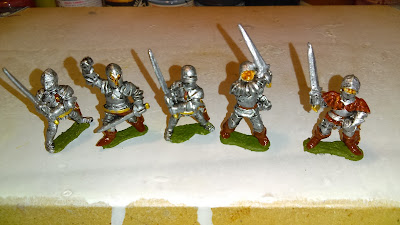 Here are 5 men at arms. I went for them as being mostly in armour, they are the easiest to paint. Thin black undercoats and a silver dry brush, and mostly that's it. The non-armour items have been blocked and then covered with tinted varnish. The challenge here will be for the painting styles for the figures to match. Either that or we glue them close together, with Phil's nicely painted chaps round the outside.

Any thoughts out there?