So last Wednesday, on the anniversary of the Battle of Edgcote in 1469, Mrs T and I joined an evening battlefield walk around the site. What could be nicer than a pleasant evening's stroll in the summer sunshine around the south Northamptonshire countryside?

We made our way to the Griffin Inn in Chipping Warden (how English does that sound?) and had a lovely pub meal before setting out with the group on the walk. There were just over a dozen of us, I should think, including the Fairport Convention road manager, on his way to set up for the Cropredy Festival.

Between us we had several people who had a view on how and where the battle was fought, - me, Phil, Mike Ingram (the chair of Northamptonshire Battlefields Society) and the leader of Harrington's Companye, who organised the trip.

As we set out it started to cloud over, and the wind picked up. We were devoid of any late afternoon sunshine, alas, but we set off down the Culworth Road anyway, clutching umbrellas as amulets against a rainstorm. To follow this post you might now find it useful to pull up the map from the Battlefield Trust website. Chipping Warden is top left, where the big pink "P" can be seen.

Going down the Culworth Road enables you to see the rather fine ridge and furrow on the fields to the left: 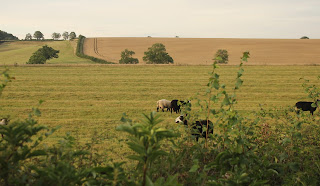 The ridge line in the distance isn't one of the candidates for the "three hills" that traditionally denote the site of the battle. As you go along this road you turn to the right towards Trafford Bridge.

Trafford Bridge crosses the River Cherwell, and for some is the focal point of the battle: 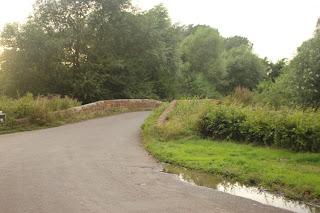 The bridge isn't contemporary with the battle, added to which the landscaping in the 18th century altered the line of the river and put in a weir and a lake. That means that  any conclusions drawn from walking this area have to be taken with a pinch of salt.

From here you can look north to get a good view of Jobs Hill. It is where Drunken Meadow Spinney is marked on the map: 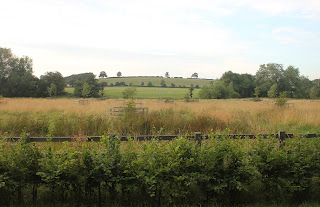 This is a good, prominent rise, with the river at its base, so you can see why it is an attractive choice for one of the three hills.

Across Trafford Bridge the road bears round to the right before a sharp left hand turn. This is where the sign board commemorating the battle is located: 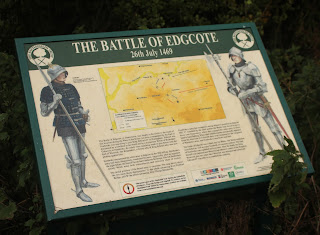 It's great to have a board commemorating a battle that is a bit obscure and whose location is open to debate, making it even more bizarre that there isn't one for Northampton. Personally I'm of the view that it is in the wrong place, but it has to be on publicly accessible land, so options are limited.

Just up a short path from the sign board you can look out towards where the big red block on the map is located. 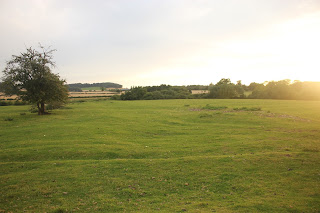 In this picture you have Trafford Bridge Farm in the centre, I think, and so Edgcote hill to the left. We had a discussion about whether this is Danes Moor or not. In fact it's actually a bit further to the left: 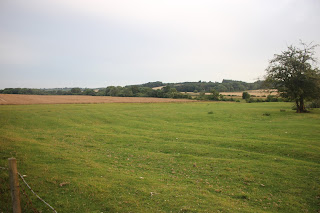 If my reading of this is right Danes Moor is the other side of the tree line just the other side of the wheat field. By now I was fairly convinced we had not made the best use of our time and this wasn't the best spot to evaluate the terrain. It was also getting really cold, so Mrs T and I headed back to the pub and our car.

It was, in conclusion, a frustrating visit. We'd walked round the outside of the battlefield area and never really got in amongst the terrain. It's all very well to look at where the battle was, but I'd prefer to get on the terrain where the armies actually were.

I think we really needed to walk from Chipping Warden down the "Jurassic Way" to Edgcote, and then up the lane to Trafford Bridge Farm. From here you need to pick up the footpath through the farm up to Edgecote Lodge Farm, along the base of Edgcote hill. You then need to walk along to Old Spinney to look across Danes Moor and then to the right for the "alternative" location.

I really need to go back, probably with a smaller party (2 or 3 maximum), and a thorough understanding of the original sources. We had one of those discussions where people say things like "I think it is in Warkworth's chronicle", but without it to hand it was difficult to take the discussion any further forward.

However, my understanding of the battle has moved forwards quite a bit, which is positive, but only in as much I'm sure where we walked wasn't where it was fought.
Posted by Trebian at 12:06

Email ThisBlogThis!Share to TwitterShare to FacebookShare to Pinterest
Labels: Battlefields Trust, Edgcote, Wars of the Roses