For the first time in quite a while the Monday Night Group met on a Monday night. We also had a good turnout, with Phil, Will & Chris K joining me in Shedquarters for a game of Basic Impetus with my Reconquista armies.

We're at an odd point in the year for me. My wargaming year works towards producing something interesting for COW. Sometimes I have several ideas on the go before one emerges as the project for the year. This year it was the Spanish Civil War. Having thrashed that to death over the last six months it is time to think about what next. There's a good prospect of  return to China, but the issues with the Lancashire Games figures have put that project back on hold. They are unusable with my existing 15mm armies, and I'm not in the mood to shell out on replacements for the moment. 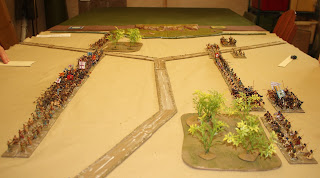 So for this evening it was out with some of my Hat plastics. My relationship with Basic Impetus is a bit on-off. I want to like BI a lot. I do like some of it, but some of it is just infuriating. The question for me is whether as a group we can compromise on playing the version as published, or whether surgery will take place. In any event there's a long term aim of using them for the Parataikene Battle Day next year, but in the interim there's an opportunity to use them where Phil & I think they work the best, - with hard charging knights.

For a change I ran through the BI set up process from the start. Chris is to the left with the Christians, Will to the right with the Andalusians. 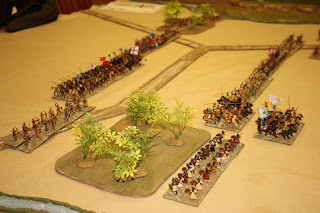 Both sides thought it would be good to close the distance, so of they set towards each other. It was obvious that the end of the line nearest the camera would be the decisive point, with the Spanish cavalry massed for a breakthrough charge. 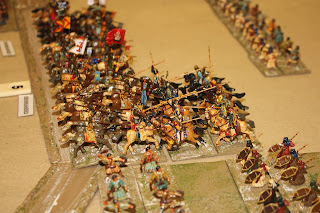 As it was due to some naive movement and poor luck on the initiative roll Chris took some archery damage, before Will was able to engage the Caballeros Villanos with some of his heavier cavalry. They were a well matched pair of opponents. 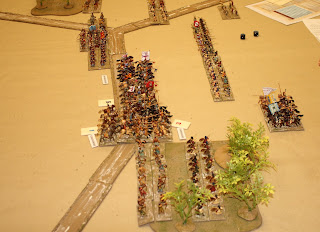 Will won the initial combat, and drove Chris back. However he was unable to capitalise in the next round of fighting, and the melee stalled. Meanwhile in the wood Will's Light Infantry was trying to clear out Chris' skirmishers. By this time Phil has arrived, and he's at the other end, doing something with light cavalry. 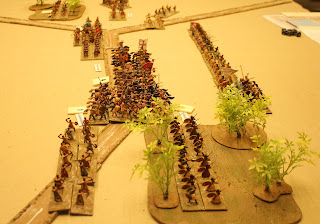 Chris is cleared from the wood, without taking casualties. He is being unlucky with the initiative rolls, as it enables the archers to get another round of shooting at his knights. 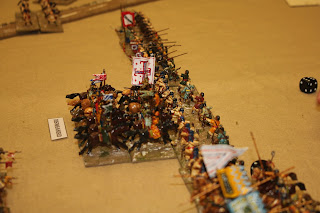 Finally the knights are off the leash. One unit, out of shot, joins in with the existing combat and breaks the Andalusan cavalry. In the middle those units of archers look like they're for it. 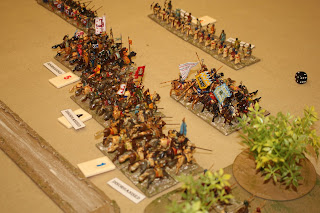 Crazily Chris' unit beats the archers and they fall back, but his cavalry pursuit move falls short of them, so he misses out on the second round of combat that would have probably done for both of them. I'm all for random pursuit, but infantry out running knights....I don't think so. 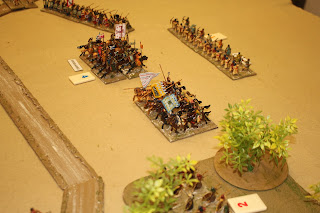 Will's cunning in holding back some cavalry to keep them fresh pays off, as he wins the initiative roll again, and is able to pick off Chris' central unit of knights, and break the Villanos as well. Christian army through the break point (due to some other losses at the opposite end of the table) and it is game over.

A slightly frustrating game where the luck didn't run for the Christian army, and one initial error due to lack of familiarity with the rules really made them pay.

So I'm still in a quandary with BI, although it passed the evening pleasantly enough, and does give a quick, clear, outcome. It'll be back, but in what form it is difficult to say.
Posted by Trebian at 11:53