Biting off more than you can Manchu.

So I know this blog is usually about figure games, but I do play other stuff as well. On my last holiday I met a chap who lives near us who used to play old SPI games and wanted to get back into it. We have been meeting monthly for a while now and he, Gary, has turned up in a few posts. This month it was my turn to host, and I couldn't resist trying out a game I've had on the shelf for a few years.

When I premiered "Taiping Era" at COW several years ago it just so happened that the Strategy & Tactics issue with Rich Berg's game "Manchu" was on the bring and buy. Some one else had picked it up, but based on my offering passed it on to me. 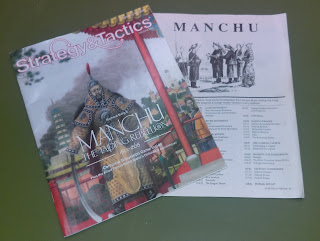 This was published in S&T post SPI, when it was run by World Wide Wargamers, and dates from 1988. Berg has designed some ambitious boardgames (including Campaign for North Africa), but this one is remarkable for a number of reasons both in scope and design concepts.

For example, it has no ZOCs, and the CRT, such as it is, is rather bizarre, using 2D6 in a tens and units fashion. It also has a serious random events table (the "Interesting Times Table or ITT*") and open ended game turns. 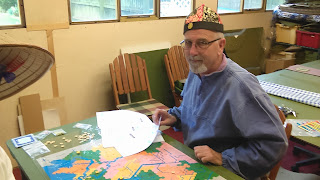 We started about 10:30am. Gary played the Imperial Chinese government, and so got to wear the mandarin cap. I'm therefore the Taiping rebels. You can just see the edge of my conical hat on the left. 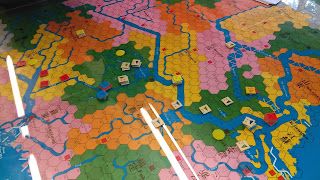 It's a really colourful game, with each province being a different colour. There's some glare on the picture as I put a sheet of perspex over the map to keep it flat. The Pings start in bottom corner of the map (to the left of the picture, - I'm the four red counters in the yellow province). Peking is in the green province top right. The big blue river across the middle is the Yang-Tse. Shanghai is in the bottom right corner. I therefore start a long way from the centres of civilization. We're several moves in at this point, and neither of us has a game based strategy. I resolved to try and follow the Taiping Strategy as far as possible, and my initial aim was to move east and set up in Nanking. Gary wasn't sure, and just generally tried fire fighting where ever I popped up.

Another different mechanism is that the Imp player has three levels of involvement, as he gets increasingly concerned about the growth of the rebel movement.  So at the start of the game there's only limited things he can do, and the Pings literally have the initiative. As the Rebellion grows he finally wakes up and gets more chance of having the initiative in the game turn, and can deploy more troops. 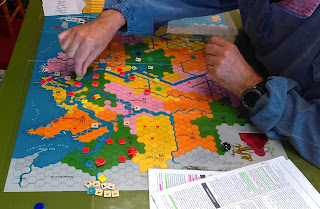 The Ping player has to balance his advance with triggering the might of the Empire too soon. One of his key decisions is when and where to set up the Capital of his Heavenly Kingdom. Historically this was Nanking, and this was my intention. There are two other locations you can use, one also on the Yang-Tse and then Peking. Gary tried to nail down the Yang-Tse locations, but I got past him and attacked Peking. This was possible because the key to the game is movement by water. If you can get your chaps on junks you can move quicker and you don't suffer attrition for multiple moves in a year. I was able to assemble a massive fleet of junks, embark most of my army, sail past the Imp outposts, and attack Peking.

This contained the Emperor, but a lot of the defenders were Mongolian cavalry, - less use in a siege, so I captured the Capital, and did for the last of the Ch'ins.

I did not know it then, but that was pretty much as good as it got. The game has an initiative system that determines who goes first each year. If you win you get two free actions. Otherwise you have to roll on the "Turn Continuation Table". This may let you perform your announced action, pass the turn to your opponent or end your turn immediately. What that can mean is that a run of bad luck can paralyse your forces. In the three or four turns leading up to the attack on Peking I lost the initiative each time (Imps went first on a 5,6. Never been so cross at rolling high numbers), and then rolled turn end when it came over to me. That meant I wasn't recruiting or causing havoc anywhere else. So although establishing my Capital was a brilliant coup and I subsequently got a decent share of initiatives by that point the ground I needed to make up elsewhere on the map was too great. I also made the error of defending my controlled provinces too thinly on occasion. The Taiping units are twice or four times as strong in terms of fighting ability than most Imps for the same manpower steps. That means a single Ping step can hold off decent sized Imp forces both in the fields and also under siege. However the combat system inflicts hits as a percentage of the stack involved, so even if you win with a one step counter, inflict 75% casualties on your enemy the minimum 5% hits you take will end up being your entire force if it only has one manpower step. 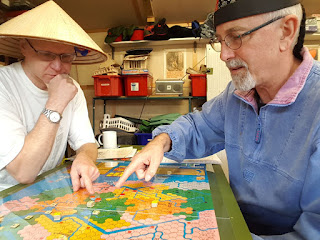 By the end of the game we were both impressed by the level of thought you had to put into each move and the options you have to consider. After over 6 hours of play I was unable to control enough of China to declare the Heavenly Kingdom complete, and the Imperial forces were unable to suppress the rebellion. China was sunk into long term turmoil with no prospect of an end. The game was a  draw.**

We both really enjoyed the game. It is very different, and although there are games with more rules, this one has a lot of odd nooks and crannies. It is so intricate as well that some options don't always work. For example after I had seized Peking and made it my Capital we got "Foreign Intervention" on the ITT. The common outcome for this roll is that the French & English forces capture Peking. The game expects this to happen when the Imps control it, so the consequences of the capture are good for the Pings. But what if the Pings control it? And so in the end we ignored the outcome. The only other problem with the game was that the counter mix isn't big enough. You can end up with a lot of scattered units, so the low value counters are at a premium. It's all very well to suggest you can make more of your own, but that's not likely to happen part way through a game. If anyone out there has an unpunched counter sheet I'd appreciate a scan of it.

I benefited from having a historical knowledge of the period and the Rebellion, but it wasn't enough. If Gary had been more clued up he'd have realised the significance of the Ever Victorious Army in  Shanghai, instead of dismissing it because it could only move a few hexes from the city. He'd have also cottoned on earlier to the importance of the British occupying Canton.

Given the advantages I had before we started it's probably fair to say that Gary probably would have won if we'd used a handicap system.

I really liked this game. It's a challenge to both players, and the history is pretty good too. It isn't perfect, but it is a really good attempt to capture what it was all about.

Anyway, next time we meet we'll be back to something more conventional, with Panzer Group Guderian.