August 29, 2017
See what I did there? I set up a refight of the battle of Crimisus on the bank holiday, so I could use a post tile that looks like Christmas Bank Holiday. Yes? No? Oh well, please yourself.

Any how, plucked from the pages of "Lost Battles" again here is a big refight using AMW as has been done on previous Bank Holidays.

The Battle on the River Crimisus took place in in either 341 or 339 BC. It happened during the Carthaginian campaign to take control of the Greek colony of Syracuse on the island of Sicily. A large invasion force was lead by a pair of Generals called Hasdrubal and Hamilar (the Punic leadership was terribly lacking in imagination when choosing names). The Greeks/Syracusans were commanded by the Greek General Timoleon of Corinth.  History would indicate that Timoleon was a general of talent, something that couldn't be said of the Punic Pair.

Whilst we have some reasonable sources for the battle we don't really know where it was fought, so the terrain is speculative and taken from Sabin's book. There was high ground looking down to the River Crimisus, but the plain was cut by minor waterways running down to the river. The accounts indicate that Timoleon's army was heavily outnumbered, and he advanced to take on he invaders against the advice of others. He caught the Carthaginian army as it was crossing the River Crimisus and did okay until the enemy brought up more and more forces. He was then saved by a thunderstorm that blew in from behind him. The rain hammered into the faces of the Carthaginians, giving the Greeks an advantage as their opponents floundered in the mud, blinded by the downpour.

To capture all of this I introduced a few special rules:

I also gave Timoleon's army an advantage in quality as well, being Elite/Average, the Carthaginians Average/Levy.

For figures I used a mix of Greeks, Roman Allies, Carthaginians from 2nd Punic War, and Assyrians.

For this game Phil got to be Timoleon. Chris A & I got to play the Cathaginians, although Chris joined us late on, having been held up in traffic. 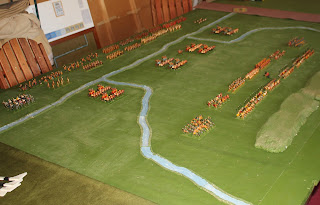 Here is the set up, with Timoleon to the right. Those chariots always look good. 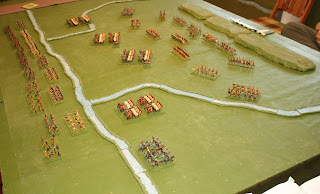 Phil immediately started by moving his troops wider to stop being outflanked. I rolled a "1" and got some cavalry across the river. 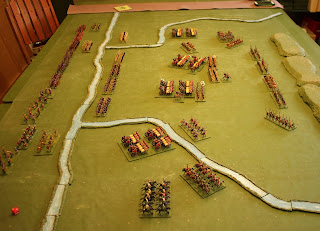 I pushed the chariots up to keep Phil away from the river line to allow me to get my army across. 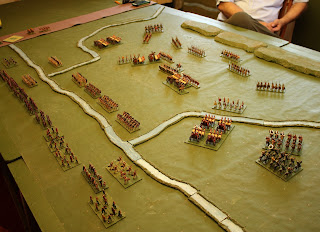 The chariots look great but they have very big flanks, so my central left hand unit got well taken in the side by some peltasts. The cavalry on the right started to get stuck in. As you can see I got a lot more units over the river this turn. Those infantry are my good stuff, - the Carthaginian "Sacred Bands" and their Libyan supports, - i.e. Punic citizens, mostly, not scruffy mercenaries. 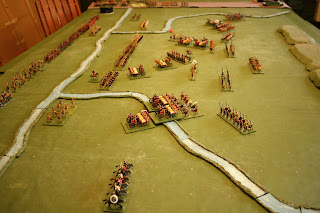 Having seen off the Greek Cavalry near the camera I thought I could pin Phil on the watercourse with my chariots, whilst bringing the cavalry round the flank. In the centre my chariots were getting a hiding, but they had done their job of covering my river crossing. 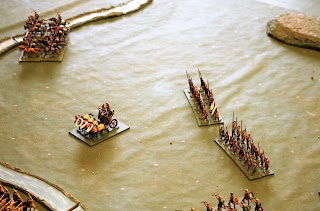 Over on my left I lost my last chariot unit, and Phil was able to push his cavalry wide. 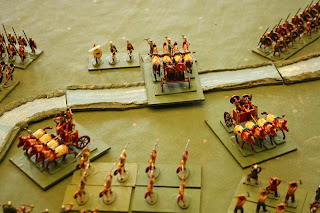 At the other end of the table I was losing the fight across the river. However, I'd got lots of reserves coming up, including some Gallic Warbands. What could possibly go wrong? 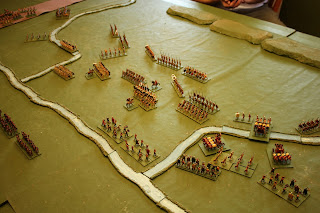 My centre was a bit of a mess, with Timoleon's elite mercenaries carving their way through my Sacred Bands. Phil's second line of hoplites was also closing up to add some weight to the centre. 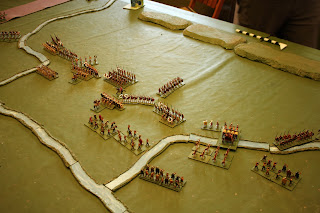 I pushed up my second line as well. Everyone was engaged all the way along the line, but taking a lot of casualties. The second lines were going to be crucial. 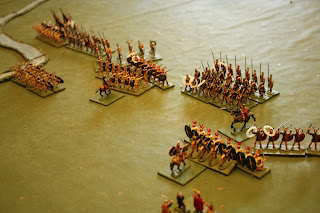 The Generals were also closely involved in the action 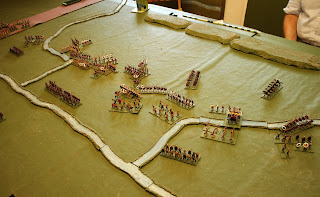 Typically for AMW when fights get down to one or two bases the combats can go on for a long time. The chariot on the river line, for example, just sat there, unable to kill or be killed. I'd pushed out a warband to my right, but they hit a unit of hoplites, and were coming off worse. I think by this point we'd introduced the bad weather rule. 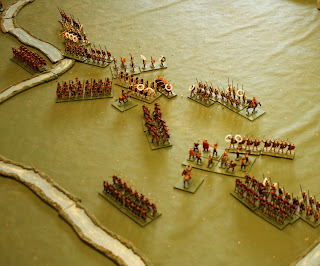 The Carthaginian first line was now virtually destroyed, meaning the death of the flower of Punic Manhood. The gaps being opened up were being filled by my second line. 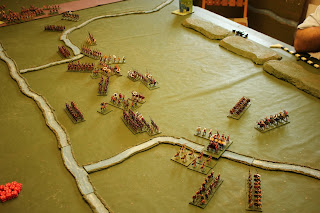 I'd lost a lot of units by now, although not enough to break my army. However, it was time to fire up the BBQ, so I called it a win for Timoleon, and left Phil & Chris in Shedquarters to chew the fat... 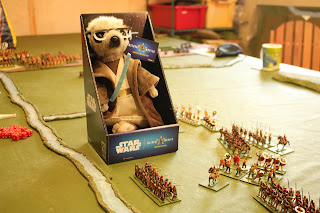 ...but I clearly shouldn't have left my camera behind.
AMW Crimisus Lost Battles wargaming