Down in the West Country Again (1)

Is it that time of the year again? Why, yes it is. Off to Richard Lockwood's for a day of wargaming fun.

We correspond before these days to work out who is going to put on what, and we usually try to have something new to share. Richard has been talking up "Dux Bellorum" from Dan Mersey, published by Opsrey. He has been using it for Greeks & Persians, but we agreed to use it for what it was intended on this occasion.

I wanted to try them but had low expectations. I've been underwhelmed by the Osprey rules that I have had a chance to read, but Richard was keen on them. 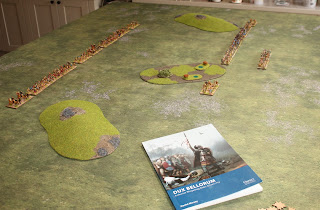 Richard set up some Saxons (me) and Irish (Chris A). He threw some terrain on the table, including a marsh in the middle, which proved to be decisive. 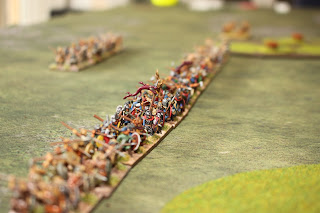 Gratuitous eye candy shot of the Saxons. The rules focus on troop types (warriors/shieldwall etc) and leadership, through the allocation of leadership points. 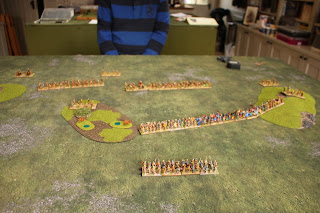 The Warrior Irish can fight in the swamp without hindrance, unlike the Shieldwall Saxons. I therefore had to wriggle past the marsh, whilst holding back some of my force as a flank guard. On reflection I should have just sat on my baseline, banging my spears on my shields, but that would have been dull. I put skirmishers in the marsh as a delaying tactic, and also on the right of my shieldwall. 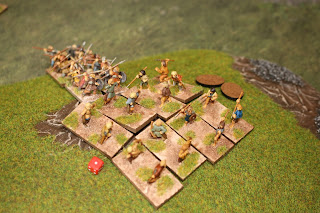 Our skirmishers clashed on the hill on my right, but I would eventually prevail by running in some heavier troops to help out. This gave me a shieldwall unit out on the flank to roll up Chris's line as soon as an opportunity arose. Chris was having problems motivating his chariots, which are out of shot, so he was having issues with his flanking manoeuvres. 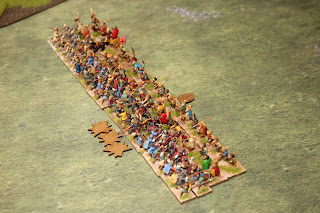 The battle lines collided. The stars represent leadership points. You can use them to add extra combat dice or cancel hits. 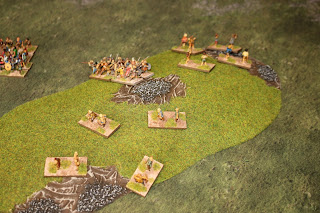 The skirmishers all fled. My spare shieldwall unit was now available to intervene in the centre. Instead it decided to sit on the hill for at least 3 turns, despite me spending leadership points on them. Rubbish. 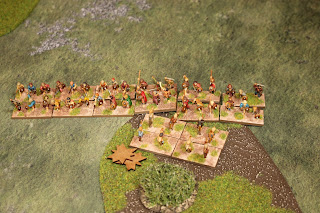 In the marsh Chris caught my skirmishers. I put in some Leadership Points to cancel some hits... 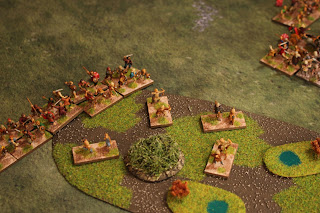 ...alas to no avail. Chris rolled devastating attack dice and I was swept away. 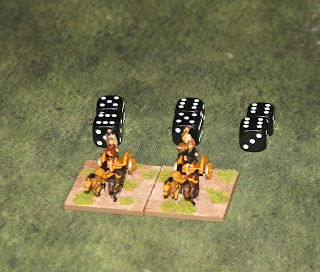 Like BP you need to roll low to activate. These are the first three activation rolls by Chris' Irish Chariots. Not good for him. 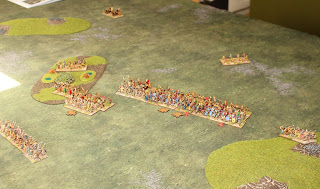 My flank guards on both ends of the line were being recalcitrant, and I only got one unit up to hold off the Irish emerging from the swamp. The unit on the hill just sat there. 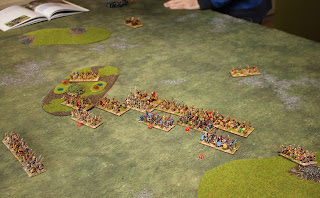 The combat in the middle ebbed and flowed, and had a nice feel to it. 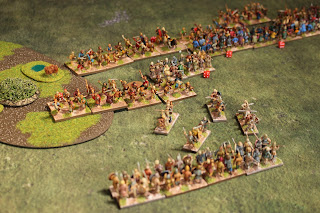 The Irish prevailed over my first line flank guard. I had a unit or two left, but loss of units reduces your leadership points, which started to cause problems for me. 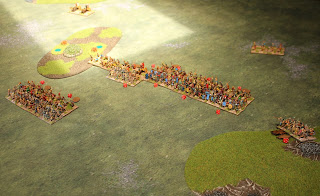 Chris charged my rear units, and finally motivated his chariots. In the centre a lot of units - mostly mine - are down to one cohesion point. The unit on the hill still sits there, having been shot by some Irish slingers. 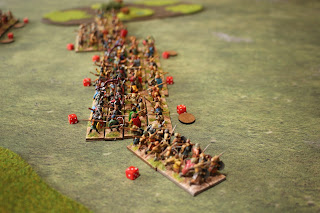 At last the hill sitters get involved. It is almost certainly too late. Too many of my units are down to 1 cohesion pip, and as Chris now has more Leadership points, and crucially, I have to put mine down first, he can now shore up where he has problems better than me. 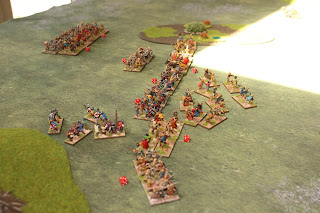 What this means is that despite getting in the extra unit on the end of the line, - but not a flank charge - it isn't enough to save my nobles, who are broken. Chris loses a couple of units in the centre, which is good news, but he is winning at the back of the table. 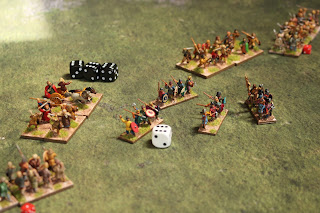 Then it goes really badly, on one end of the line, and Chris out sixes me 3:1. My other noble unit breaks. 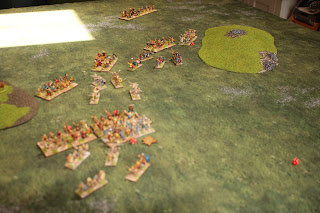 The judicious use of Leadership Points keeps his warriors in the game, and another shieldwall breaks. Game over, comprehensive Irish win.

Thoughts? Well, I really loved it. Good period feel, good simple mechanisms that work, well written rules (would be nice to have a playsheet). Everything clear and well explained. Well done, Dan Mersey. Shame I don't have any suitable armies. Yet.