After I cleared away our final treat was Chris' 10mm Zulu War figures. Chris doesn't just have the figures, he has a rather good book on the subject. His intention was for us to do this with "Science v Pluck" but as he was short of time he resorted to "Black Powder" (hence my practice game the day before). 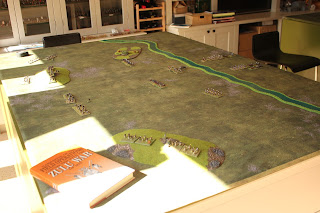 The game was based on the crossing of Myer's Drift by one of the British columns (this is like the Ntombi game in the original BP). I had the Zulus, Richard had the British. Some of my pictures are a bit washed out as by this time the sun had actually come out and was streaming through the windows. 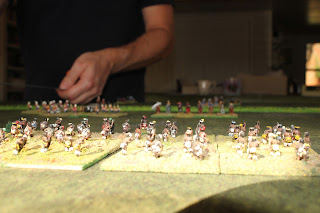 Here we see my massed warriors advancing towards the invaders. 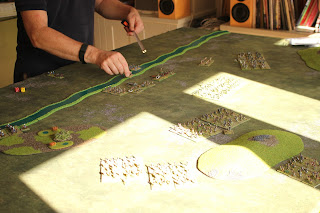 As Richard tried to deploy his forces my Impis closed in on him. My initial rush had driven back his cavalry screen. The cavalry had failed to buy enough time to allow the infantry to deploy, and had retired to save their own skins. 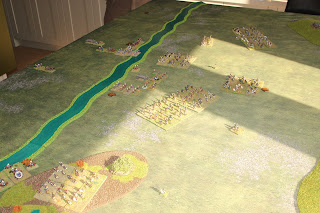 I did catch one cavalry unit, which retired across the drift. Richard had started to open up with his Gatling Gun and some rifle fire, inflicting a bit of disruption. My desultory musket fire was strangely effective. At this stage Disorder is useful to inflict as it stops the British deploying into a more useful formation than, say, march column. 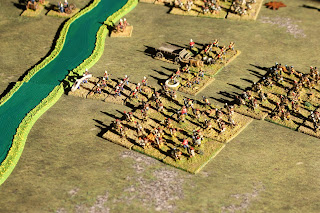 I crashed headlong into the hapless British in column. Due to a "Useful Rule" they were able to hold on despite taking more casualties as they had an automatic "12" for their Break Test roll*. 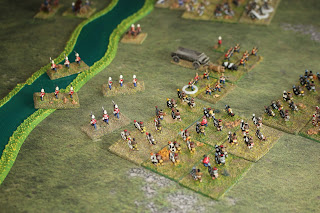 It availed them naught as in the next turn I beat them again and they rolled low on the Break Test. They turned and fled across the Drift. In the centre some lucky shooting inflicted Disorder on my advancing unit, stopping them in their tracks. 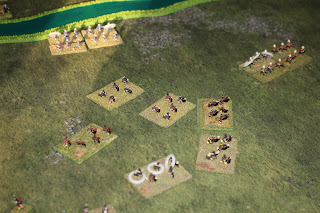 On the other flank the prowess of the British in hand to hand fighting when in a firing line against an on rushing horde broke my chaps.

By this time we were thinking about dinner and a whole load of rather silly things had happened so we shut up shop. I've referred to the "Zulu" supplement, which makes minimal rule changes especially when compared to "LAOK" and really is nothing other than some glossily illustrated battle reports. It has nothing that would fix the issues we encountered. Like the WSS game everything is okay as long as things are going okay.

Yes, we can adapt the rules and fix the problems ourselves but I'd expect more bearing in mind what you are paying.

But I'm not grumpy. We had an excellent day's gaming with good food and company, and resolved to do it again in 3 months time.

Although probably not with Black Powder.

* I may have misunderstood how this works, but this was a scenario where the rules have got it wrong. I charged a unit in march column with Zulus. I roll 6 dice in combat, the British roll 1. We both save on 4+. If I hit with all of my dice and he misses with all of his and all of his saves I inflict 6 hits. As he is Stubborn he counts as rolling 12 on two dice for the break test. My modifier for excess hits  is -3, so his score is 9. Break Test passed comfortably as he needs 7 or more. This means an Impi charging a British unit in March column can't even make it retire, let alone break it. Even if it is caught completely by surprise from the rear it cannot be broken or forced off its ground. Even if it is disordered before the charge it can't be broken or forced to retire. Only if it has been previously shot up can it even have a chance of being broken or getting a negative outcome. Even an Imperial Impi can't force a retire result or break them as they only roll 7 dice. There is no "Useful Rule" that makes it possible either, they just let you re-roll misses, and what you need is more dice. This looks like the game hasn't been properly tested, - either that or they think this is the right answer. Even in the second round of combat the odds on breaking the British aren't good. This means the British player can be careless and get away with it. That shouldn't be the case.