Down in the West Country Again Again.

After lunch it was my turn. Richard L had never had the chance to play with my 6mm WW1 figures, so they seemed a good choice. Plus they're really easy to transport.

As I wanted something to fill an afternoon at most I recycled my Marchais-en-Brie Op14 scenario, which I had previously played with Richard Brooks. The map is slightly tweaked from that game, and there was a minor change to the orbats and deployments. Richard B had sent me a rules update since then as well, so a chance to give them a go. 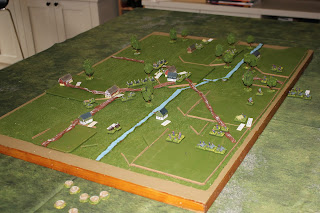 The French (Chris) are to the right, trying to turn the right flank of von Bulow's 2nd Army. The Germans (Richard) are trying to hold on to Montmirail in the centre of the table. I was also using some re-cut hill tiles as I hadn't liked the look of the last lot. 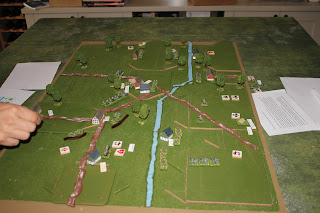 Chris pressed aggressively on his left, as needed, whilst Richard dug in some more. Richard's Uhlan screen slowed Chris down by forcing him to deploy, but was steadily driven back. 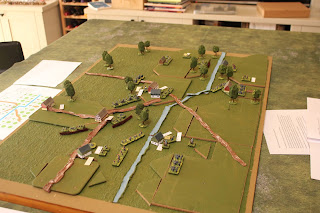 The French developed their attack quickly, and also pressed on the river line at the top of the picture. Artillery up to this point had not been decisive. 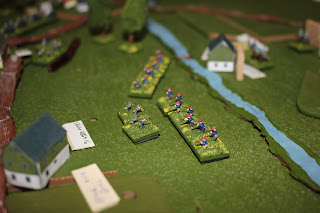 Richard's Uhlans couldn't hold on to the village in the face of the French with their bayonets, attacking a l'outrance. 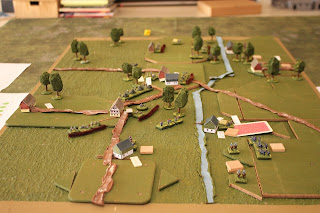 Chris pressed heavily but luck wasn't going his way. He nearly broke through at the village in the centre, but the losses sustained in the assault meant the attack forces were exhausted. That's why the playing card is under the HQ unit. 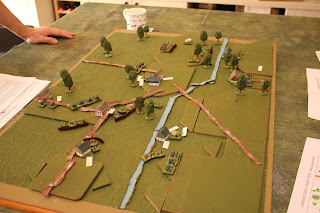 When night fell the French cavalry had managed to get round the German rear and occupy the village on the board edge (you can pick up the sky blue chasseur uniforms if you look). The Germans had redeployed their field guns onto the ridge towiden their field of fire to cover their retirement. The French were established across the Petit Morin River, and were making life difficult for the German defenders.

This was a win for the Germans as the flank remained un-turned and they were able to retire overnight to realign with Kluck's 1st Army. I think they would have had problems extracting the brigade trapped by the river, however, but overall got a slightly better than historic outcome.

Both players were good enough to say they enjoyed the game, and took away the copies of the rules I printed for them. This is a good small scenario that enables players to get a grip of the mechanisms over a short period of time. As the attack starts at 10am and runs to dusk you only have 6 turns, although you can play it with an option to have an extra turn as the actual battle carried on as it got dark in a thunderstorm.