For Phil & me our eventual aim is to produce a game on Edgcote that we can take round the shows and use on the SNorthampton Battlefields Society stand. This one will use 28mm figures as that's a market we don't currently tap in to. If we are going all 28mm then we might as well go "all in" and use a popular set of 28mm rules. So why not start with Warlord's "Hail Caesar" as we've tried "Black Powder" and it wasn't totally terrible.

With the freely downloadable QRS, some notes on their Bosworth game by the Perry twins and an interview with Rick Priestly I thought I had enough to give it a go, relying on BP to fill in the gaps.

As I don't have oodles of 28mm WotR figures to hand, I pressed my Peter Pig figures in to service, and used the Armati scaled down inches measure to get the rules to work with smaller figures. For this trial game I had Chris K, Will & Phil. In practice we pitched Chris against Will, with Phil & me on the side lines shouting encouragement.

When we do it for real we'll probably zone up the terrain, so that there's no need for measuring sticks. 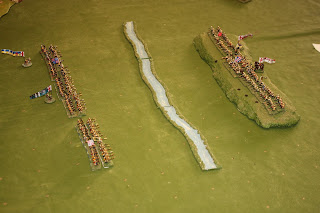 Based on my recent reading we put the Welsh on a hill, with the men from the North just across a small stream. Without having a proper figure/ground scale I improvised three units aside for the main battle lines, with the Welsh having the option of their best troops being mounted if wanted. As they are in the picture. 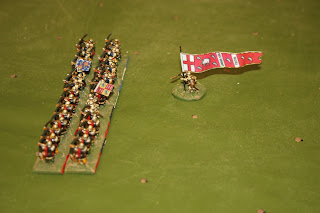 Just off table we have Lord Stafford, with his archers. The Welsh are not provided with any bowmen for this game, following the usual interpretation. 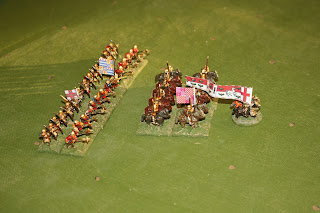 The Northerners reinforcements are some lighter horse, under Sir John Clapham, and some rag-tag infantry from Northampton. 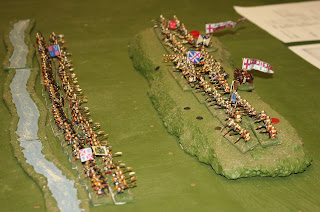 The Northerners started by advancing across the stream and shooting at the Welsh. They were quite effective, with a number of red casualty markers now in evidence. 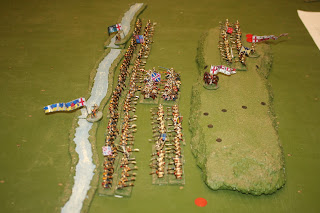 Sore provoked by the hail of shot, Pembroke ordered a general attack. One of his units refused to join in. 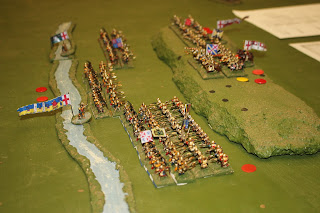 Despite the odds being in their favour the cavalry were bounced, taking slightly more hits than the Northerners. They tried their Break Test re-roll to keep in touch, but got the same number. Tough going, guys. The yellow counter means disordered. 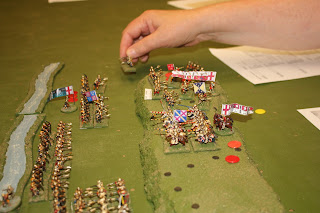 I think I'm missing some pictures here, as it looks like the previously recalcitrant Welsh unit charged down the hill, only to get well and truly duffed up. It retired in disarray to the hill top, pursued by the men of the North. At this point both sides rolled for their reinforcements, and Clapham arrived, his men shouting "a Warwick, a Warwick". I then required each Welsh unit to take a break test, on sighting the new arrivals. 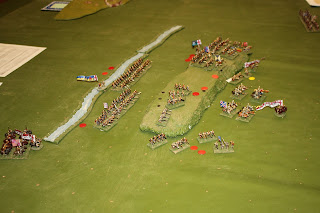 In a stunning array of Break Test failures, the entire Welsh force turned tail and fled.

So, a very historical outcome.

I'm still not a fan of BP & HC, but they got the job done here. We can simplify the system and produce a 30-40 minute game which will look and feel like "Hail Caesar", but will also be unique for our game.

We have some more issues to solve, - one noted feature of the battle was a feat of amazing derring-do by Sir Richard Herbert, where he slew "four score" men. Or was it eight score? I can't remember, but it is a significant amount. We also have to deal with the issue of how Quarter was given in the battle, and how Robin of Redesdale is to meet his end. The game isn't just a game but a tool for us to explain the battle, so it needs to have a good, clear, memorable narrative.

Any how, a positive start. And we're got a few months yet before the 550th anniversary in 2019.