I managed to round off a mini-project for my Taiping Era armies last night.

As I hinted in an earlier blog posting I had some spare figures and was considering using them for the Ever Victorious Army that defended Shanghai during the Taiping Rebellion. The EVA has a romantic air to it, having been founded by a Yankee soldier of fortune, Frederick Townsend Ward, before being taken over after his death eventually by Charles "Chinese" Gordon. This is the same Gordon who would finally meet his end in Khartoum.

I was not initially going to do the EVA as part of the Taiping project as too much fuss is made about them when compared to the overall size of the Rebellion (bit like the International Brigades in Spain) but as I said I had some odds and ends I could use to start them off. Following the annoyance I experienced with the 1860 Lancashire Games French I wrote about in the same blog above I ditched the over-sized devils, and dashed off a quick order to Mr Kay of Irregular to make up the EVA's numbers..

I'm using Sikhs because of the turbans. They aren't perfect. They shouldn't have an beards, and they needed blanket rolls as well. I added the rolls with a bit of Miliput, and got it on most units, when I remembered, and mostly on the correct shoulders too.

The Sikh artillery crew from Irregular weren't ideal, so I bought Mutineer gunners instead.

The EVA at its peak had 6 battalions, some of which had modern (for the period) Enfield rifles. They were supported by decent quantities of guns which usually proved to be decisive in their encounters with the rebels.

I painted the units in their white summer uniforms, which make a nice contrast with their green turbans and multi coloured blanket rolls. The Officer figures I did in blue. These are a mixture of late 19th century Japanese (which I really like) and ACW Unionist Officers (which I don't).

The flags are fairly authentic, although there is some conjecture involved. The flags we know were green with a red border. Ward's flag just had a big black "W" glyph in the middle and was apparently carried by the 4th battalion even in Gordon's time. Gordon had two of the rectangular flags in similar style, but with a red "G" glyph in a yellow wreath in the middle, and their victories in black Chinese characters. He also had a green dragon banner. That got me flags for 4 units, so I just put on the glyphs for 5 & 6 for the last two.

I painted the gun carriages red, as that was the Chinese way of doing things. 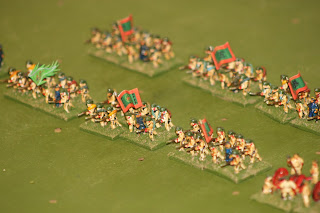 All things considered it isn't a big army, so it'll be interesting to see how they do against the long hairs, probably next Monday. Especially as they usually attack. 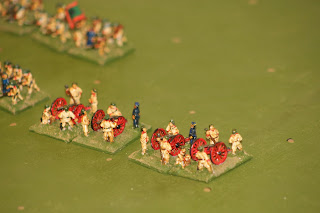 Some of the gun crew are in blue, representing European mercenary officers. 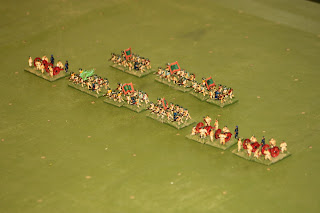 This is them in all their glory. I may have too much artillery for them (my 1860 British only have 5 guns in total), but that's a mistake I often make. 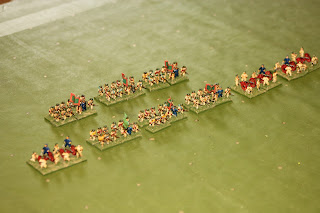 And here they are from the other direction.