Monday Night regular Will has a copy of "Mortem et Gloriam" (or whatever) that he doesn't really get on with.The armies are too big for his existing collection and no one else locally wants to play it. I'm not unsure that this isn't entirely connected with the £60+ entry tag, once you've paid for rule book, special dice and special cards.

Will's been to tutorials and "boot camps" and so on, but he's not going to continue with them. I borrowed his set on the off chance there was something in them that I'd find useful, but a quick perusal didn't really do it for me either. Some of the new ideas in there I've already tried in slightly different formats, so no real need to go with them. Plus we'd need to buy more dice and cards to play them.

So Will is going to take his copy to Britcon and off-load at the Bring and Buy. If you're interested he's selling for £40, and his box includes not just what I mentioned above but a card rack, measuring sticks and other bits and pieces which'll cost £90+ from the store. It includes the currently out of Stock Marker set too.

What this meant was he needed them back, and as I'm not around for our next regular game he popped over to pick them up on Wednesday afternoon. I thought it was only fair to put on a game for him in compensation for all his trouble.

In the absence of any better ideas I grabbed Neil Thomas' "One Hour Wargames" off the shelf and thought we could give that a go. I taped out a 3' x 3'square on the table and got some scenery handy to set up a scenario or two. Previously I've played in a one-off game run by Chris A and done a bit of solo stuff with them, so this was a chance to explore it all a bit wider.

NB You will note in all of the pictures that I used one base per unit, rather than the 3 or 4 the rules suggest. I don't think it made too much difference.

These pictures are a bit small as they're taken on my phone.

First game we did was Scenario 27 "Disordered Defence" where Blue (me, near camera) had to capture and hold the crossroads from a Red force, part on the table, part off. We used Wars of the Roses medievals for this game. Will got a lot of cavalry in his army. 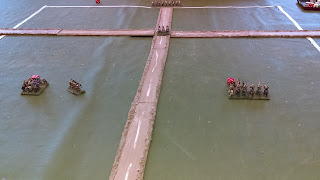 I quickly attacked the advance guards, with varying degrees of effect. Attacking first gives quite an advantage in hand to hand, as you only inflict hits on your turn. The dice behind units denote hits inflicted. It takes 15 to kill a unit. 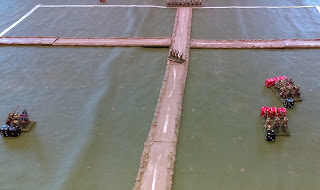 To stop me overwhelming the troops on my right, Will charged forwards with his cavalry guarding the cross roads, so my archers sneaked round the back. 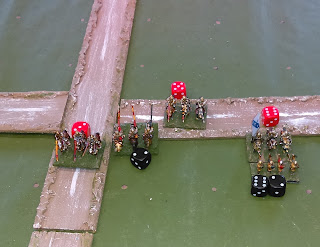 I defeated all the advanced troops, but all my stuff was damaged. When Will's reserve of 3 knight units got on the table they made quick work of my forces and Will won.

We then tried it again, with the "Rifle and Sabre" rules, using Bolivians and Chileans. Neither of us got cavalry, but we both had some artillery and rifle armed infantry. 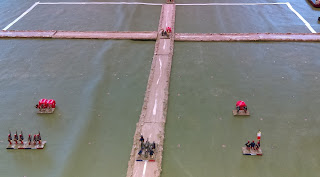 Going first let me pour fire into the advance guards, and also shell the artillery guarding the cross roads. 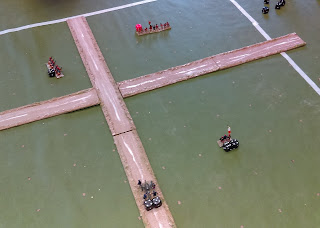 After a desperate fire fight I overwhelmed the advance guards and blew away Will's artillery. I was then able to move across the table smartish and intercept the reinforcements and finish them off.

We then changed to Scenario 2, "Pitched Battle 2 ". We switched to ancients, and I got Germans and Will got Romans. The aim here is to hold both the hill and the crossroads at the end of 15 turns. I don't know how balanced this is, as the hill offers a benefit in combat, whereas the road doesn't. 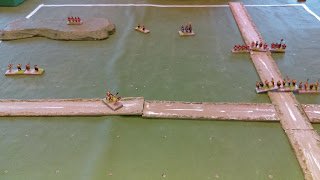 Will put some legionaries on the hill, and attacked the cross roads with three other units of the same. He held his middle with cavalry and skirmishers.  I thought I'd shoot his infantry off the hill with my skirmishers, and then attack vigorously from the crossroads. I put my archers in the centre. 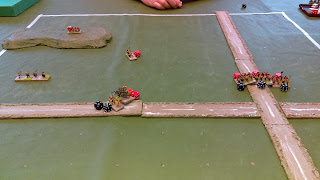 Well, the skirmishers couldn't hit a thing, rolling successive 1s on multiple turns. Will hit my archers with his cavalry, and did a lot of harm. I got the drop on the legionaries on the right and started to inflict casualties first. 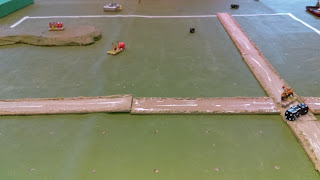 In desperation I tried to get a 2:1 fight on the hill with my skirmishers. I soon found that they were no match for uphill legionaries. So Will held the hill. I saw off his other foot on the right, and also succeeded in doing for his cavalry, so I held the cross roads. A draw as time ran out.

Finally we did Scenario 3 "Control the river", using the Dark Ages rules and my Khmer and Thai armies. 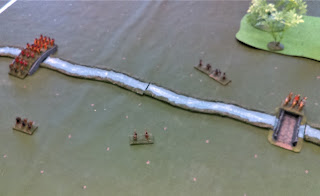 As the river was impassable we had a slogging match with heavy infantry on the left.  On the right  Will had some skirmishers lurking in and about the woods to cover the bridge with missiles, backed up by some warband. I had more infantry to take the bridge and a skirmisher unit to provide cover. 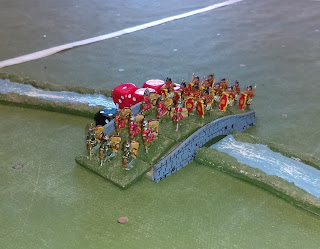 I supported the bridge fight by shooting at the rear units. 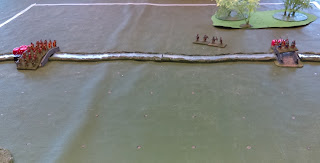 Will eventually shot my skirmishers away, but ended up having to fight my infantry on the left hand bridge. I saw them off, and was able to hunker down on the objective whilst the skirmishers shot at me. By this time we were late on in game turns and I thought he didn't have enough time to shoot me to death. This proved to be right. 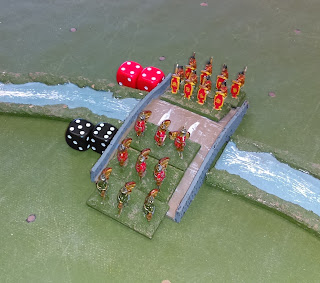 On the other bridge I was getting the upper hand, but we ran out of time. So I got half a win.

We played 4 games in about 2 1/2 hours, all of which provided entertainment. The scenarios do play differently with the different periods, and the randomised armies add an extra dimension. As we got into it all it became clearer that there was more depth to the games and rules than we first thought.

An enjoyable afternoon, and a recommended buy, if only for the scenarios.