A Sunday in Peterborough

We made it to Hereward in Peterborough this year, which is good as it is our most local show. Of course, seeing as how we are in the East Midlands it takes as long to drive there as other shows further away, but no worries, this is the closest we have to a local show, so we're keen to be there.

They fitted us in as they had a late drop out, but hopefully going forwards we'll be a fixture. 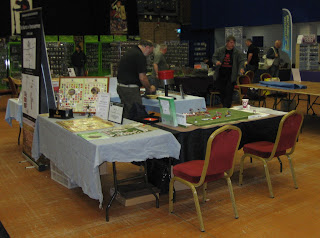 We throttled back on our representation based on what we took to Newark. This was an appearance by the Northamptonshire Battlefields Society on its own. As you can see we still had enough to put up a decent display stand, which we were able to cover comfortably with just the three of us (me, Phil & Chris A). 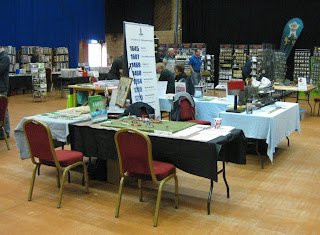 We had the 1460 game which got played 6-8 times, at least. Sold a few of the game books too, - in fact it was the first show where we've sold as many games as we have "Battle of Northampton" books, so that's good. 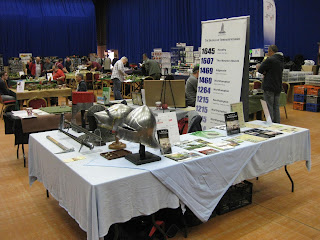 We also had our array of arms and armour. They always prove popular and give us a number of talking points to engage with the public. Everyone loves putting on a helmet. 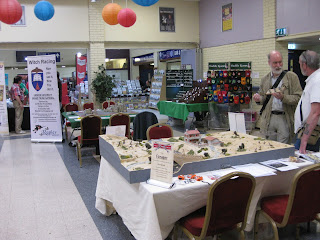 The show is held in The Cresset, which is a combination sports and theatre complex, I think. Chris A described it as a traditional wargames show venue, and I can see what he means. It was so nice to be out of a big convention hall like Donnington or Newark. For a start the acoustics are a lot better. You can talk to people without shouting. 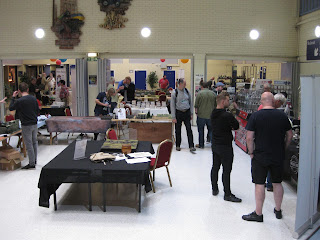 It's a small affair spread over two halls. The footfall from the public was okay, but one of the traders we spoke too reckoned the public was down on last year, and his takings were half. That's a shame as local shows need games and traders or we lose them. 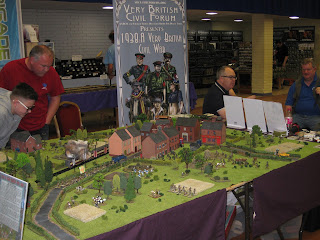 Amongst the display games there were a few of the usual suspects (including us!!). This VBCW game looked great. Regular readers will be familiar with my problems with it. 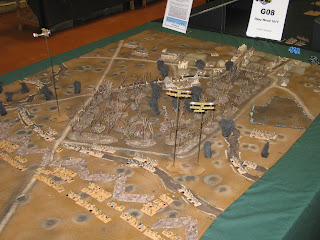 This 1917 game won best game. The lads running it did a good job, and were engaging and approachable. Good effort. 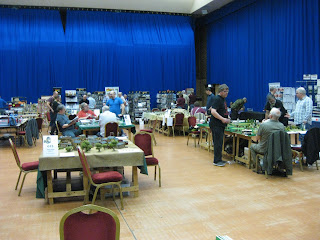 I was so busy talking to people my camera wasn't as active as normal, so I'm a bit light on display game shots. 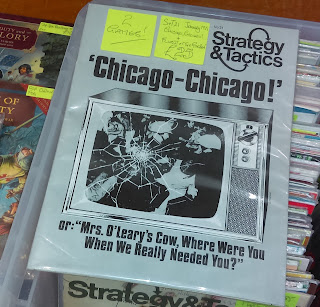 There was a good spread of traders. Dave Lanchester was there, of course. This caught my eye, and I picked it up for a friend who has been playing it with photocopied map and counters. I've played it. Very interesting piece of design. 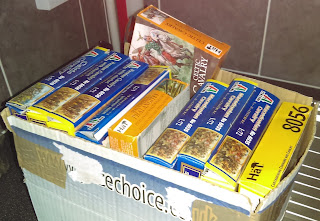 I usually don't find much on the bring and buy, but the show had "Table Top Sales" at regular intervals. Chris A came back from one and said I should go and look as they had "some boxes of plastic figures". I went and had a look and hit gold. I have a medium term aim to increase my Macedonian and Persian cavalry, to give my Celts and Assyrians a rest for subbing for them in big games. My favourite figures, those from Zvezda/Italeri are getting hard to find or are expensive, so a chance to pick up a few at 50p a shot wasn't to be missed. On reflection I should have offered him £15 for everything he had.

All in all a good day out, and recommended for those of you in the East of the country. Long may it continue.