I made some rule changes for the EVA game, and then some afterwards, based on the game experience. I was pleased with how that went, but was concerned that it might have broken the game system for the more professional armies. Consequently it was time to have a go with them as my first game back after the holiday.

For this game I was joined by Chris K and Will (who played the Brits) and Phil, who helped me out with the Imps. 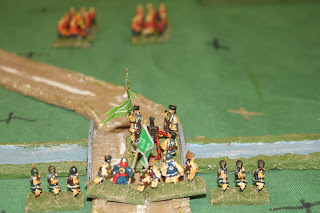 The Imps were set the task of guarding three river crossings. The British had one infantry division and a couple of cavalry regiments (Indian Army irregular horse) with the job of capturing them. The Imps had hordes of stuff, including some top-notch Mongol cavalry 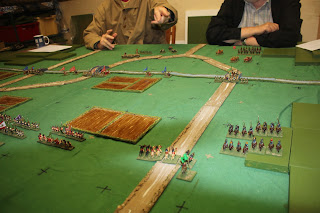 After a quick discussion the British decided to strengthen their left wing and refuse their right. 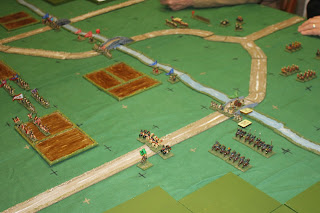 I moved up the Mongol hordes to protect my right. The troops on the bridge were already suffering from accurate British shooting. 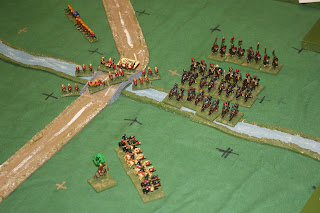 The British infantry rushed the bridge, and routed the defenders. I pushed across the stream and got entangled with the British Indian horse. Cunningly I had shielded my Manchu cavalry, which I was now busy manoeuvring round the flanks. 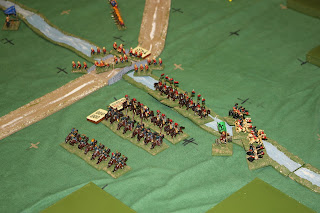 After the first round of combat the Mongols were forced out of the stream, but not without inflicting some damage. The re-written melee rules were showing promise, but they started to become unravelled around about now. 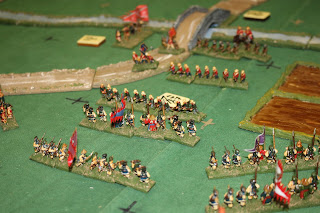 Back in the centre the British infantry had stormed across the bridge, and were getting stuck in with the bayonet. Minor damage had been inflicted on them, and Phil and I were planning to let them press in and envelope them with our superior numbers. 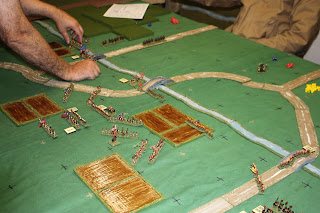 Our centre fell back under the onslaught as expected, and our troops started to turn in on the attackers. On our left our other Mongol horse is going out on a big flanking swing. 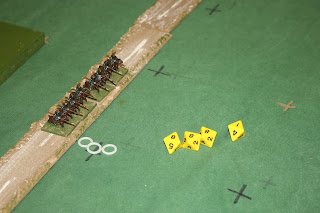 There's a minor disagreement about whether games based on squares are any good, as our cavalry slip through an arc of fire blind spot, but this is soon forgotten as some cracking shooting from the British Field guns stop our Mongols in their tracks. 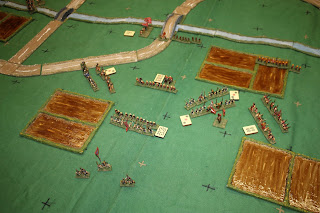 Our centre is starting to collapse, and our inner wings do as well under sustained rifle fire from the support troops. 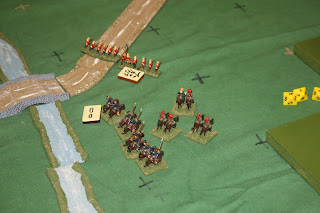 On the right there's been a change in fortunes, and my Mongols manage to break Fane's horse with some devastating dice rolling. My other cavalry is in disarray, but no worries. The British have been severely embarrassed, and the best was yet to come. 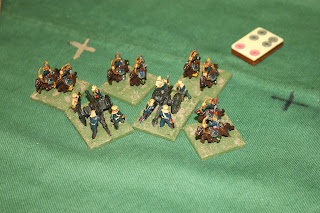 As the rest of our army streamed towards the base line our remaining Mongol unit on our left put in an unbelievable charge, and despite taking some heavy hits were able to overrun the British Artillery line. Win for the Imps, I think.

So I'm happy with the changes I made to the firing and the dice rolling resolution system. The melee system is in disarray and can't cope with multiple unit combats. I've got some work to do there, but it should be fixable.

In other thoughts there was discussion about moving to offset squares, which would fix the arc of fire issue.
Posted by Trebian at 17:56