It has been quiet here as Mrs T and I have been off on our travels. This time we've been to Borneo to look at wildlife and stuff like that.

It wasn't a history trip, so I have come back with no pressing need for a new army. We did visit Kuching and Sarawak, so I had a quick read up on Brooke of Sarawak, the White Rajah. I got interested in him after reading "Flashman's Lady", but couldn't work out how to game it properly, so I've left it and not gone back.

We did some river trips in small long boats, which (except for the modern motors) are close to what the locals used in the 19th century. The waterways are mostly unchanged by human interference, so are close to their primal state. It was quite atmospheric moving slowly up them. Easy to imagine Brooke and his men making their way up cautiously, prepared for attack from pirates at any turn. 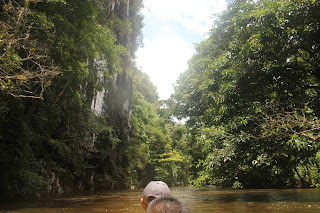 It can be quite claustrophobic at times, and the side tributaries come up on you quickly, and aren't obvious. Ideal for ambushes. 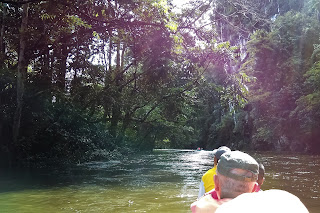 Brooke took a side wheeler paddle steamer up rivers like this. Mad as a hatter.

The original locals lived close to nature in the forest/jungle, and used blow pipes with poisoned darts. We got to shoot one in a visit. The blowpipes are about 6 feet long and come with a spear head/bayonet on the end. 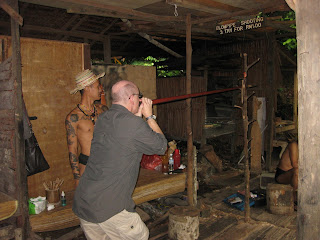 You'll be pleased to hear that I managed to hit a lager can with my third dart at a range of 10 metres. The pipe pulled to the left, so once I'd worked that out it wasn't hard. Admittedly I was using a rest. 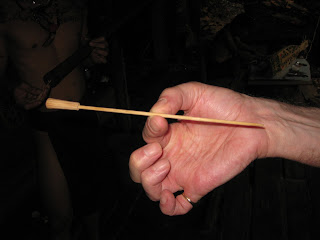 Because I hit something I got a dart to take away. The tail flight is made of soft bark, so it fits snuggly in the pipe. The pipes are drilled out of a single piece of ironwood, using a metal bore. Before the advent of Europeans they drilled them out with bamboo. Must have taken forever.

The only other point of note is that one of our guides did talk about local traditions a lot, and let us know that his grandmother was a shaman in the 1960s, and his grandfather was a headhunter at the same time, until he converted to Christianity. When he died, they found his head collection amongst his things. 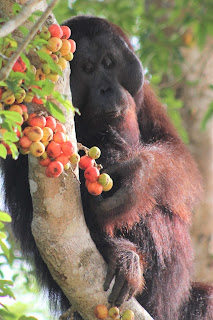 Finally, nothing to do with wargaming or history, but I did take this rather good picture of an orangutan in the wild.

Email ThisBlogThis!Share to TwitterShare to FacebookShare to Pinterest
Labels: Borneo