I've got to produce a load more phalangites for the upcoming Paratikene battleday in 2018. My original batch were painted in oh-I-don't-know-when, so have been around for quite a while.

The Hat phalangites come with open hands and no pikes, so you have to supply them yourself, which isn't a problem. Soft plastic pikes are not up on my list of really good ideas. When I did the original figures I used uncovered florist wire for spears. This was a good, strong but bendable wire in natural metal that you could buy in packets of 30cm lengths. Just about a year ago that packet finally ran out. My endeavours to buy further packets have been frustrated as all anyone seems to do now are the plastic coated variety, which I don't want. I don't fancy stripping off the plastic coating.

As a stop gap I bought some model control wire from the local model shop, but that's expensive, relatively speaking. Phil, of course, uses purpose cut copper rod with hammered and shaped heads for his figures. That's even more expensive an option, so Mr Cheapskate isn't going to do that, is he?

Monday Night regular, Chris A, mentioned recently that he was using brush bristles. Yes. Bristles off the head of a floor broom. Plastic ones, mind you, not the woody ones. And the thick, stiff ones you use for sweeping outside, not your carpet.

I started to look around for a suitable broom head and finally came across one in Wilko. 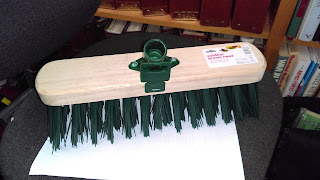 I bought a Wilko "Outdoor Broom Head" for £6, which seems to do the trick. A quick check indicates it'll give me about 2,200 spears or pikes, which should see me good for a year or to. 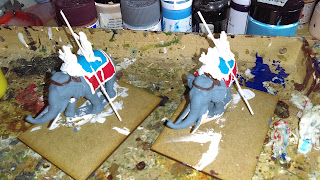 I've trialled a couple on some elephant crew I'm working on, and they seem to stick with a blob of super glue and do the job okay.

It is also possible to squash the end of the bristle flat with some pliers, and then shave it into a spear point with a modelling knife, or clip it with toenail clippers.

Won't be doing that any time soon. After all, none of my other figures have such super detailing as part of their weaponry.

So the experiment is looking quite good at the moment. Of course, having done this and discussed it at our regular Monday Night game it turns out everyone knew this anyway, especially the bit about the toenail clippers. However, I've written the post, so I'll post it anyway.

And whilst it may not be exactly a new idea, it gave me a good title.
Posted by Trebian at 09:47