Well, it's no good buying one of these if you don't build it, so I set aside an afternoon and set to it. I 'd had an initial go a few days back, but got confused about which way round things went. I decided I needed more space so I could lay out the sheets of pieces like they were in the instructions and also have room to build it, so I put all the pieces back in the frames and set it aside for a later date. 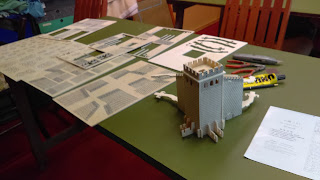 One of my tables in Shedquarters turned out to be perfect for the resumption of the build. The light is good, and these do produce a lot of bits and saw dust, so it's best to be out of the house as well. 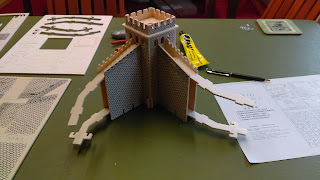 It wasn't completely intuitive at first, and the numbers in the instructions were really small. I also felt the need to glue some bits in place in preference to using the locking-lugs which protrude from the base area. 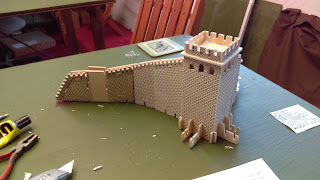 As I added more bits it all became clear how it was supposed to look. Some bits were a tight fit, and others left gaps. These kits are not as well engineered as those I got in Iran last year. 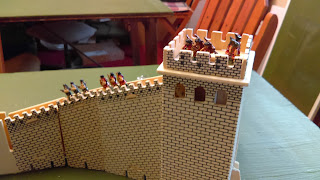 A quick test showed that after my re-basing my Chinese would be able to mount guard if required. 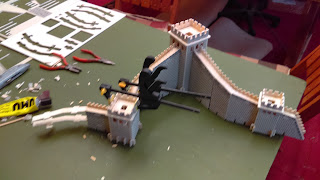 A bit of clamping was needed, however, to keep it all together whilst glue dried. 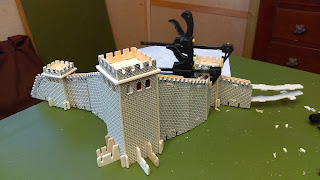 Shaping up well, I think. 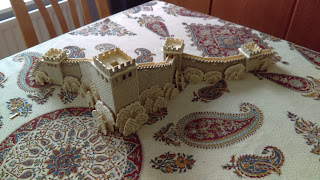 I didn't finish it all in one afternoon, and had to retreat in doors to avoid Storm Brian whilst I put together the vegetation. Surprisingly annoying as I didn't need to snap the lugs off after all, - concealed by the bushes - and I was thrown by a typo in the numbering of the pieces. 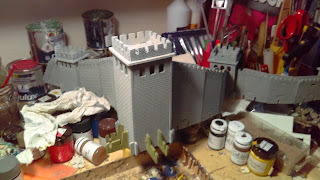 I decided to try to paint this model, but was concerned that I'd lose the stonework printing. The puzzle is made out of soft plywood so I mixed up some really dilute vinyl paint and used it as a wood stain. I was able to trial it on the frames left after I'd taken out the pieces, and it looked like it would work okay. 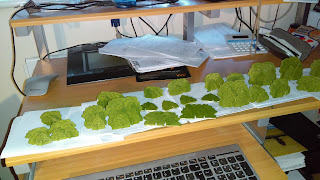 I disconnected all the shrubbery round the base and stained it green. It was important to keep the pieces in order and not mix then up, something I almost achieved. 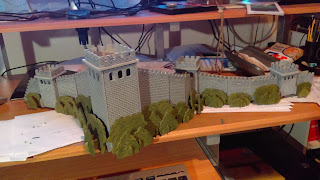 It clipped back together okay. 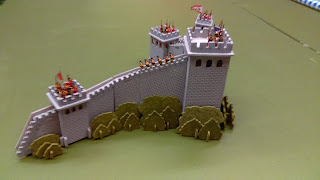 So I nipped out to Shedquarters again and put the guards back on it. They won't fit "All along the watch tower", something I'd try to cure if I had my time again. 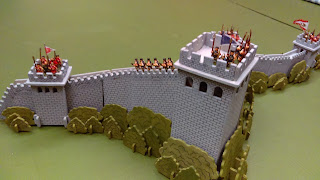 I think it looks rather spiffing.

In summary, easier to build than the Chinese house, - or at least easier on the fingers. It is about two feet long, - so not sure how practical it is. It'll just probably sit in the corner of the table and look cool, although the shrubbery looks like it might have wider usage.

The experiment with the staining is a success, so I'll revisit my other building when I've got the time.

Yes, feeling rather chuffed with this.
Posted by Trebian at 22:05