Having painted the Wall, I really needed to turn my attention to the walled house. Whilst it is quite effective in its original colour it now looks out of place next to another model of the same sort which has obviously been painted. I also had to cut off the lugs under the base and glue the remnants in place so the building held together and didn't look like it was floating in the air anymoe.

One of the reasons it didn't get painted first time round was it was hard to work out exactly what was what before it was assembled, and once I'd struggled to assemble it I didn't want to take it apart. 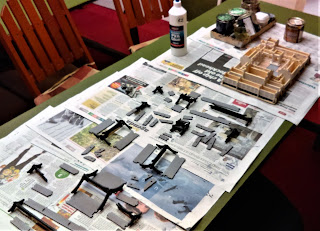 I knew I'd have to take the roof off to paint it, so that needed some space to lay it all out and keep it the correct order so I could put it back again. That's why it is out on the table in Shedquarters not on my desk.That then meant I wasn't sure how much I needed to take off. In the end I took out the roof beams as well. For the painting style I based it on my visit to Shenzhou when we were in China back in 2013, which is mainly white with grey tiles and black wooden framing 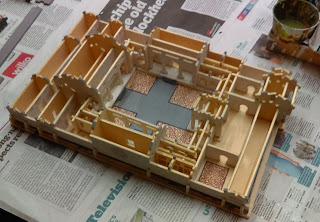 I stained the wood with heavily diluted paint again so I could see the printing. This was less of a success as the printing was in a light-ish brown instead of black and more easily obscured, and using white made it more difficult as well. Now I'd given myself a problem as I wanted to have external walls white and internal walls in plain wood and I couldn't tell what was what with the roof off.

And I also wasn't sure how to paint the central courtyard. 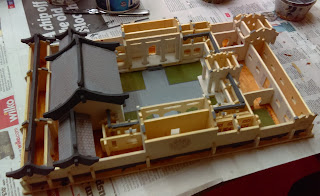 As you can see the white isn't as white against the pine wood colour as you'd like. I also decided to varnish the internal floors with wood stain varnish and ended up varnishing all the floors as, again, I wasn't sure which were in and which were out. 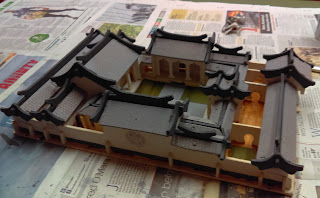 With some relief I was able to get the roof back on in the right sequence. The paint made some of the wood swell so it was a bit of a push to get some of the pieces back in place. 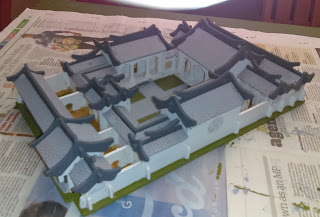 A quick splash of green on the base still showing externally finished it off as a bit of contrast to the white walls. 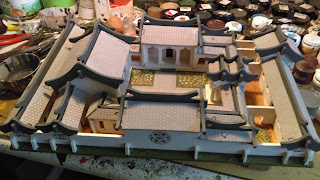 The following morning when I got it back inside I realised I had gaps between the wall and base, so I needed to put pollyfilla round the outside and repaint in green. I also found that the over painted printing didn't work so well so I painted over the symbols and window markings in black. This had a mixed success as my hand went a bit wobbly whilst painting.

I wasn't sure how you capture the effect of the Chinese Garden, either. I thought about gluing in some pebbles and other bits and pieces to make it more 3D like, but decided not to as it is the only flat space you can stand figures on in the model. I therefore did some impressionistic blotches in grey, brown and yellow and hoped for the best.

I think it looks okay, which is a relief. Painting a model like this is a bit of a risk, because if you don't like the result you can't undo what you've done because it's wood and you can't dip it in paint stripper.

Any how, ready for Monday's game.