So Derby isn't in Derby anymore. It's just outside a village called Bruntingthorpe in Leicestershire, which is about 40 minutes from Trebian Towers. This makes it my most local show. That's the good news.

It had to move from Donington as the venue is no longer available. Also the organisers are now KaiserRushworth Ltd, the army carrying stuff people. The bad news is that the venue is quite a bit smaller. That means smaller trade stands and a smaller area for displays and participation games. Everything is really crammed in, which improves the feeling that it's really busy, but also means it's hard to get at stuff sometimes.

For the first time in ages I wasn't on a stand. Due to the changes the SOA/NBS/BT stand had slipped off the list and we hadn't got in touch to say we were attending. Still, it meant I could go to a show free and unfettered, and Phil got to play in the AdlG tournament.

Most of the traders you'd expect were there, but for some - eg Irregular - the shift is just too far south for them. We were also missing the wonderful WD Display team North, for similar reasons. Perhaps I should put camp beds up in Shedquarters next year so they can stay over.

The other bad news is that I'm really short of pictures. My compact camera finally gave up the ghost in Borneo and my Smartphone battery discharged itself completely for some unknown reason.

As the show is local I got Shedquarters newbie Gary to come along. He's new to figure games, so it was quite interesting to see his face and hear his reaction as we went round.

We did get to do one participation game, - Baccus 6mm's rather magnificent "Manchester 1642", built by Derek of that company. Last year I played in his first ECW game, which was of mixed success, being the first time he'd run it and using a version of the Bolt Action activation sequence. He's made quite a few improvements since then. 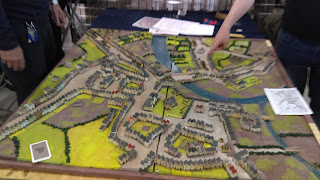 The model is superb. It really looks like a 3D representation of those 17th century city maps, with lots of little houses lining the streets. 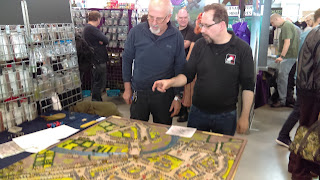 Gary took the besieging Royalists, and I got the defending Parliamentarians. The game has a variable length, set at the start, and a weather mechanism. Turns represent a day, so you can do quite a lot, although you need to have command figures to do stuff, and they get a maximum of three orders a day. However, you also have a limited number of command dice drawn from the bag. You determine how many you get by playing cards each go, (court cards have a random effect) so you may have the ability to give 12 orders a turn, but only have 6 command dice in the bag. 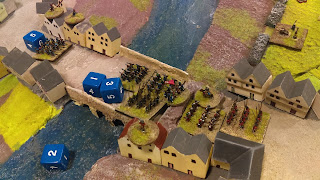 Gary started the game in the pouring rain, trying to storm the main bridge from the Salford area at the east end of Deansgate. The fighting was fierce. 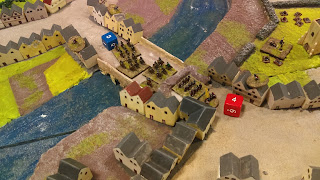 This is me counter attacking. Then the phone sort of gave out.

Gary managed to fight his way in at the west end of Deansgate, and also did get across the main bridge. By the cunning use of a parley (play a Queen card) I took a day out of proceedings to reorganise. I was able to counter attack and recapture the bridge, and drive back the Royalists at the west end. A last ditch cavalry charge across the main bridge was thwarted, and the two exhausted armies drew apart after four days of hectic fighting. Good, tense, close game.

Derek is still developing the mechanisms, but he runs the game in an engaging fashion so I'd recommend it. It's original and plays really well, and it's a break from the hulking 28/40mm figures, mechs, pixies and other stuff you usually see. (Peter Berry of Baccus wrote an opinion piece on his website about the obsession with 28mm which is interesting. It's here if you haven't seen it. It shares some similarities with this blog from a few years ago).

A quick turn round the trade stands and a catch up with the usual suspects and it was time to head home.

The show is back next year at the same location, so that's good for me. The question for the traders, societies and display teams is whether the footfall was enough, and can they deal with the space issue.
Posted by Trebian at 11:25