It's been a few days since a posting, and the frequency has dropped off a bit for a number of reasons. The main one is that I'm actually doing paid work on a contract which involves commuting to Belfast and that's taking up time, cutting into my wargaming as well as my blogging.

Anyhow, this Monday I'm back at Trebian Towers and not due to jet off until next week (a sound choice, I think you'll agree, with Hurricane Ophelia bearing down on the Emerald Isle) so a chance to re-assemble the Monday Night Group and fit in a game.

Whilst I've been spending some time on my 19th Century Chinese I thought I'd go back to a project I last looked at in 2014. That's the Sumerian armies, and my "To Ur is Human" rules. Well, why not?

It is always entertaining going back to something you wrote a number of years ago and wondering "What does that mean?" and "Why did I do that?". It's also quite helpful. When developing rules you can get into the same loop in terms of looking for game play solutions and taking a break can free up the thought process. Certainly taking a few year's break from the SCW improved "If you tolerate this" an enormous amount. "To Ur" has a central combat system that is still essentially ripped off from Neil Thomas' "Ancient and Medieval Wargaming" and probably needs replacing (although Phil likes it because (quote) "I understand it".

The scenario was that King Ergan of the Arkadians was out to punish the Erammites who had stopped paying him tribute. He had brought a large force with the aim of crossing the river that marks the border of Eram, burning a few villages and taking some Erammites as slaves.

Will and Chris K got the Arkadians, and Phil got the Erammites. In the picture below Will and Chris are to the right, Phil to the left. I did a quick introduction and ran through the salient points of the rules. Chris K missed the whole "To Ur..." development cycle and both Will and Phil claimed not to remember anything (although particularly in Phil's case you could see his eyes light up as he remembered how it was all supposed to hang together. 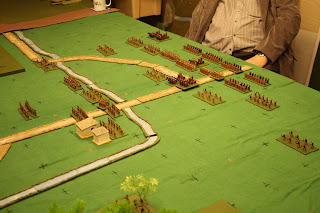 Chris took a look at the board, asked me whether the Battle Carts were Tanks or Helicopters* (er...neither, they're sort of fear and pursuit weapons) and then positioned his unit lined up on the ford for an opening charge, rather than leave them on the wing for a lightening dash to the rear which was where I'd put them.

So turn one, scene one, battle carts ordered to charge. 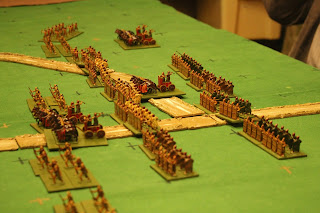 The rules have a three level Fear mechanism. Units are either in Fight, Fright or Flight mode. In order to charge you take a Fear Test, which tells you if the chargers will charge and if the defenders will stand. The test takes into account a few modifiers, such as support and whether you're likely to win the melee and cross references them with a die roll and unit type (Elite, Trained etc). That tells you if your fear level goes up or down.

In this case the Battle Carts looked at the block of infantry with supports on the ford and decided not to go, dropping to Fright mode. Even so, they were urged forward a square, and sat opposite the Erammite unit glaring at one another across the ford. 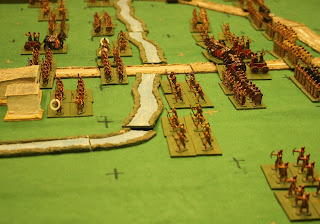 As both sides had a fair number of light troops with javelins, slings and bows casualties were already being inflicted. 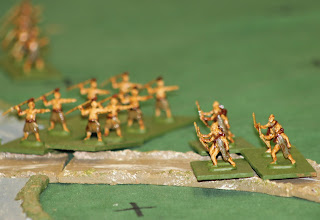 The fords were proving to be a particular focus of attention. 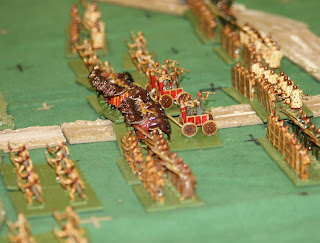 As his Battle Carts resolutely refused to charge, Chris moved up his Lugal (General) to encourage his Carts to get on with it. They weren't having it. 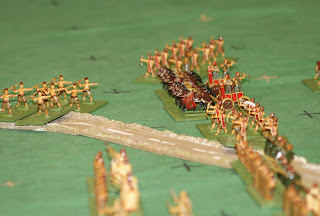 On their right flank Will pushed forwards with his Battle Carts supported by massed archers. 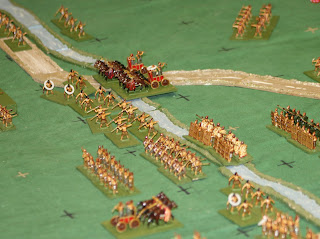 Will then launched his Carts at the slingers guarding the stream. Phil by this point was demonstrating that he could, on occasion, exceed the odds on the dice consistently. Not only did they refuse to run as the wagons rumbled towards them.... 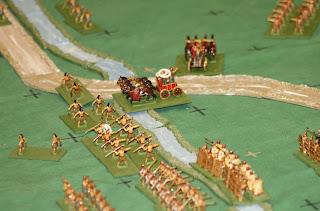 ....but they also inflicted a reverse upon the nobles of Arkadia that they will find it hard to live down. 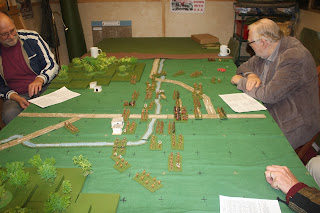 By this point Phil was feeling quite pleased with himself and Will & Chris, whilst not in actual despair, were gazing upon the ruination of their plan with dismay. 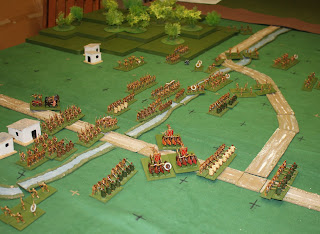 Chris had to try to extract his carts in order to bring up his Guard infantry (the blokes in the white capes). 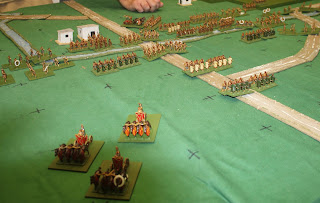 This occasioned a counter attack by Phil's infantry across the ford, which saw the Carts leave the field in a hurry. 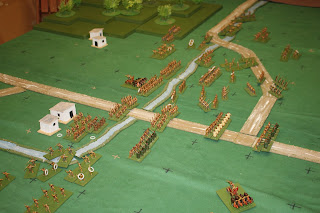 The heavy infantry of both sides was now engaged all along and across the line of the stream. Some of the Arkadian infantry was already heading for home. 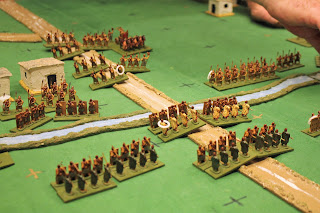 Chris had succeeded in forcing the line of the river and was fighting amongst the huts of one of the villages. His elites had also broken their opponents and were about to cross at the ford. 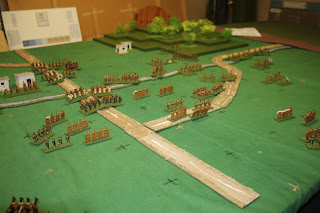 In the next two moves it all went a bit gooey for them, however. A counterattack in the village sent Chris' infantry away in Flight, and on the other side of the Arkadians at the ford, vigorous use of combined heavy and light troops had also broken the rest of the Arkadian phalanx. It was game over for the invaders. The Erammites won't be paying any tribute for a while.

I was a bit rusty with the rules, but I think we soon got into the rhythm of how it all works. The Fear Test component can be a bit extreme at times, but overall it works as I'd like. There's no real need to tamper with the system, but I might take some time to look at the combat mechanism if I'm not working on anything else.

Quite a fun way to pass a Monday evening.


*This is short hand in the MNG devised by Ian Russell Lowell. It means are they battering rams, like Assyrian chariots, or do they flit around shooting lumps of folks like Egyptian ones.
Posted by Trebian at 10:42