Having painted my buildings it was time to include them in a game.

Firslty, however, just for Tony, here are some eye-candy pictures of the finished articles: 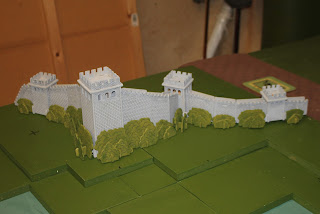 I suppose this is the front.... 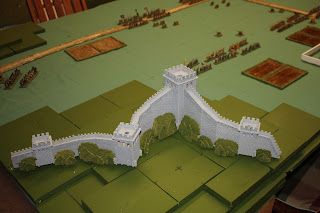 ...or perhaps this is? Probably the side with the crenellations is the front, so that would mean the top picture. In which case, this is the back. I put it on a hill because the Great Wall is mostly on the top of hills. At least the bit I visited is. 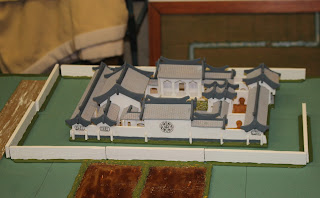 The Chinese Walled Garden House has now got another set of walls round the outside to finish it off. 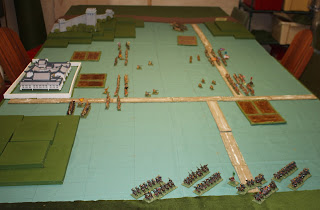 So the game was a field force of Taipings defending a town against a force of Manchu and Chinese Bannermen and a few units of Mongol Horse*. My aim in this game was to provoke a lot of hand to hand combat to try out some rule re-writing I'd been doing. I'm having some issues with "Taiping Era" that are proving intractable. The hand to hand rules are not as clear to me as they should be, and the outcomes can swing too violently. Just when I think I've fixed them for European v Chinese combat I find I've broken them for Imperials v Taiping. It might be that my aim to have one set of rules that cover all types of conflict in mid-19th century China using one core mechanism isn't achievable, but I feel I need to keep trying.

So, Taipings to the left, commanded by me & Chris K, Imps to the right with Chris A and Phil. 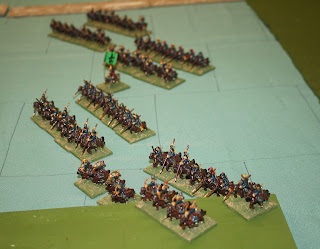 Phil had the Mongol Hordes and swept up into the hills. I should have made them impassable. 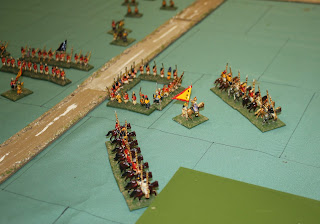 I responded by putting my cavalry on alert and forming a square/schiltron/hedgehog with my Taiping spear men. 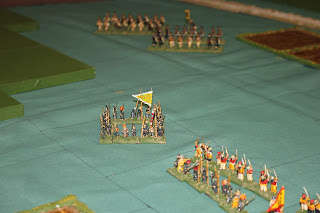 Chris was forced to do the same because of the Manchu horse on the other flank. 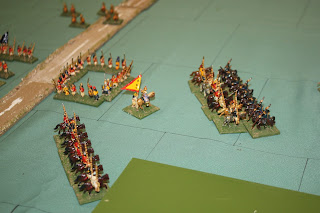 Soon my cavalry were clashing with the Mongols. 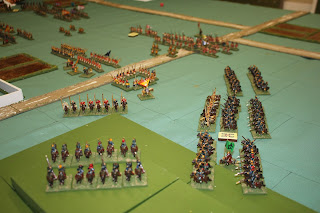 I won the first round of combat and drove them back. With the rest of the horde gathering that might have been a mistake. In the centre the Tiger Men had chased off our jingals in the battle of the skirmishers (NB must write some rules for when skirmishers fight other skirmishers.) Elsewhere we waited for the Imperial onslaught. 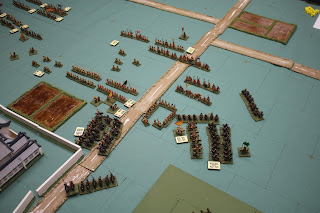 And wondered why the photos suddenly went dark. Both my cavalry units were now getting the worst of it, outnumbered 8 : 2 they were putting up a brave fight, but it wasn't looking promising. 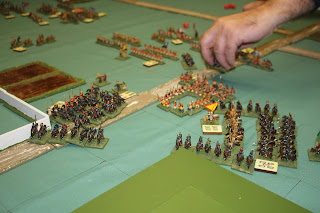 One of my cavalry units was now almost completely surrounded. The Imp infantry charged my square, but it availed them naught. 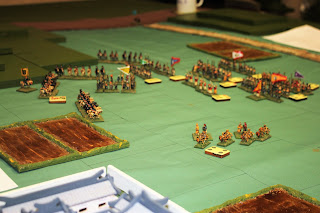 At the other end of the table Chris K launched a ferocious series of charges on the Imp foot, driving them back. The Manchu cavalry circled round, reluctant to close. 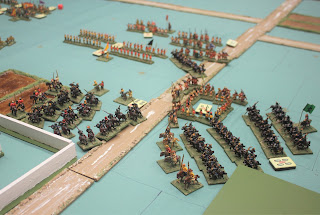 All my cavalry were now broken and were fleeing in disarray. In the centre my foot were advancing steadily. 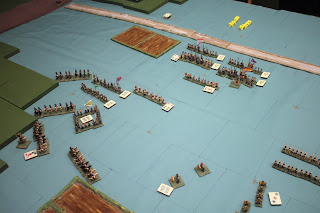 The Imps facing our left were in a bit of disorder now, as Chris followed up his attacks. The stand off round his square was tying up a lot of Imp units. 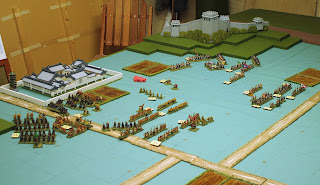 The Mongol Hordes were working their way round our rear. It didn't look good. But at this point both the Chris' had to leave, so we put the game on hold. 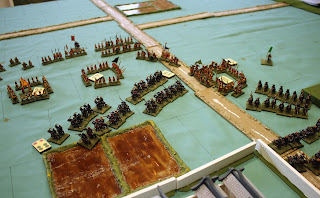 I played through a few more turns the following morning. My advance in the centre was halted by the need to form square because of the Mongol Horse in the rear. 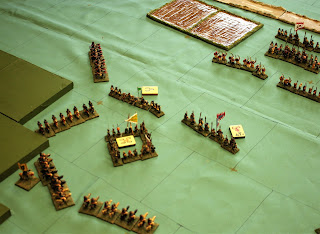 The other flank was on hold as desultory matchlock fire held off the horse, who refused to charge. 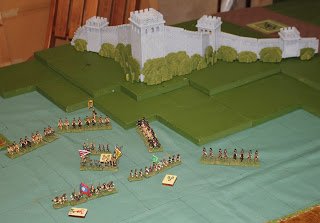 Yes, in the shadow of the Great Wall it was all a bit static. 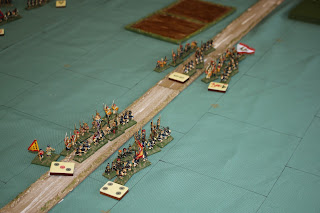 We continued to drive off the Imp foot on our left, and would probably be able to breakout. 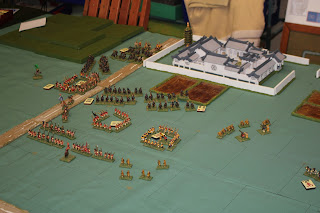 On the other side it was all a bit helpless. Pinned in place and subject to greater firepower it was merely a matter of time before my squares collapsed.

So a win to the Imps, just about, down to their overwhelming cavalry strength. I learnt a lot about the rule re-writes, which seem to be going the right direction. You'll note that compared to earlier games this was played on offset squares, so some adjustments needed to be made. I was reluctant to make the change, but it did improve the way the game worked with all the cavalry about, so it will be persisted with.

Still some work to do.

But the buildings looked nice.

Although I do need some more Taipings and a few more Imp command figures, now I've written command rules.

*BTW I am aware the Pings didn't get as far north as the Wall. But it looks nice.
Posted by Trebian at 16:06