For November my monthly SPI retro game meet up featured the well-regarded "Ney vs Wellington". Published in 1979 and available tin the May/June edition of S&T, this game covered the Battle of Quatre Bras at battalion level, and used the "Wellington's Victory" game system.

This is quite a complicated game. It's a tactical Napoleonic game, and has a lot in common with 1970s figure games. Units can be in different formations, - column, line, square - guns limber and unlimber, infantry puts out skirmishers and so on. There's a lot going on, a lot of units and a lot of markers.

The rules for the game, with scans of the counters and map can be found here. Alas the definition of the map is poor, and it is hard to make out the hex numbers.

No matter. When I arrived at Gary's he was still pushing out the counters. Yes. He had a pristine copy from his 1979 S&T magazine. BTW I also have the magazine but not the game. I do not remember ever playing it. Alas my brother had all of games and has lost them. I am more than a little annoyed about this.

I do not recall ever playing it. I suspect that at the time I was playing Napoleonics with figures against my mate Derek and had large armies of mixed Airfix / Minifigs / Warrior / Hinchcliffe figures, using Bruce Quarrie's rules. I had no need for a tactical Napoleonic boardgame.

Any how, as I'd found the rules online and Gary had the original we'd both had a chance to read them before we got together. This was interesting when we met, as Gary knew nothing about Napoleonics and so was really struggling with what the rule mechanisms were trying to make him do and what it all meant.

Gary decided defending was easier, so I took the French. The first problem I had was working out where everything was, and what it was (where are my guns? where's the cavalry??) and then deciding on a strategy. Basically the French have to get north of the Namur Road that runs from top left to middle right and occupy Quatre Bras, which is the crossroads. On the French left is Bossu Wood (the big green blob) and there are marshes and a pond on the right. The Namur Road offers quite a good defensive position with the edges lined with cover. There's also some reverse slope. 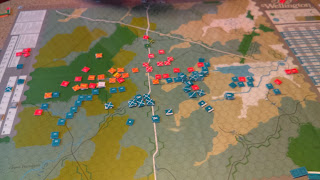 I had two thoughts. One was I had a lot more light infantry at the start, hence more skirmishers. I intended to flood Bossu Wood and turn that flank. In the middle I had a lot more cavalry, so I meant to threaten the allied infantry, force them into square then blast them with artillery before close assaulting with infantry in column. The aim was to do this quickly, before all the allied reinforcements turn up. 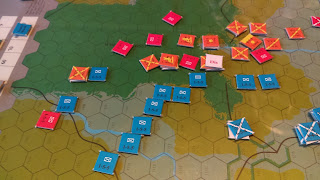 Early on I had problems getting into Bossu Wood as Gary tried to defend as far forward as he could. I had a lot of skirmishers as my Voltiguer units split down into 6 counters (marked 1-5-5), where as his Belgians & Dutch can only give up one each, and sometimes not even that. At this stage things are a bit confusing as we kept forgetting that units in woods are automatically disordered so don't need "Dis" counters. One of the problems with this game is that the counter stacks get big as you also put strength markers under the units when you give up skirmishers or are hit. You then add status type markers, or formations and commanders and it isn't always clear what you've got where. That's where the analogy with figure games break down. 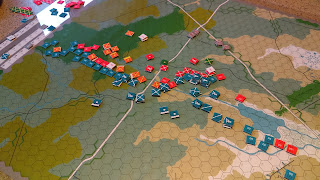 At this point of the game I went through a phase of not rolling any 6s (luckily this flipped later on) so my skirmishers really struggled to push the British skirmisher screen back. Eventually I had to clear some with cavalry which was a risk and a waste. Gary had chosen to defend forward and was chucking stuff down the main road very quickly. His units were also a bit bunched. 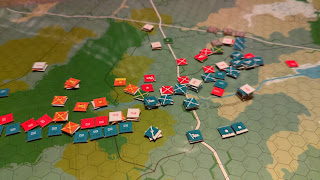 I didn't take a lot of pictures, and we didn't finish the game. We're about 30%-40% through at this point. This picture is taken near where we stopped playing. The Allied units at the back with white markers on them are routing. Those in the middle are all disordered. I've got some disordered too, but I've got a rally phase coming up. Out on my right, that's all cavalry, bearing down on troops in march column. In the centre Gary's problem is that I've caught him whilst still in column, and he doesn't have enough room to get into line. My skirmishers have seen off his lights, and I've managed to close assault, - sorry "Shock Attack" - all along the line pretty much and there's a hole opening up. I also have all of my guns deployed on forward slopes so I can hit most units in the centre. Out of picture on my left I've got stacks of skirmishers enveloping Gary's right, making a dash for the cross roads through the woods.

We played for about 5-6 hours, with drinks and lunch breaks. Gary was convinced he'd lost by the time I had to pack up and go, and I would have been disappointed to have lost from here. My chum Russell reckons it takes 20 hours to play properly, as opposed to the BGG estimate of 3 hours. THREE HOURS??? Yeah. Right. Or, rather, thrice tines nay.

It's a game where knowledge of Napoleonic tactics helps if you want to win. It isn't a bad simulation, from that point of view. Knowing what is supposed to happen when reading the rules is is a great help. The rules are quite well laid out, but key definitions such as what happens when disordered units are disordered again are scattered throughout the rules and the cross referencing isn't always great. If I was to play again,  I think I need to go through the rules again and specifically pull out those sorts of bits and put them together in a QRS. Plus the morale rules need a thorough re-read now I understand where they get used.

So, lots of period flavour but a bit frustrating for chaps getting older who don't have fingers as nimble as once were in respect of moving the counter stacks. And there are some lessons in it for my own designs, so not completely wasted.

Be nice to have been able to finish it properly, tho'.