Not quite in Harmony

Right. So. My final Chinese Wooden Building. For the moment. 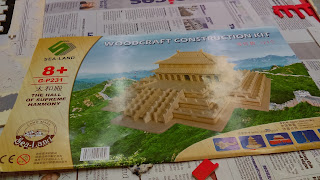 This one is quite ambitious in terms of size and complexity. It's the Hall of Supreme Harmony in the Forbidden City. I took it into Shedquarters so I could lay it all out. This makes it to assemble in the end. 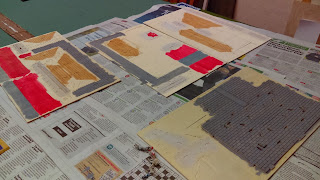 For the first time with one of these I decided to paint before hand. I realised I'd have to touch in some of it later, but it seemed like the best option. The printing on this one was in a very light brown and got lost in the grey. I therefore had to draw in the paving slabs by hand, - something that would have been very difficult if I'd assembled it first. 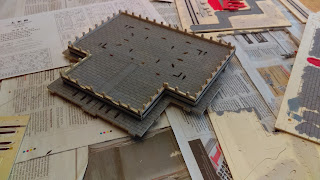 I also had to draw in the black lines on the balustrades, which weren't printed straight. In this case it would have helped to have assembled it so you could see what was intended. You can't win, just as you can't tell from this picture.

The building sits on a three tiered platform which is quite large and stretches across several sheets of pieces. The numbering was a bit hard to follow at this point. 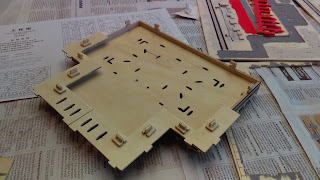 Flipping over you can see it is all held in place with wooden clips. The ones on the base level will need to be cut off and glued so it sits flat. 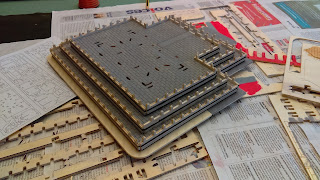 Damn. Missed painting the rear of the base. 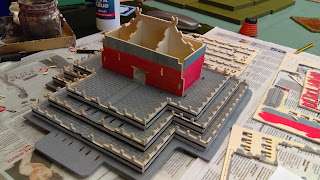 The temple itself is, indeed, red. Or it might be vermillion, because that's the Imperial colour. I painted it red. I remember it being red from when I visited. 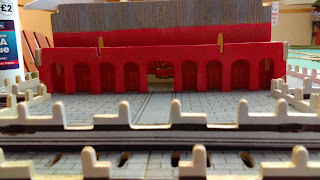 You can just see through the entrance into the interior where there's a representation of the throne printed on the wall. I thought everything was going well at this point, but I had missed fitting the doors. Also the lower level roof supports had a different numbering system and need to be fitted right at the very beginning before you put the walls in the base, not at the end as I thought. 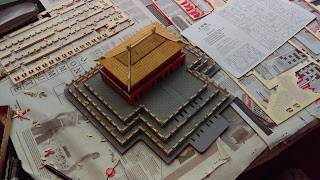 So, anyway, I thought I was doing great, and put the roof on. 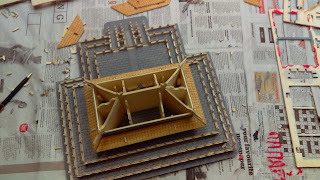 Then I took it off again, to fit the doors. Which involved removing the interior walls and two of the side walls. The doors have working hinges, but because of the roof, once you've pushed them open you can't close them again without taking off the roof. 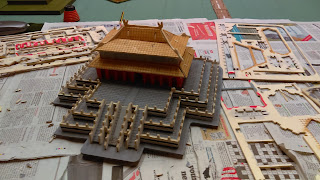 Then I put the roof on and had to take it off again to fit the lower roof. I didn't photograph me doing that, although that also involved removing the interior walls etc. 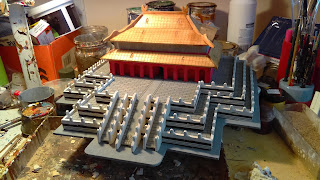 Once I'd run out of bits I decided I must have finished, so I took it inside to finish the paint work. The golden roof is simply done with my normal tinted varnish, slightly diluted. Shiny. 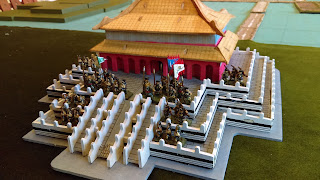 Then back outside for a quick picture with some Imperial Bannermen on guard. They can stand on all the levels, just not all the way round.

This took the longest of all of these models partly because of how I did the painting. I think that was the right decision, but it did make the wood swell slightly, so some of it was harder to fit together.

Of all of the buildings I think this one might be of the least use, although it does look magnificent. It was also hard on the fingers, like the walled house.