The last time we met up with our West Country friend Chris A & I were treated to a game of Dux Bellorum. We were sufficiently impressed to ask Richard to run it again for us up in Shedquarters. It also gave Phil an opportunity to try it out. 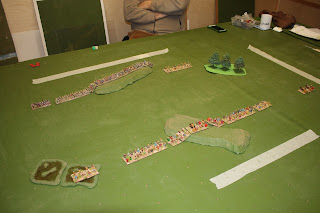 This time I got the Irish, and Chris/Phil got the Saxons. The Irish are near the camera. 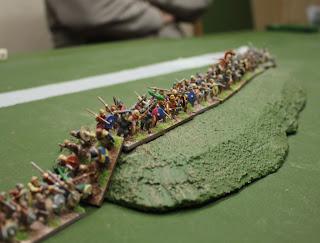 The Saxons set up on a hill. They were the notional defenders for this game. 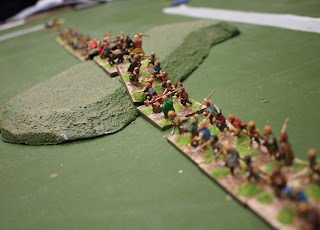 My army didn't really fit on the hill I had. 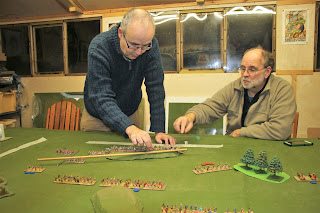 I started aggressively and moved off my hill. My chariots are off on a wide right hand sweep. Phil & Chris worked seamlessly, like the experienced dounbles team they are.

Now I will fess up right now. I really don't know what I was playing at in this game. I resolved to charge the Saxons up hill, although I knew that would be fatal. I made a large number of errors because I couldn't judge the move distances correctly, and I failed completely to think through the consequences of my actions. To sum it up it all "seemed like a good idea at the time". 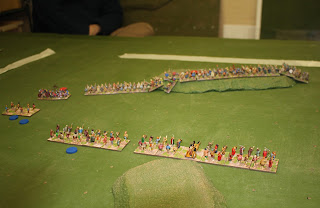 For example I reckoned I could take those units on the flat and hold off the flank guard elite troops with a bunch of slingers. Who can't move and shoot. You'll see how that worked out for me later. 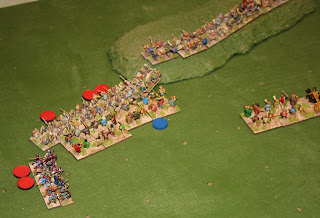 Inexplicably I also thought that I'd be better off using my Leadership Points elsewhere in this melee. Madness. 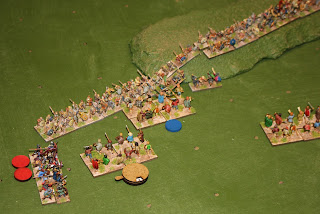 So one of my units got bounced immediately. Because of the rules about positioning for flank attacks I was spared being roughed up by the Thegn's guard in the first round of combat, as Chris lined them up for a killing blow. 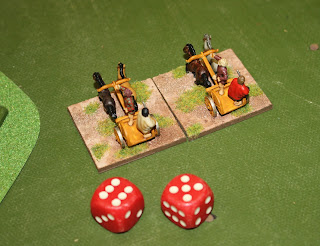 Typically I was saving my high rolls for my chariots movement. In DB you have to roll low in order to move, and high in order to hit in combat. I was getting this the wrong way round. 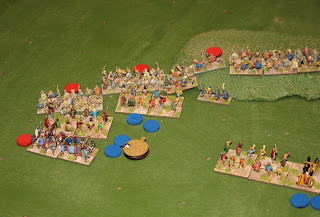 So I got scissored on my left flank, although due to brilliant dice rolling in this round and lavish application of Leadership Points I held on. I even pushed one unit back. In the centre I realised I had got too close to the hill..... 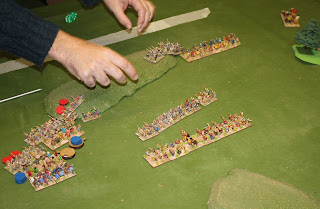 ...so I about faced and retired, tempting the Saxons to surge down off the hill top. 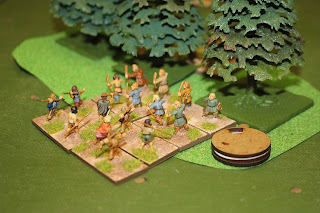 Over on my right the skirmishers were having a set-to in the woods. I'm winning this one. 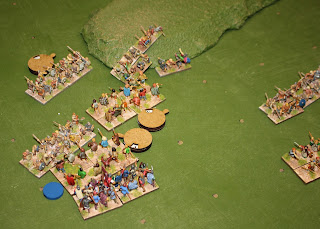 My left is still clinging on, and the Saxons have had to add another unit to try to break me down. My chaps on the left clearly love being surrounded. My sling armed skirmishers are out of shot, slinging into the rear of the elite unit, all ineffectually. 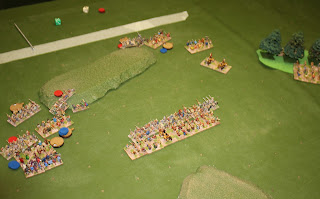 My feigned flight move backfired totally. Chris cleverly chucked a load of LPs into the middle and got to move out of sequence, so charging me before I could turn round. Elsewhere you can see I've got hold of a Saxon unit on the other end of the hill. I should be overwhelming him, but my spare warrior unit just will not move. My chariots, however, are now careering down on the rear of the main Saxon line. In the wood I have killed one unit of skirmishers. 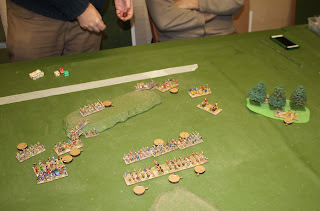 My whole centre line got beaten in the melee, but no one was broken. As I have to retreat following a losing combat and shieldwalls don't pursue I've now got some space to turn and face. But at what cost? On the left I'm a unit down, but I also did for one in return. 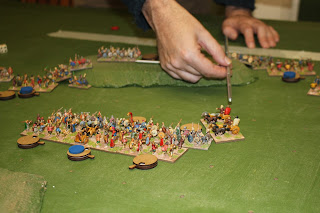 My chariots finally hit the back of the shieldwall, but alas Phil & Chris have an infantry unit free to hit my rear as well. My spare warrior unit on the right just won't move and do anything. 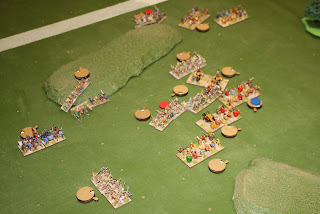 So everything collides in the middle and I can't get an upper hand anywhere. This is mostly my own fault. 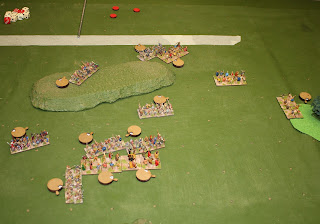 So my chariots get wiped out, and the left hand end of the line is being rolled up. My one ray of hope is top right, but those warriors still won't move.... 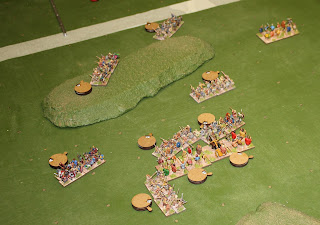 ...and the one melee I should have won results in the loss of another unit. All over.

We had more oddities in this game than the first, - bits where the rule didn't deliver - but overall still a lot of fun. I played one of the worst games ever, I think, and hardly made a correct decision all afternoon.

Richard accepts that he needs to do something with the hit markers, - flock them, or stick dead bodies on them, or both. Something, any way, as they are ugly on the table top. Any how, I will continue to keep an eye out for DB and pick up a copy when I can pay what I think is a reasonable price.
Posted by Trebian at 13:45