It's been a while since the last game with my South East Asian armies I built for DBA, following my visit to Cambodia.

So far the one recorded battle was a win for the Khmer against the Thai, back in June. However I had a chance to get the armies out for a couple of games on Monday, over at Chris K's, so here's a chance to make good that omission.

Chris had a run out first against an old MNG member, Paul Bannon, who actually used to be a regular when we were the WHELKs (don't ask, - it's a tortuously derived acronym) but then left us to go to the USA. They chose to play with the Khmer and the Burmese, mostly because that combination gives you the most elephants.

That game lead to a Khmer win, featuring an elephant shot dead with an elephant mounted bolt thrower. I ran this game as both of them are unfamiliar with DBA v3, as it turns out am I. I made lots of mistakes.

When Phil arrived we reset the game and relayed the terrain. I got to be the Khmer, and Phil ran the Burmese. The Khmer are usually at the bottom of the photographs. 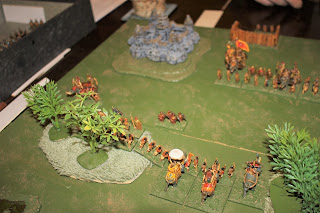 We're a few moves in before I took any pictures. Phil has rushed my troops in the wood on the left, and is giving them a hard time. He is also making a flanking manoeuvre with an elephant. I'm doing something similar on my right out of shot but with cavalry.

As usual I misjudged this completely, and Phil was able to ambush me and get in a flank attack. 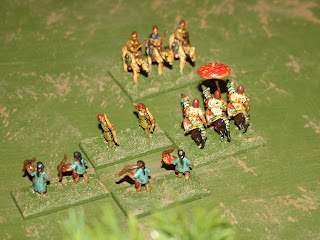 Luckily I saw them off, and rushed up some Psiloi to help me out. 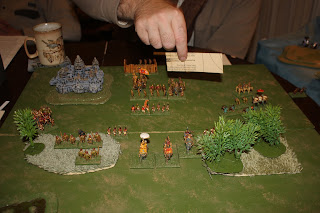 In the wood on my left my auxilia got thoroughly turned over and I was two elements to nil down, and it looked like I was going to be handed a real thumping. Again. In desperation I ran some elements straight ahead, supported by shooting from my elephant mounted crossbow. 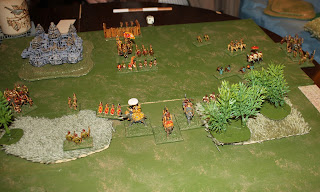 Phil tried to finish me off with his auxilia in the woods, but I did for one of his by flanking him with an elephant. I then killed the two infantry elements I had engaged in the centre, and shot his elephant with my bolt thrower. 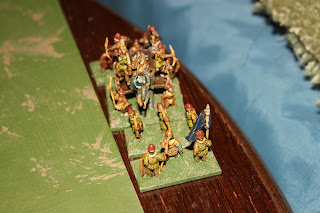 So, if you re keeping count that was four elements dead and a win to me! To prove it, this is Phil's dead pile. And another win for the Khmer, which is looking to be the killer army.

DBA gives a good exciting game that is usually close. I'm not convinced this is a brilliant recreation of South East Asian medieval warfare. In all the games the elephants have not got to grips with each other. As that was the main aim of warfare in this time and place it seems a bit vacant not to have a mass elephant clash in the middle of the table. The need to for two PIPS to move them is harsh, and the need to avoid any terrain with auxilia in it provides further issues.

Still DBA isn't the only set of rules to have problems with pachyderms, so it would be cruel to complain.