There's that thing with wargamers that when ever they find something they like, they want to use it for something else. Like, when you paint up a really nice army for one period or war, and someone says "We could use it for that other war instead". Or, when you find a set of rules you like you immediately try to use them for another period.

So, Richard, our West Country friend, is really taken with Dux Bellorum. What that means is that he now wants to use them for Hellenistic Warfare. He took a trial version to the Society of Ancients Conference this year. Because he's been wargaming with me on and off for a while I must be rubbing off on him a bit, because he decided not just to adapt it to anther period, but to put it on squares too.

After our earlier DB game we went down the pub for some dinner. We discussed his ideas on the adaptation, and agreed to give it a go in the evening.

After all, who do we know with gridded cloths and lots of  suitable Macedonian type figures?

Setting it up was the work of a few minutes. I had Persians, to the left, and Chris took the Macedonians. We both set up with a goodly block of infantry flanked by cavalry, our frontage covered by some skirmishers. My General in the chariot with his bodyguards is comfortably ensconced behind his mercenary hoplites.

BTW I was still suffering from not having a clue anymore, and cleverly put my skirmishers in front of one of my archer units, preventing them from shooting. 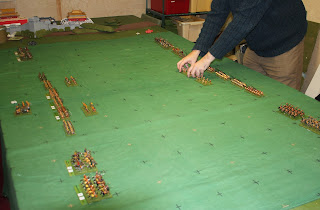 Chris started off with a general advance, except with his cavalry. This is one of those sets of rules where you need to be the moving/charging unit to get the charge bonus, so you don't want to move into charge range first. It was immediately suggested you could use a Leadership Point to order a counter-charge, and this idea was adopted.

This is also a set of rules where you can't move and shoot with your archers. Consequently I sat on my base line and shot away. And tried to fix my deployment cock up. Which was frustrated by rubbish activation rolls. 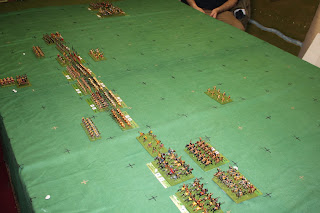 Up at the top of the picture our light cavalry has clashed. At this point Chris revealed his cunning plan, which was to roll lots and lots of sixes in combat. It was a winning strategy. I countered by rolling 5 dice and getting 5 5's, which is annoying when you need a six to hit. 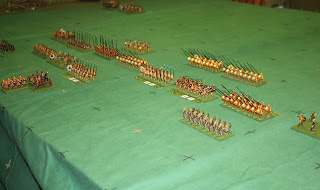 I was shuffling my line about at last, - you can see my general moving to the left. Was it all too late? What do you think? 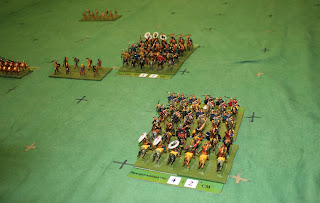 The heavy cavalry clash went my way at first. In the first round of combat I stunned Alexander and his companions by inflicting 5 hits, which would normally have broken him if he wasn't so elite and so Alexander-y. BTW I think the white rings are less obtrusive than the casualty discs we used before. And we're using small stones for Leadership Points, again less obtrusive than the red/blue discs we used in the last game. 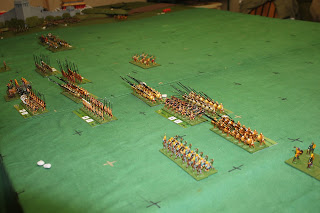 Chris continued with his winning dice rolling tactic with the infantry, and my hoplites were mostly going backwards, LPs or no. 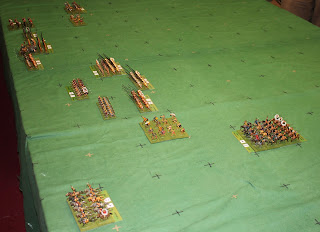 My extreme right wing cavalry got chased off table quickly enough. I thought I had a window of opportunity to do for Alexander, but the first round of combat was the high point.  At the top of the picture my general was being surrounded. You can see clearly the problem with the archers unable to move and shoot rule here. If I'm going to use them then all I can do is sit on my baseline. This needs looking at. Possibly another thing you could do with LPs? 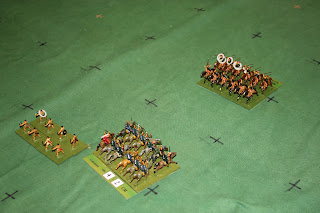 Alexander now had the upper hand, and my remaining cavalry were falling back quickly. 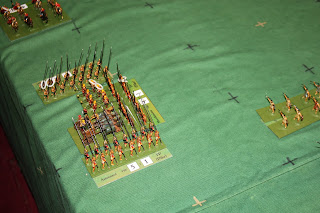 As for my General...well, I don't think Darius is going anywhere now. Another spectacular loss to me

The game played quickly and smoothly. The grid was used in a rigid fashion, with no diagonal movement for infantry. Cavalry could do a sort of knight's move, keeping their facing. This fitted well with the Hellenistic Theme, and is a solution I've used before I think, in the "Rapid Raphia" rules.

Well, I got truly stuffed. Still, it was fun and with a bit more work is a good piece of development. I can see me doing that again.
Posted by Trebian at 10:02