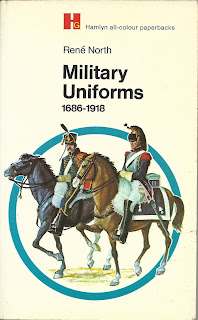 Over five years a go now I wrote a blog about my War of Spanish Succession armies. I mentioned in that blog that my main source for uniform information was Rene North's "Military Uniforms - 1686 - 1918" from the Hamlyn all-colour paperbacks series. I noted at the time, in the comments, that I no longer had my copy.

Well, a few days ago Mrs T and I went up to Market Harborough to finish our Christmas shopping and no trip is complete without nipping into the two rather good charity second hand book shops to see what had been handed in recently. And, yes, there was a copy. Not my copy, of course, but a copy none the less. I paid a princely £1.50 for it, which is quite a mark up on the 6/- or 30p* marked on the back cover but a bargain in this day and age.

This edition is from 1970. I have a few other originals on my shelf from the Hamlyn All-Colour range, priced either at 6/-  for one published in 1969, and 45p for the two from 1972**. Anyway, 6/- was a lot of money for a book back then, or at least I remember thinking it was. After all you could get a box of Airfix figures for 2/11 (ie a penny shy of 3/-, so half the price of the book), and the famous Sherman and Landing Craft kit for 6/-. Standard paperbacks for children - such as Enid Blyton's Famous Five - were variously 2/6 or 3/6 (12 1/2p and 17 1/2p), so I remember these books being a serious commitment in the birthday present request list for some one at primary school.

It's an odd little book in many ways. Why start in 1686? The only clue is that the text says "In 1686 the English 2nd Regiment of Foot was to wear a red coat lined with green..." . The conflicts covered are bit odd, too. You get 26 wars in a 160 page volume, including "The Brabant Rebellion" of 1789 (what????), and an odd selection of uniforms. Napoleon III's invasion of Italy is covered by four uniform illustrations, one of which is a Cantiniere(??), but as Rene points out the French uniforms are the same as the Crimean War, so that's okay, I guess, as that's in the book too. More description in text than pictures, but hey-ho, you can't have everything.

The sections that got the most use would probably have been the ones on the Napoleonic Wars and the ACW, as we could get the Airfix figures for those. Over time it helped me out with the War of Spanish Succession and The Indian Mutiny, and if I'd had it when I started my WW1 projects, I'd have used it for those too. Although on reflection, I reckon we did use it when we did our garden trench raid game in 54mm back in the mid 70's. 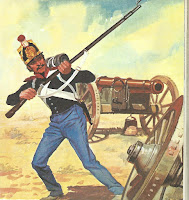 Flicking through the pictures now I can pretty much remember all of them, and honestly I think I'm inspired to try another period just because of them. This chap from the United States - Mexican War is animated enough for anyone. BTW, I've just noticed that good old Rene didn't actually draw the pictures, so kudos to John Berry, who did. Mr Berry also illustrated 35 Ladybird books and much of his work is now being recycled in those Ladybird for adults style books that clog up bookshops at this time of year.

Anyway, I think this picture inspired some of the younger lads in our school wargames group who, IIRC, did try to do this war using Airfix Napoleonics.

It is a bit of cliche to go on about how little we had and how much we relied on books like this in the 1960s/70s. Specialist publications were really expensive and usually obtained from libraries. (Fat chance of getting anything suitable in a library these days, but I digress). Although not cheap this book was in the affordability bracket for most of us, especially if we had an Aunt or Uncle who wanted to buy us a birthday present or would give you a book token.

So I'm glad to have a copy again. Now all I have to do is find this one:

*6/- means Six Shillings, a shilling being 1/20th of £1. I fully expect these denominations to be reintroduced as soon as we have sorted out this business with the blue passports.
** "Myths & legends of Ancient Greece", "Warships" and "Rockets & Missiles", since you ask.
Posted by Trebian at 18:22