Blimey Charlies, half way through December. My Christmas list is done and sent off to Santy but there are no toy soldiers on it this year.

I'm sort of at a half way house or something at the moment. I've got a couple of small projects underway but I'm not working on anything that's really new to take to COW. Okay, so I've been fiddling with the "Taiping era" rules, but that's it.

The Taiping project is at a funny point. I got back into it because I fancied doing the French for the 1860 Opium War. This hit the bumpers in spectacular fashion (much as a painting project can be spectacular) as I recounted in the post from late June. The momentum has been partially salvaged by the purchase and construction of the two most recent wooden Chinese buildings, and the accompanying painting project. However I haven't recommitted my cash to replacing the Lancashire figures, and the wind has gone out of those particular sails. I'm also acutely aware that what I really need are a lot more Taipings, and I can't get motivated for that. It's just a chore painting figures just because I need them some time. And it is nagging at me that I should finish the Lancashire French and then buy them some European opponents.

The painting table at the moment has a few projects limping along. I'm still working my way through the bounty from the Hereward show. The pressure here is the commitment I gave to run a game at the Society of Ancients Battle Day. I really want to be sure I've got no ringers in the ranks, so I've painted another 4 or 5 phalangite units, and I've got another 3 that I need as a minimum to avoid having some hoplites or Carthaginians filling up the line. Alas I actually need another box of Macedonian Phalangites to get that done properly as I'd rather not use any figures that have the pikes levelled as they're just a nuisance once units hit each other. I've also been topping up my Macedonian Cavalry with another three units of them done and two more in the pipeline. And some light cavalry from the Persian boxes wouldn't go amiss. Oh, and I think my Persian medium cavalry needs strengthening as those Successor armies have a bit of everything in them, don't they.

These plastics have supplanted my El Cid plastic project for a few months. That's also because I'm having doubts about army composition, and I'm not sure I'm not just painting figures because I've got them. There's also the issue of needed to convert  figures to crossbow men, as the Hat boxes simply don't have enough.

Which then leaves me with Edgcote. This is a project to produce a 28mm game using Wargames Foundry figures. I have a big bag of them in the corner of the room. 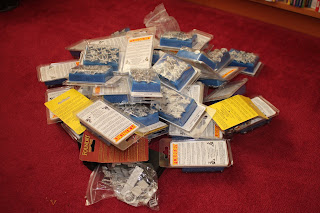 These were given to the Northamptonshire Battlefields Society by WF in exchange for a few books, which is a good deal if you want a pile of 28mm Wars of the Roses figures.

Phil & I are painting them between us and we have a not fully defined timescale. That means I just pull packets out of the pile from time to time and do a batch of a dozen figures. Phil is doing the basing once we've sorted them all. However seem to need some cavalry, which we don't have at the moment.

This is a bit of an odd thing for me as I can't recall doing a joint project before, - at least not since I was 11 or 12, probably - and knowing I don't have full artistic control is a bit odd. Sometimes it is  liberating and sometimes it isn't. Normally for a project I set an end date, put my head down and go for it. I'm having to learn some new habits for this, which I think should be good for me.