Edgcote-ing some more ideas about

Before the snow closed us down a little bit earlier than normal Phil & I reviewed the state of our Edgcote project last night.

My winter work shedule has been to break the back of the painting of the figures for this project. Phil has done a lot of the armour dry brushing and a few of the characters, but due to other commitments and issues on his part I've done the detailed work. This means I've just steadily slogged through the 200 or so figures we'll be using. There are still a few to go, and we need some mounted figures, which we don't yet have, but we're in a good place.

Phil has been experimenting with the basing. We're looking at 8-9 figures on an 80mm frontage in sort of three ranks. Three of these bases make up a standard unit for "Hail Caesar", which will be the core combat system we're probably going to use. 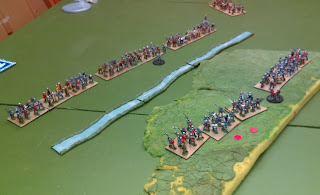 We needed some time to set out what we've got and talk about relative army sizes and so on. That picture above is most likely about the size we need to be for the battle part of the game. The units need to be deployed just in bow range, so that sort of sets the depth we need, and the width will come from the army sizes. 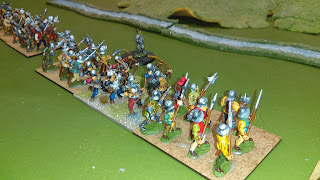 The basing obviously needs to be finished, and some of the figures swapped round. We're thinking of having a simple campaign game that will need army markers to move between off-battle locations. I think that fully armoured knights with some of Graham Fordham's "Fluttering Flags" banners will look rather spiffing. The reason for the campaign element is that there's a lot of interesting narrative to get across, and the battle has less incident than Northampton. We therefore needed a different approach to tell the story of why things happened and ended up where they did. 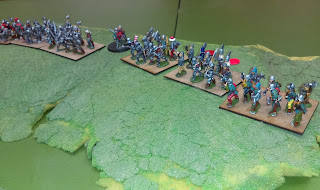 We ran a few test dice rolls, and we need some casualty markers. "HC" can be prone to massive swings in fortune based on a couple of die rolls, so we may need to temper that a little bit and we might need a few extra really useful rules. We may end up with some troop types and troop factors not previously seen under "HC", which, for all of the claims, isn't really a medieval set of rules. Well, not late medieval anyway.

So it all looks rather good.
Posted by Trebian at 11:51