Last week I had another of my regular nostalgic SPI style board game days with Gary. We had a go at WWW's "Decision at Kasserine". It provided us with 6 or so hours of entertainment before we discovered we had got the deployment really wrong. Some good mechanisms tho'. The German player (me) doesn't know his victory conditions until half way through the game. That's challenging.

It also had some rules I didn't quite grasp in terms of their significance at the start. I needed time to sit and look at the counters and the map with the rules for a few hours before playing, instead of being stuck in a hotel in Belfast.

This was a first time play for it. Like a number of games in Gary's collection it was mint & unpunched.

I am finding the counters a bit fiddly for my aged fifty plus fingers now, especially once we get stacks of counters attacking en masse. I think I was doing okay when we had to finish.

Gary remarked that he had a few (?) games from the Marlburian period - I had quite a good one on Blenheim I recall, back in the day - and I , noticing he had acquired a copy of Henry Hyde's Wargamers Companion, suggested we could do a table top WSS game for our next meet up in Shedquarters.

(Little by little we will turn Gary into a toy soldier man. Partly because the game units are less fiddly than cardboard counters. And also because it is easier to tell what units are if there are actually models of them on the table.)

Well, Gary says that's a good idea as long as I send him the rules beforehand. Of course, says I. It then occurs to me when driving home that I've never actually written a set of WSS rules. All I've got on my shelves suitable for the period are Black Powder and the rules Richard L was writing that I seem to have lost. So, technically, they're not on my shelves at all.

Light bulb moment. WSS is my project for the next COW. Fast (ish) play rule for my 20mm plastics. And I need a working prototype for the end of February.

No problem. A few ideas came to me whilst I was driving home, and some others whilst I was asleep. I've decided not to go "squared" this time, so that will present some challenges as I haven't done that for a while, so that'll be refreshing to try. An hour or two on Sunday was all it took to get most of my ideas straight. The core mechanisms are in place, capturing the ideas I want, I just now need to sort the fine detail.

I also need some more units. Alas it seems that Airfix Washington's Army are now very rare, and are going for silly money on ebay. Anyone who knows me - if you have any in an old box, regardless of paint condition, let me know.

Phil was able come over for a play test this afternoon. It was a fairly gentle run through, - we have other things to discuss on the Edgcote project as well, - so we probably got about an hour's play in a three hour period. It went like this. 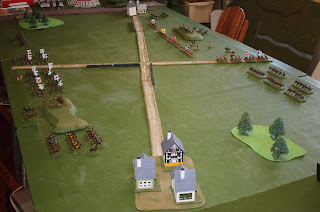 I'm the French, on the left. Phil is Anglo-Dutch, on the right. Most of my infantry is in march column. Phil's is in a mixture of march column or line. 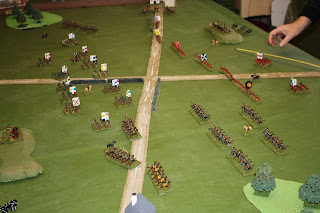 I set off with my mission to capture the cross roads. I needed to hold the flanks, or delay them, as Phil has more cavalry. And more guns. Which soon started to do a lot of damage (die rolling was lucky, but they are too powerful at long range) 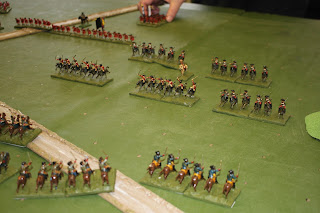 My cavalry is shaping up to face Phil's as they trot forwards. I aim to take him at the halt, and shoot him off with my carbines, before counter attacking. 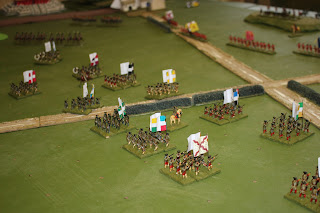 I'm pushing forwards in the middle, putting off the moment when I have to choose my battlefield formation. You can only fight in either line or attack column. Once you have deployed from march column to either of these you can't change formation again. Keeping units in march column keeps them flexible, but also vulnerable. 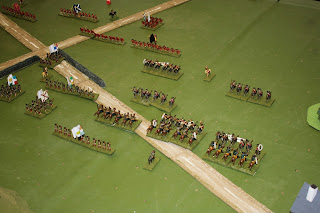 The cavalry clash at last. It's a bit raggedy as some British refuse to charge home. My carbines are reasonably effective. 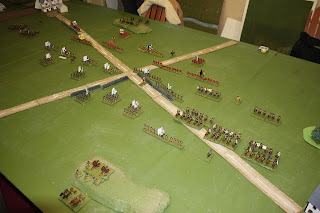 The centres are closing as the cavalry surge back and forwards. Lots of notes are being taken on the rule sheet. 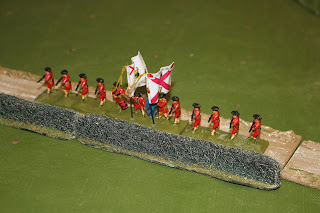 Photograph of British infantry lining a hedge because, well, why not? 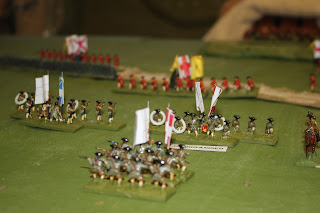 My lead units on my right are in attack column, but they've taken some pasting. 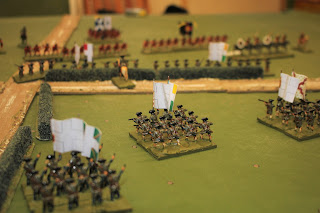 We're pressing on in the centre, hoping to overwhelm by sheer force of numbers. 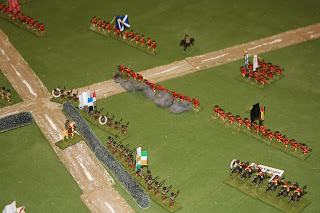 Finally, some infantry open fire. It's the British Grenadiers! 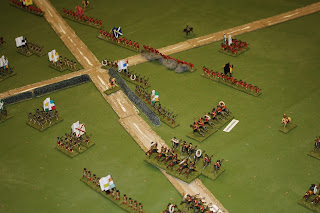 One of Phil's badly beaten up cavalry units tries to turn the flank of my line. They baulk at the charge order. 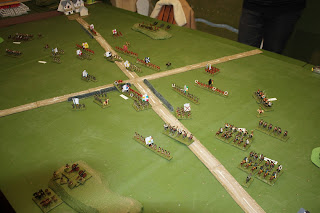 Some of my stuff is running away now in the centre and on my left. 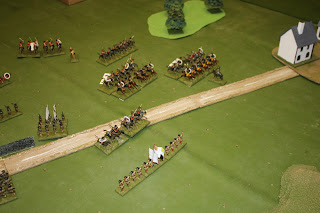 And my right isn't all that clever either. Time to finish with the British on top.

Lots of things to update in the rules, but they're definitely going in the right direction.

And Phil says he's got some boxes of Washington's Army he can spare. And some cuirassiers.