Yes. So. We did that game about the USS Pueblo, and Shedquarters stood in for the office of the Politburo of the North Korean Peoples Workers Party. 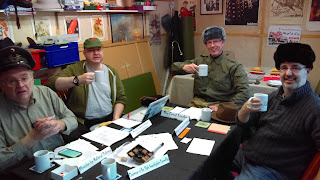 As you can see we were well supplied with appropriate levels of Socialist refreshments and all had suitable hats. At the head of the table Chris K was "The Great Leader". To his right is Nick, playing the Dear Son, effective foreign secretary. Phil is to his right, as defence secretary. Chris A is to his left, and he's head of intelligence. I was head of the committee that investigated traitors and corruption and was also the umpire.

This game was organised by John, a friend we all know through WD, who runs great free kriegspiel type committee games like no one else. This gamewas based on the North Korean seizure of the USS Pueblo in 1968. Historically this did not end well for the US. It was a massive humiliation and a major intelligence failure in that masses of top secret and, for the time, modern surveillance and encryption equipment fell into the hands of the North Koreans and their allies.

The set up of the game took a while. As we had four locations, - see last blog for details, - communications was key. As the mobile phone is ubiquitous (except for The Great Leader, who won't have one), text messaging is a central part of the game, and is how the foreign ministers of the various countries communicate, how intelligence is disseminated to the teams by the umpires, and how the actions of the teams are coordinated through the local liaison umpires. Together with Skype, which enabled a multi-location telephone conference for briefing and debrief, this enables a unique type of game to take place without the need for umpires scurrying between teams.

After the briefing we all had a chance to work out our aims before the game started. In reality it was 3 games, one each in Holborn, Sheffield and Shedquarters with a plumpire in Scotland. The games overlapped but also ran separately. In other circumstances I guess you would play the USA & South Korea, with the other reams reflected by umpire input, but this way drives the game with maximum player input and involvement.

In truth being the North Koreans may have been the easiest hand of the lot. If no one rumbled that our air defences were weak, that our armoured brigades were a bit shoddy, and we needed support from both China & the Soviets without giving up sovereignty we'd be okay. If you look at the original crisis the North Koreans play a deeply cynical yet perfect game. The USA has the biggest problems to solve, - after all, they're fighting the Vietnam War as well.

John altered the sequence of events, so we had the discretion to launch the Blue House Raid when we wanted. Historically this happened before the capture of the Pueblo, but in game terms it worked well that we could do it afterwards. Of course we did, and again failed to kill the South Korean President and some of the hit squad got captured This gave the US hostages to trade for their guys on the Pueblo. We denied any connection, and argued they were South Korean dissidents.

The US then tried to destroy the Pueblo with an air-strike. We shot off a lot of our SAMs, and managed to shoot down an aircraft. They also missed the Pueblo. Notwithstanding the failure, I reckon this was not a bad idea.

We were then desperate to rebuild our arsenal, and traded access to the Pueblo for more SAMs and "Tractor Parts" from both the Soviets and the Chinese. No problem that we discovered after the game that the Soviet SAMs don't work. We also held off both the Chinese and the Soviet from getting bases in North Korea (interestingly, the Russians thought we'd given in on this point. We just said we'd think about it, and then ignored further references. We have the texts to prove it.)

At the end I think we'd done really well. We certainly had an interesting game.

As for me...well I was a CIA mole as well, and spent half the game texting "game updates" to my CIA handler. Some turns there was nothing to say, so I just made stuff up. I did, however, manage to cast a lot of suspicion on the "Dear Son" and convince the Great Leader that the head of defence was staging a coup. I did get him to swap them in their jobs as a preliminary to me being promoted, but we ran out of time.

I could go on, but that's enough to give a flavour of the game. Not a bad way to spend a Sunday afternoon.