A Load of Cobras

Those who play these things regularly will tell you that SPI's game "Cobra", which covers the Normandy breakout is a classic, built upon the firm foundations of PGG. I haven't played the game for over 40 years, I reckon, giving it a couple of goes when I first received it in the post back when I was an S&T subscriber. Since then my copy has been moved around and lost (don't ask), so it was good to revisit it as one of the periodic hex games I play with Gary who I met on holiday. Actually a discussion of Cobra is what struck up our friendship, so it was about time we actually played it. 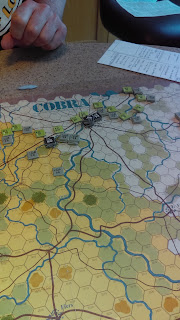 Cobra is regarded as a classic and is a big favourite with our American friends, mainly because it has Patton in it and also because it shows that Montgomery was a fusty old slowcoach compared with those thrusting go ahead types from the New World. It is regarded as a nicely poised game as the Germans try to hold a line to stop the Americans breaking out into Brittany before retiring, hopefully in an orderly fashion, to the East, avoiding getting caught in a pocket as the Allies rush to join up at Falaise.

The problem for the Germans is Allied airpower. As long as the weather is clear the RAF & USAAF  curtail German movement considerably. So much so that units are unable to disengage if next to an Allied unit as they don't have enough movement allowance if they're in anything other than clear terrain. This can be a bit of an irritant for the German player simply because you can't actually move a lot of your pieces for long stretches of the game.

On the other hand for the Allies it can be quite frustrating as the British half of the army, with all the mobile infantry and armour, ends up endlessly headbanging against Caen.

In our playing I got the Germans, and I have to say, - seeing as I'd only read the rules, not looked at the set up - that I took a long time to work out what I was going to do. In then end I resolved to disengage as much of my armour from in front of the British and Canadians as possible, and shift it across to get in the face of Patton's armoured thrust, whilst using well placed infantry units to hold up Monty and his chaps. Then, having roughed up the Americans, use the rather nice central roadway to hot foot it back to the East and escape, piling up the victory points.

Well, the best laid plans, etc. The game's weather mechanism provides for clear weather at the start, then you roll to see if it gets overcast or stormy. It stayed resolutely clear, most of the time. Bizarrely, both players roll for the weather, so it can be clear at the start of the German players turn, overcast for the Allies, then back to clear for the next German turn. Why the weather isn't the same for both of us is a mystery to me. Anyway, although I succeeded in getting my Panzers out and forming a mobile reserve they just sat there, mostly, crawling up minor roads at a snail's pace. In then end I gave up on my strategy. Gary was racking up points by overrunning my infantry line and so I thought I'd better get some points back by driving off the Eastern edge. I shifted most of my Panzers across the map, slowly (well, one turn of storms let me really motor across, and occupy the Eastern edge).

Elsewhere I'd got caught out as I had missed the fact the Major Rivers block ZOCs, so I'd left some holes up in the North Eastern corner of the map, which the British started to exploit. This is all rather odd. Major rivers block ZOCs, but do not hamper units when retreating. One of the safest places to attack from is with your back to a major river, because if you are defeated, you just hop back across the river into spaces where no enemy ZOC can kill you. Baffling, especially as there is a rule that alters the retreat rules for units in bocage.

Having held up the US Army sufficiently to reduce his VPs for getting off to a measly one per counter (instead of a maximum 6)  at the cost, alas of an SS Panzer division, surrounded and overwhelmed, I started to exit my units and soon had amassed a goodly 50 points or more, against Gary's high 20s. The game got even more odd, as it looked like I could earn victory points simply by driving my reinforcements onto the map and then straight off again. By now I was able, intermittently, to disengage some of my infantry and they likewise headed towards the edge of the board as soon as they could get on a road. I finally succeeded in getting 100+ vps, against, I think, 48 for the allies. That was by turn 10, and there wasn't enough for Gary to kill to catch up my score. So a German win by about 50 points. The vp chart only goes from 31 point win for the Allies to a 21 point win for the Germans. It's possible we weren't doing everything right.

Having said that I do recall an article or letter in a magazine when I first got this game that said it was stupid, as all the Germans had to do was run for it at whatever speed they could. This provoked some debate, but it is true that you are better off banking the vps for getting off the map, rather than risk your troops in combat.

Still, it was an enjoyable way of spending about 6 hours, and we did go from wondering how the Germans were ever going to win to total despair for the Allies. Perhaps it'll be different when we swap sides and play again.