A Marlburian Muddle, of sorts.

We revisited the War of Spanish Succession last night, using a revised version of the rules. So we could get to the meat of it all more quickly I deployed the armies in advance, rather than require players to advance in column. The results were mixed, but some new ideas came out of it all, and some mechanisms worked quite well. Of course we still suffer from the same old problem of me forgetting what I've written down. 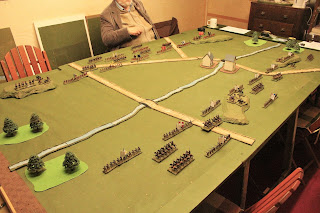 Will turned up first. Because I'm  nice chap I set up the Anglo-Dutch on his side of the table. Because I had been out most of the day visiting a relative in hospital I didn't have the chance to dream up a clever scenario or even reset the terrain from last week. 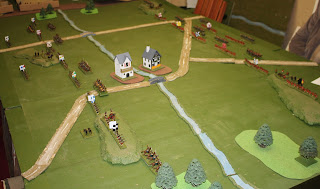 I have fiddled a bit with the game turn sequence. This means that when you set up as I have done here, with intermixed infantry and cavalry, the units appear to leap frog through each other but it seemed to work okay. 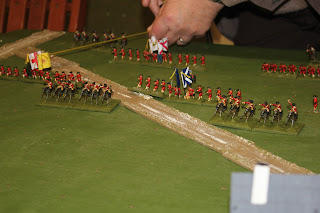 Will went for a general advance in an aggressive way. Play tests so far have indicated that the Anglo-Dutch perform well if they press the enemy hard. 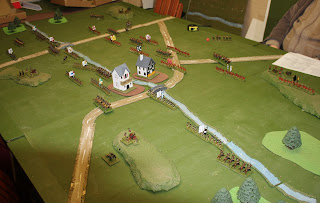 I got to the line of the stream first, and decided to defend it on my left flank, to take a bit of the sting out of my opponent's shock cavalry. 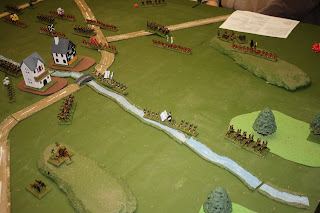 On my right I tried to exploit a slight numerical advantage with a wide hook, and splashed across the stream. 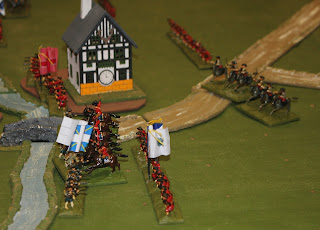 Around the village Will put in a charge against a unit of my infantry. The cavalry made contact and although being disordered by defensive fire still prevailed and drove the infantry back (I need to look at the factors here, - not entirely satisfactory). 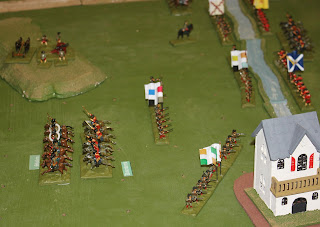 Phil had arrived by now and took over my position. In the centre will charged across the stream and broke the French horse. Elsewhere the infantry exchanged volleys and conversation was had about how to simulate the practice of inducing your opponent to fire first. 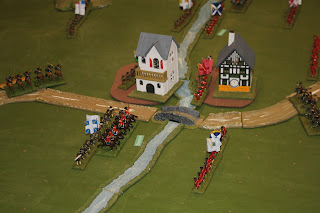 The French infantry by the village gave ground steadily. 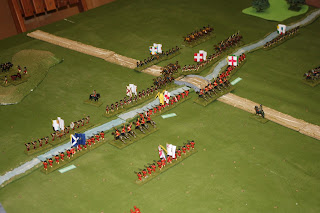 The firefight over the stream intensified. Infantry units cannot close with the  enemy until they have established fire superiority. 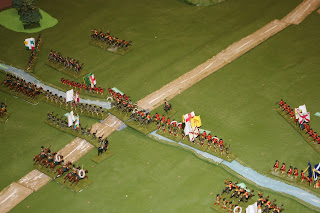 The Anglo-Dutch succeeded in forcing the stream line, but the French cavalry were able to extricate themselves and drop back behind their infantry to regroup. 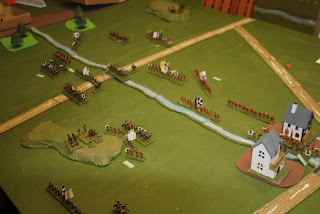 By the time we packed up the French infantry had performed fairly well, managing to close on their opposite numbers in several places and drive them back, whilst the Anglo-Dutch cavalry was besting the French equivalents almost everywhere.

A not entirely satisfactory game. Some aspects of the rules are functioning really well, others less so. I have an issue calibrating the precise values of the DRMs and how long they last for. The means by which cavalry can break off, rally and regroup need looking at again, as does probably a means to enable units to recover casualties.

In other news I have had delivery of a few packages of Washington's Army figures, receiving some from Will McNally via Phil (thanks Will) and also some from an ebay purchase arranged for me by my chum Tone.

I've also got some Airfix Cuirassiers luxuriating in a bath of paint stripper, and several boxes also winging their way from ebay too, - well 3 boxes for £10+p&p. Couldn't pass them up, could I?