There's Fahsands Of Them. Honest

So to the other reason I went to the National War Memorial Exhibition in Wellington on the Great War.

As part of  the Great War commemoration Peter Jackson commissioned a large diorama of the Battle of Chunuk Bair, which took place in the Gallipoli campaign on the 8th August 1915. This battle was a heroic feat of New Zealand Arms, although it ultimately lead to failure as the ground captured was later lost.

The Gallipoli campaign is a nation defining event for both Australia and New Zealand. It is part of what defines these two countries as independent nations. To say they are key to the national psyche would be an understatement.

The diorama scenery was built by Weta Workshops. The figures are 54mm multi-pose plastic, designed by the Perry twins. The figures were painted by volunteer wargamers and military modellers across New Zealand who signed up to receive a box of figures, paint them to a pre-set standard and return them. As part of creating a nationally relevant memorial for the centenary I have to say that I consider this to be a work of genius. This is a model commemorating a nation defining event, built by the nation.

I was disappointed that there was nothing in the exhibition that talked about how the model was built. I spoke to several locals at the exhibition, all of whom were unaware of how it had been put together, - a missed opportunity to talk about the collective nature of commemoration which should be something we do, rather than is done for us.

The pictures below aren't in any particular order. I didn't know a lot about Chunuk Bair going in, and it was hard to work your way round the exhibit in a coherent way, without going backwards and forwards. The display is open at the top, but with high perspex screens, as you'll see in one of the pictures. This means that to get good pictures you have to hold your camera above the screen and just point. It was easier to get shots by using the zoom for figures on the far side of the display.

The perspex panels also had stickers explaining what was going on, which were informative, but also block clear pictures.

Anyway, here are my pictures without the usual smart-arse commentary, and I'm pleased to be able to share them with you. This is a most impressive piece of work. 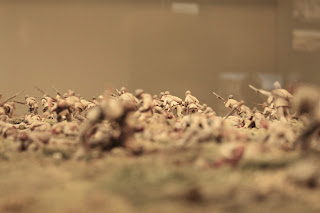 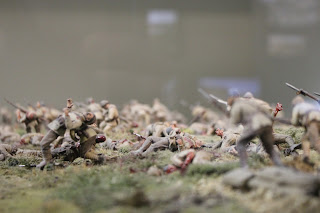 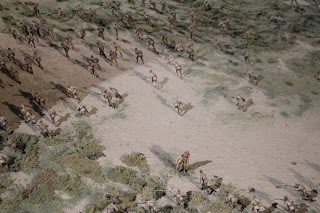 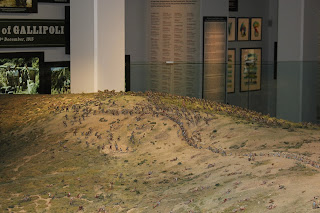 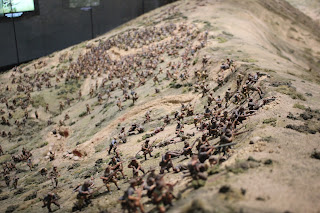 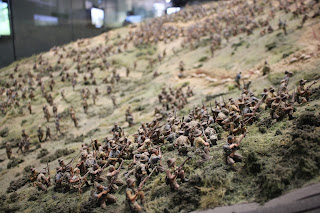 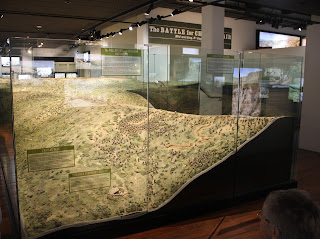 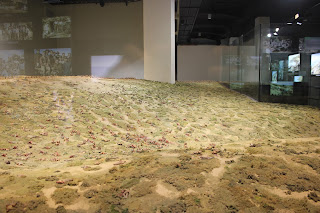 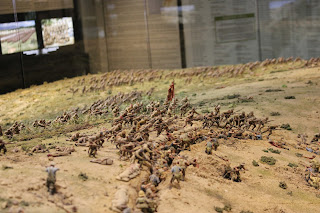 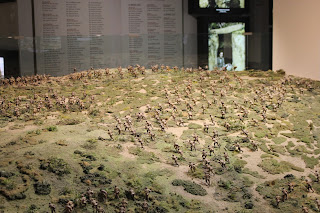 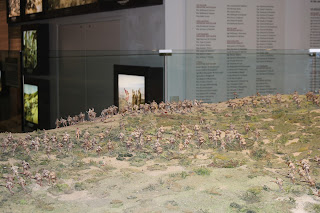 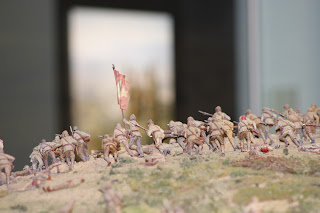 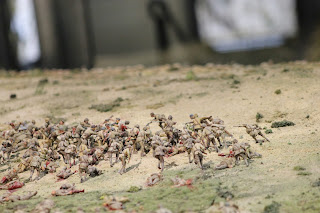 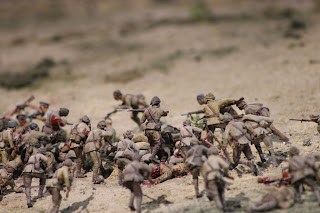 A final note. As I said above the Gallipoli Campaign has a national importance in both New Zealand and Australia. It would be easy to forget that other troops from other nations were also deployed and fought. This point is made in the exhibition in a board showing troops deployed. Alas my picture of this isn't any good, so the numbers from Wikipedia are:

So, as you can see, the campaign was mainly fought by British troops of both regular and service battalions from the New Army. As a proportion of population it is probably the case that the ANZACs were a greater percentage, hence the relative importance. Gallipoli casulaites are dwarfed on our war memorials compared with Ypres and the Somme.

There is a part of the national story, particularly in Australia, that basically still sticks to the line that the British were useless in the Great War, from the officers down, and that the only troops who could be relied upon to do anything were those from the Antipodes. I think that this view has been debunked in the writings of the last 20 years, but I have still found it in on-line resources from respectable Australian Military Museums.

There is a similar potentially sour note in this display. There is a reference to the Glosters wavering and being driven back to their trenches by the Wellington Battalion at bayonet point. Since coming back I can't find a reference to this anywhere (although I don't have access to the official history) and so I do not know whether it is true or not, or whether it falls into part of the Antipodean Great War superman narrative.

I do know that out of 1,000 men the Glosters took over 800 casualties, whilst the Wellingtons took 700 out of 760. You don't need to belittle the bravery of one group of men in order to magnify that of another.
Posted by Trebian at 10:39